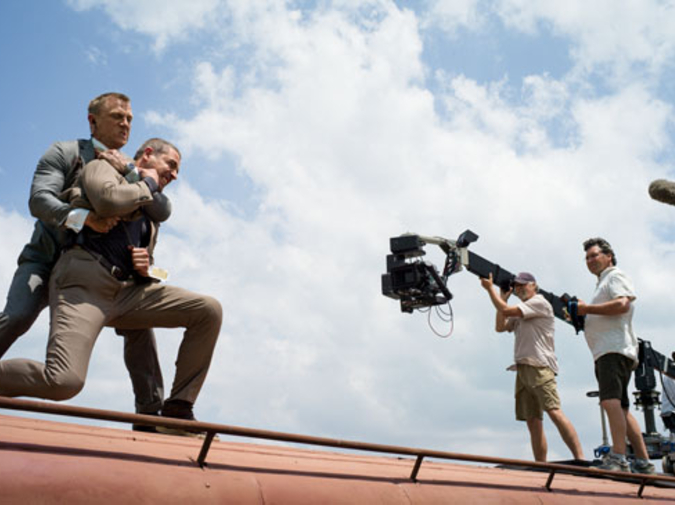 In 2010, we published Adam Novy's The Avian Gospels as two volumes, kind of Old and New Testament style. Having sold out of the two-volume edition, the book is now newly available, now been recombined back into a single volume with rounded corners, gilded edges, a ribbon bookmark, and Bible-style line numbering.

We are super excited! To celebrate, we are calling this "Adam Novy Week" and will feature an excerpt, interview, trailer, or some other kind of Adam Novy miscellany every day. Today: Adam has some thoughts on the most recent Bond movie, Skyfall. Purchase the book here.

I liked Skyfall a lot, but it lost its power somewhere in the middle and the final forty minutes or so were simply boring, in spite of all the explosions.

A problem with certain plots is that the strongest moment in the story may happen well before the climax. In Skyfall, the most important part of the film occurs at the very beginning, (SPOILER ALERT) when Bond is wrestling inconclusively with a bad guy on the top of a moving train. In a way, they’re like a single body, wrestling itself. Mum—Bond’s boss, played by Judi Dench—gives the order for a not-so-accurate sniper to shoot the bad guy, even though he’s fighting Bond in such a way that there is no clear shot at all, which Mum is quite aware of. The sniper misses, hitting Bond and nearly killing him. In this instant, Bond learns that he’s expendable to Mum, who he loves like his own mother. He represses this information for the rest of the film, and the movie seems to think that Bond cannot be Bond, and England can’t be England, in all their swaggering colonial immunity to conscience, self-awareness, and discretion, unless they stay repressed.

Not long after this happens, England’s spying headquarters is attacked by a terrorist mastermind-type who is revealed to be an ex-secret agent named Silva, who was alienated by Mum when she traded him for some hostages or something, I can’t remember, but the point is that she sacrificed him just like she sacrificed Bond. But Silva, who escapes whoever Mum sold him to, does not repress his anger and his grief, he prosecutes his rage through acts of vengeance, and by making funny bad-guy speeches. In a related matter, Silva is gay, no doubt because he’s actually thought about his feelings. Weakness, decadence, and homosexuality are treated by the film as one thing with many names, all of which are precipitated by an exploration of self. But the last thing Bond will ever do is think about how he feels. At the end, he actually weeps when Mum is killed, even though she’s thrilled to pull the trigger on him.

In another kind of film, this sympathy with the abuser would be almost too dark to bear—Samuel L. Jackson’s character in Django Unchained comes to mind, though Bond is not about race, but still, Mum does say KILL HIM and Bond sticks by her—but this is Bond, and all in good fun. And yet, the film begins to lose momentum when Bond brings Silva back to England, at what I make the hour-and-thirty-minute mark.

In other words, the audience and Bond learn all they’re going to learn in the film’s first fifteen minutes, and after that, there’s nothing left to do but watch the film repeat itself. The question is how to re-organize the plot to maximize the power it leaves dormant. The first scene—Mum giving orders to shoot—should be the final scene. The film should begin with the attack on Mum’s office, and Bond should be lied to by Mum about the bomber’s identity. The truth of Silva’s alienation should be gradually discovered, by Bond and by the audience, and Silva should explain himself at some point, so his story is actually a surprise, instead of how he tells his story now, which is cool, but leaves no real impression apart from the bit with the phony teeth, which, if you haven’t seen the movie, see it for that.

Bond and Silva should fight in such a way that makes ambiguous the distinctions between the two; the single body, wrestling itself. The film already flirts with this by staging the final (incredibly boring) gunfight in Bond’s childhood home, a sooty Scottish orphanage called Skyfall. Mum should give the order to shoot and Bond should be shot. This way, the best part of the movie would not happen with two hours and ten minutes still to go; the story would actually be dramatic. Yes, Bond would be alienated from England, but this would give the inevitable sequel something interesting to do, and also, alienation is a memorable note to end on. Have you ever complained about the end of Seven?

Not every story can have the climax be the strongest, most meaningful moment. Skyfall could have. It’s a missed opportunity.