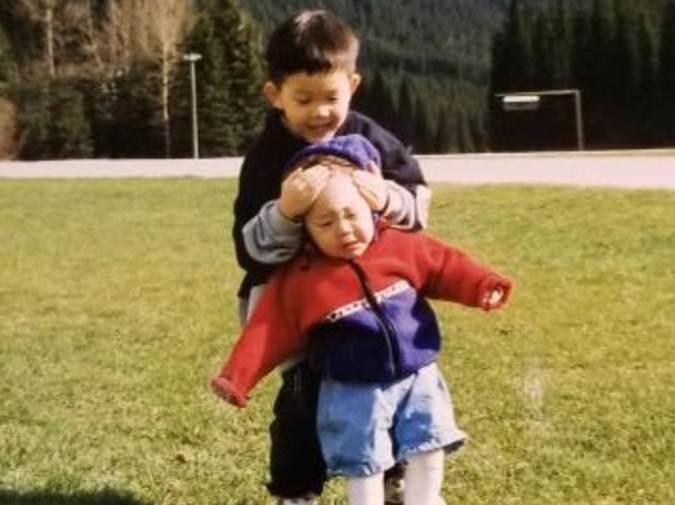 The events of the morning of are so tedious I’ll breeze past them to the part of the day I wish to remember in clearer detail. Perhaps “tedious” is a disrespectful word. After all, this is how my partner felt she was treated storming from the Pancake Haus before our coffees even reached us.

We had a crab dinner at my uncle’s that night. He bought six discounted dungenesses at the Chinese market which really weren’t that fresh. The meat was floppy and unsweet. But we were happy to all be together, myself and Abi, my brother and his partner, my uncle and aunt, my mother, my beautiful cousin, and a socially awkward newcomer just emigrated from Korea in search of UX work in Seattle. We crowded around the table, elbows knocking as we worked at claws and meaty shoulder joints, grinning over the heads of our white guests. Whenever my brother and I bring home girls (who are invariably non-Asians) my family has the tendency to softly prod in search of discomforts. Having been raised in the desert, it was Abi’s first time eating crab.

Fork or chopsticks? My uncle, the chef, posed before the meal.

Uhh, Abi swung her eyes towards me.

It’s eat with your hands. I whispered.

Abi grinned and proudly announced to my uncle with phony twang, I’m Appalachia people. Hands is how we eat.

I watched all evening as my aunt quietly slipped extra crab meat onto Abi’s plate (she was slowest at cracking the shells); as my brother put his arm around Abi in the kitchen; as my beautiful cousin tried hard to laugh kindly at Abi’s nervous stories; as my mother—dressed very elegantly, even imposingly—softened her suspicious looks at Abi as the others welcomed her shy offering of herself.

I’d been quick to anger in the morning, when she stormed away at Pancake Haus. In the corner booth of the restaurant, we whisper fought the ethics of hitting your kids—a staple of my own Korean rearing. I cursed, accusing her of high-horsedness. I seethed as the mostly elderly Caucasian clientele stretched their wilted necks to catch snippets of our interracial couple’s drama. Of course I grasped the value in Abi’s point, Why inflict pain when you can find a non-violent, a smarter alternative? But in her tone I couldn’t help identifying the implicit suggestion that her culture was better at raising its children than mine, even if it was completely imaginary.

I abandoned her in the parking lot, and almost didn’t come back to find her afterwards. We’d been at each other’s throats several times this trip already. This is what happens when two people dating suddenly spend every waking moment together. When one has come to meet the other’s family for the first time after only a short six months.

At the crab dinner, watching Abi flail at the center of my gregarious family, darting her anxious, smiling eyes from inquiring person to person, I perceived all the work she was doing. All the work I was not. I loosened the petty, tightened fist inside my chest, and gave myself a mental spank on the nose.

It’s late, and we’re in my father’s den-turned-bedroom, where I stay summers from graduate school. It’s musty. The adjoining bathroom is twenty years cigarette-smoky. The mismatched furnishings—cold bed, a desk without a chair, aluminum shoe rack, tatty maroon ottoman, empty man-sized gun safe, pencil sketch of a cow’s head—give a strong sense of the room as afterthought. Abi is snoring annoyingly on top of the sheets I aim to get under. To distract myself, I reach for a previously unnoticed photo album on the shelf above. I open it.

An old photo album, especially when unexpectedly encountered, has the eerie ability to remind you: You are not you. At least it can disrupt the solid sense of your memory as a reliable construct for meaning making.

In the photos, my family appears to be on a roadtrip. There are frequent shots of us leaning against railings with waterfalls, ocean views, grounded jets, and oxidized, Korean-looking statues in the background. For some reason, I count sixteen photos of just me and my mother clinging to each other in unremarkable doorways. It makes me wonder why. I realize how stylish my mom the architect was in her thirties, before her vanity calmed down. She has a high bowl cut hairstyle, and the most blasé sunglasses. Yet she smiles. My brother is three-ish and heart-achingly shy, his eyes make you want to cry. My dad is fatter and happier.

In almost every photo, I’m making a face. Demon, imp, gargoyle, fiend, gremlin, scamp; these are the moods I pitch at the camera. This is the only part of the album which resonates with my recollection of childhood. Always dicking around. 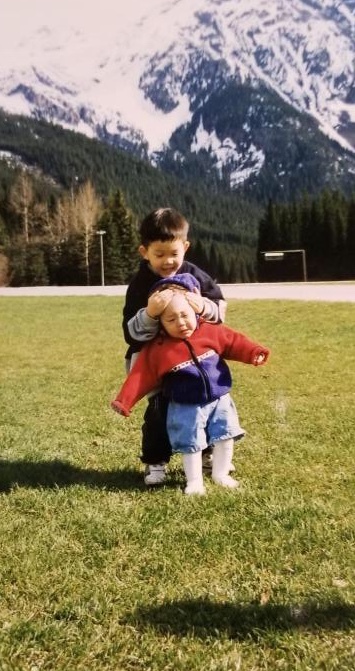 I come to a series of four photos which tell a story of my brother and me. We’re standing in the grass with a mountain looming starkly behind us. We’re wearing fleece zip-ups, his sleeves droop over his hands, I am a full half-torso taller. In the first photo, I am very nice with my hands on his tiny shoulders. He looks blandly happy. Photo two, I’m starting to pull back his hood; Evan is suspicious. In the third photo Evan is crying, his arms sticking out helplessly, as I tug roughly at his hairline with the flats of both palms. I look very fucking entertained. I remember then, the feeling of younger brother as plaything. How fun a game it was to win his trust, then violate it. Then also, I remember the fear and hatred for my father when he whipped me afterwards or slapped my protesting mouth so suddenly I barely knew to scream.

In the fourth photo, Evan is alone with the mountain, his hands in little fists, his hoodie unzipped, throwing a look of betrayal at whoever was taking the photo who didn’t intervene.

A loud snort returns my attention to the sleeping girl curled on top of the sheets beside my legs. She shifts a tad and makes a face like she’s having a bad dream. I shut the album, stretching to return it gingerly to the shelf, then place a soft hand on the skin of her thigh. It’s warm. Her face slips back into placidity. Her breath evens. I flick off the lights and find my way back to her in the dark.

Ryan Kim is an MFA fiction candidate at the University of Arizona. He is working on a novel about his great-grandfather Kim Songsu—a noted Korean nationalist.