A Problem of Vertigo 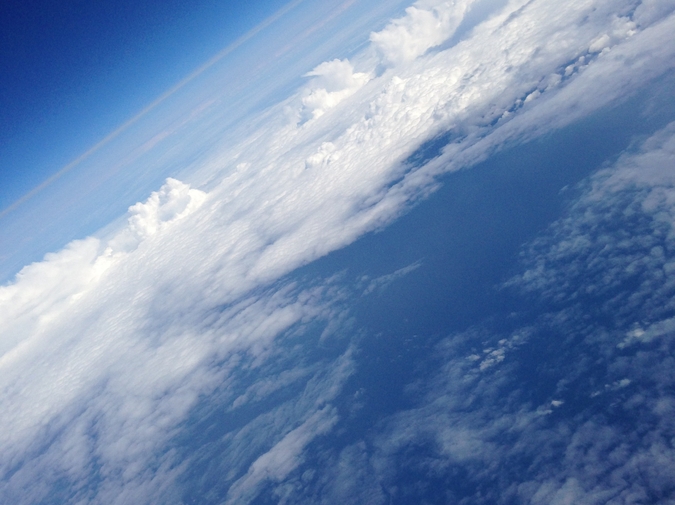 Fortunately, I never fell from the chimney. I never leaned too far forward over the edge of crumbling brick. I made myself small on that 3’ by 3’ platform, three stories high above the forsythia bush and the violets that sprawled over the cover of the sewage tank in the backyard. Back then I was always looking for new places to fit. Under cars. In broom closets. Under the staircase in the basement. I’d stay a while, marveling at the solitude, the aloneness, the way my body could be the brick of the chimney, be the ginger and cinnamon of the spice cupboard, the way my mother taught me I could be the body of Christ. She was the Sunday School music teacher and would teach us songs with phrases like, “I am the eye, I am the arm, I am swinging.” Her arm would swing, wild and elated, and a chorus of children would likewise swing their arms to the sky and let them fall.

I’d sit at the top of our chimney, plucking moss from between the crumbling brick the way my mother sometimes reached her thumbnail to her back molars to pick at something. How easily I transformed, then. How easily I fall, now. Or if I don’t fall, I have the sensation of falling. It happens in waves. When I bend for the shampoo in the shower. When I sit up in bed. During sex. In these moments, the world tips and summersaults. Gravity becomes a memory of that time when I understood how weight orients to weight.

I tell my mother I have vertigo.

My body becomes a territory we wander via small talk. It is a collection of aches and pains I submit to her as a peace offering. I await explanation. This is how she likes it. Diagnosing me, and me submitting to whatever shape she imposes. She is sixty, and studying to be a nurse. She shows me papers she’s written for her classes, the syllabi from her professors. I, a writing professor, never know what I’m supposed to say of these items, and so simply admire them. I think she is offering them to me as her own peace offering, as a small request for visibility.

So I tell her my stomach aches, and she blames a drug I took years ago. I tell her how anxious I’ve been lately, the migraines I’ve been getting, and she shows me a paper she wrote about mental health. If I have anxiety, it definitively comes from Dad’s side—his grandfather was in the asylum for seven years, and it can be genetic.

My first education about vertigo was from a novel. In The Unbearable Lightness of Being, Milan Kundera called it the “longing to fall.” He says, “We might also call vertigo the intoxication of the weak. Aware of his weakness, a man decides to give in rather than stand up to it. He is drunk with weaknesses, wishes to grow even weaker.”

I underlined: “Anyone whose goal is 'something higher' must expect someday to suffer vertigo. What is vertigo? Fear of falling? No, Vertigo is something other than fear of falling. It is the voice of the emptiness below us which tempts and lures us, it is the desire to fall, against which, terrified, we defend ourselves.”

My mother says I was a sneaky child. I’ve always taken it as a compliment, but I don’t think she means it so. What is the equivalent of “sneaky” in a grown woman? Quiet, perhaps. Unforthcoming. If I am unwilling to share, it is because I am tired of her disapproval. When she says, “Well, that doesn’t turn me on,” I want to laugh but can’t, because all she means is—I don’t understand you.

Only lately have I started to wonder if all she really disapproves of is a life that doesn’t look like hers. I’ve made choices she wouldn’t have made, and perhaps they somehow invalidate her own. The choice to travel, to follow a career. The choice to wait to have children, or maybe, not have them at all. The choice to love someone who doesn’t look like me. Perhaps they cause her to question herself, and it makes her uneasy. If a daughter rejects living the way her mother lived, is that a rejection of the mother herself?

I have a memory of riding a tandem bike with a boy in Yunan Province in China. We were gliding down a dirt path between stretches of farmland, and I thought no one knows I’m here. No one can see me. It was the freest I’ve ever felt. I could be the bicycle, the sky, the woman hunched over the dirt who looked up from under her straw hat as we passed, who saw me, who I saw.

But vertigo is a problem of the ear. The inner ear’s utricle and saccule detect gravity, and send signals to the cardiovascular system about how to direct blood flow in response to a change in the body’s position. Changes in one’s inner ear—infection, calcium accumulation—cause glitches in the machine. (The song we sang in Sunday School had a verse about the ear—“Hearing. Hearing. Small things. Hearing. We don’t miss much, hearing all the time.”)

There is something infantilizing about vertigo. These days, when my hands sometimes grope for something to steady me, I think of the Moro reflex, when babies’ hands fly up to counter the sensation that they’ve lost support, that they are dropping.

I wanted a body of brick. To rub brick in your palms is to rub your own skin away, is to master and observe your own undoing. I wanted brick the way I wanted what Kundera called “higher things.” I wanted the wideness of the world as it looks from the vantage of a chimney. I wanted more than what my mother had, and only realized later that this could look like dismissiveness, that that might matter.

When Kundera writes about vertigo, it is mostly in relation to the character Tereza. One of the most memorable moments in the novel is a simple one—Tereza gazing at herself in the mirror for a long periods of time, not out of any sort of vanity, but addicted to the marvel of seeing her own “I.” But it is upsetting to also see her mother’s features in her own, and the moments she stares long enough that they seem to evaporate are moments of triumph.

Vertigo, for Tereza, were those times when, “she was ready to heed the call and return to her mother.” For example, upon learning her mother is ill, Tereza considers going to visit. And when she doesn’t, we’re told that “several hours after the decision she fell in the street and injured her knee. She began to teeter as she walked, fell almost daily, bumped into things.”

Recently, I told my mother that I used to climb out of the bathroom window in the upstairs and crawl out onto the chimney ledge, where one slip of the ankle, knee, wrist, and I would have fallen three stories onto cement. Perhaps it began as another peace offering—I was trying to amuse her. We could laugh together at how crazy I was. Perhaps I was still trying to be unseen somehow. To disappear into caricature. Sneaky. But it felt more like a confession, or an accusation. Think of all I’ve done that you didn’t know, won’t know. She didn’t laugh. Her eyes grew wide with the body of years stacking like bricks into the wrinkles at the corners. Hers was a hungry sort of panic. She had the look of a woman falling.

Elizabeth Horneber is a writer from southern Minnesota. Her essays have appeared in AGNI, The Rumpus, Iron Horse Literary Review, Zone 3, and elsewhere.