A Phan's Notes: Rooting for Laundry 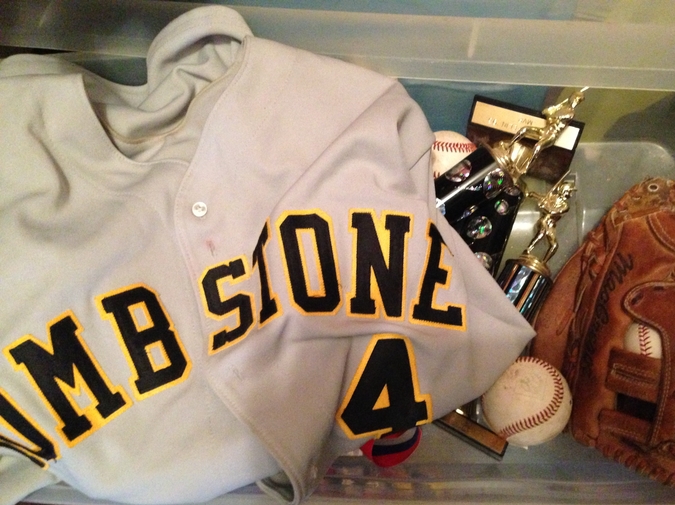 The Phillies recently came to Phoenix, the closest pro baseball city to me, for a four-game set on Mother’s Day weekend. I don’t have much in the way of obligations on that particular holiday, for reasons best discussed elsewhere, so instead of buying flowers or making brunch reservations, I drove seven hours from Albuquerque, arriving just in time to catch the second half of Thursday night’s tedious 2-1 loss. Sunday’s finale atoned for that, as the Phils fought from two down in the final frame to tie, then won on a Ryan Howard single in the tenth. It was the best Phillies game I’ve seen live since they rallied from three down in the ninth a few years ago in San Francisco, winning in eleven thanks to a series of bush-league miscues on the Giants’ part, an immaterial fact I mention mostly in hopes that it might nettle the Hobart’s web editor, an inveterate Giants fan.

I wanted to see the other two games of the series, but I had a funeral to attend. On Saturday, as Cliff Lee pitched the Phillies to victory, I was suited up in a church near my hometown of Tombstone, Arizona, watching my childhood best friend give his grandfather’s eulogy. If mentioning his grandfather’s death and a baseball game in the same breath seems flippant, I don’t mean it to: in fact, most of my memories of Grandpa Joe occur at baseball games, as he sat in the stands watching us play. My friend Marques is his oldest grandson, a year younger than me, and in the course of the decade we played ball together, his grandfather came to nearly every game, all over the remote reaches of southeastern Arizona — Morenci, Duncan, Warren Ballpark in our rival town of Bisbee, which those bragging Bisbee liars claim is the oldest ballpark in America — showing up early in his Lincoln, setting up his stadium chair, shaking a couple of hands, and then settling in to give the umpires hell. (Indeed, at the reception open mic, it seemed like everybody had a story about him getting kicked out of a sporting event.)

Not until after the ceremony, as a group of family and friends congregated at his house in Tombstone, did I realize that Grandpa Joe’s death had also severed my last real tie to my hometown. Tombstone is small and isolated, and despite its fame offers little in the way of opportunity; most of the people I grew up with have long since left. I’ve mostly avoided it myself in the twelve years since my mother’s death, because everything there reminds me of her. Driving into town, I realized I hadn’t been there in more than a year, and the last time had also been to visit Grandpa Joe and his family.

All of which gave me occasion to reflect, as I headed back upstate the next day, and as I sat for a few hours in the strident, ad-bedecked hangar that passes for a ballpark in a city like Phoenix, about our connections to cities. I often find myself wondering these days, thirty-odd years since my mother moved us away from Philadelphia, why I still root for Philly teams. And it’s worth asking why the thirty thousand other people in that charmless ballpark named after a corporate bank cared about the Diamondbacks. Why we cheer one team of total strangers and boo the other, why we care so excessively much simply because they wear a place name on their chests. Why we, as Seinfeld famously said, root for laundry.

Or some of us, at least. Exceptions are rare, but they exist. My friend Connor, who went to the game with me, is one of the most avid and knowledgeable baseball fans I know. He’s currently kicking my ass in our fantasy league, a 12-member coterie of current or former sports journalists in which I’ve yet to finish higher than 11th. While in any sabermetric conversation I’m reduced to making stupid jokes about GWAR, Connor is the kind of guy who, after four scotches, can still elucidate the difference between VORP and WARP; one of his friends is famous in statistics circles for inventing a prominent pitching metric. But Connor doesn’t care all that much about any particular team. He’s a fan of the sport.

And while I often wish I had such pure and lofty interest in the game itself, I can’t bring myself to watch a baseball game between teams from places I don’t care about. It’s not for lack of trying. I’ve been to at least a dozen non-Phillies games, everywhere from stately Fenway to the gloriously sordid Oakland Coliseum. I’ve tried taking in, say, a Rays vs. Royals matchup while waiting for the Phillies to start. I played baseball for thirteen years, long enough to appreciate the finer points of the game, to understand how hard it is to play consistently at the level professionals do; I should enjoy watching it as spectacle, but I don’t. Occasionally I’ll leave an A’s game on in the background as I grade papers, because I harbor a residual allegiance to them due to their Philadelphia roots. And if the Mets are losing, sometimes I’ll watch out of sheer schadenfreude. But unless the Phillies are playing, I don’t really care.

I wonder whether that sort of allegiance depends on having once worn the laundry. Connor didn’t play baseball past Little League, in part because he went to a big high school in Phoenix, where other pursuits — debate, drama, academic rigors — beckoned him away from sports. In Tombstone, the alternatives to sports were drugs and impregnation, so I played three sports through middle school and high school, spent season after season wearing Tombstone on my chest. The last time I took the jersey off, on the bus after a one-inning playoff to make state, I had just fielded a squeeze bunt from first base, too late to make the play at home, and had held the ball helplessly as the winning run scored, ending my baseball career. It seems maudlin to admit it now, but at the time I was seventeen and hadn’t yet been educated in the scale of loss: I held that jersey to my face and wept.

Later, I stole it. Tombstone was a pauper’s district, and we weren’t supposed to keep our jerseys. They needed to use the same ones year after year. But I kept mine. I still have it. I’ve held on to it for fourteen years, through dozens of moves, even as I’ve shed so much else that reminded me of who I used to be. I couldn’t tell you why, exactly, but it seems like the same impulse that makes me root for the Phillies after all these years. Even if you don’t have a hometown anymore, you still need a home team.

Justin St. Germain lives in Albuquerque. His memoir, Son of a Gun, is forthcoming August 13th from Random House.