A GHETTO-LIKE STATE OF INCOMPLETENESS: MY STRUGGLE WITH MY STRUGGLE, BOOK 3 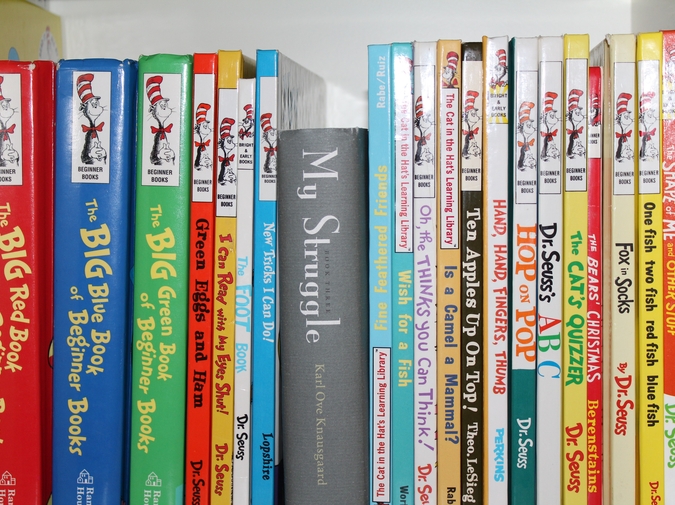 Against what, exactly, is Karl Ove Knausgaard struggling? I tell my medical students that you can never go wrong answering a patient’s question with “it depends,” and this advice applies to the question I’ve just posed myself. In the first book of My Struggle, Knausgaard’s struggle ranges from the most trivial (a teenager longing for beer) to the most life-defining (an adult staring down his family’s demons). In the second book, a lover struggles to connect with his soul mate, a man struggles to maintain an identity other than husband and father, and an author struggles to write something meaningful. Just a few pages into the third book of the series, subtitled Boyhood in the version I read and Boyhood Island in an import version I found online, Knausgaard focuses his struggle on a singular entity that, in retrospect, looms over the first two volumes as well. His struggle is against memory, and as much against what he is able to recall as against what he cannot. “From all these bits and pieces I have built myself a Karl Ove,” he writes. Is this how we all form our identities? Do we take what we remember and agonize over what we can’t, until we ultimately fill in the missing gaps to align with the narrative we want for ourselves?

It depends, but this retroactive storytelling, in the very least, applies to how most of us process childhood, which Knausgaard calls a “ghetto-like state of incompleteness” at the end of his introductory notes to Book Three. It’s one of the few memorable phrases in the book; from this point onward, he writes in a straightforward, linear, non-embellished fashion about his years growing up in Tromoya, from his earliest pre-school memories to his last school party, at age 13, just before moving away from all of his childhood mates. This change in style from the sprawling, tangential language that fills the first two books of My Struggle is jarring. No longer do we have page after page of internal deliberations or erudite literary conversations, the stuff that propelled the essentially plotless first two books. In Book Three, Knausgaard’s recollections of boyhood jump from one episode to another episode to another episode and so forth. Each scene is relatively quick, and the dialogue is short and matter of fact, the way children speak to each other.

The book, like the first two volumes, is still subtitled a novel but reads like memoir, which is a testament to Knausgaard’s storytelling. He must be embellishing and recreating some or most of the events he recalls, but the pieces are put together so neatly and the episodes themselves are (usually) so unflattering that he seamlessly enlists his readers into the struggle against his memory. One of the most memorable scenes in Boyhood Island (I confess, I wish I had the import version) comes when he and his friend, Geir, are double-dating two girls from their class, Anne Lisbett and Solveig. Knausgaard rarely bookmarks his scenes with “I was X years old” or “I was in X grade,” but the four children are somewhere between five and seven years of age as they tromp through a creek. Karl Ove is obsessed with Anne Lisbett.

“You’re sailors,” she said out of the blue. “And you come home to us. We haven’t seen each other for ages. Shall we play that?”

I nodded. Geir nodded, too.

The two girls jumped onto land and went a little way into the forest.

We moored, leaped ashore, and walked toward them. But we weren’t quick enough for them, Anne Lisbett was impatiently dancing from one foot to the other, she set off running, toward me, and when she reached me she threw her arms around me and hugged me and pressed her cheek against mine.

“I have missed you so much!” she said. “Oh, my darling husband!”

She took a step back.

The moment is so cinematic that, of course, a forty year old would still remember those exact words (“Oh, my darling husband!”) and the exact feeling of having those words spoken warmly into his ear. What comes before and what comes after, including the two girls dumping Karl Ove and Geir for an upgraded duo of more popular boys, scan as Knausgaard’s memories plugging the holes around these precious words.

Raising children forces me to think about memory. For example, when my wife and I let our infant son “cry it out” rather than rushing to his crib to comfort him, we tell ourselves that babies have no emotional memories. They can learn, but they can’t remember. So say the books that help us get our son on a sleep schedule – he will completely forget by tomorrow morning that he was upset tonight, yet he will learn that crying does not automatically retrieve his parents. More devastating is that my three year old daughter would have no memory of me or my wife if either of us died. It’s a morbid thought but an inescapable conclusion: I remember nothing before the age of three, and neither will she. Everything we’ve done to build up her love and trust, our silly bedtime rituals and inside jokes, her first three birthday parties, our favorite books to read while she’s using the toilet, the utter delight she had upon first hearing “Libre Soy” (the Spanish version of the ubiquitous Frozen song, “Let it Go”), the special treat of adding strawberries to her Cheerios, like the picture on the cereal box, none of this will stick to her.

In this very journal, recently, a poem asked, “What if the reason we can’t recall certain events is because the other person attached to them doesn’t want us to?” Taken literally, the question evokes metaphysical tales about memory, films like Eternal Sunshine of the Spotless Mind and Groundhog Day. On a more evocative level, though, the question suggests that memories are not individual but rather communal: memories must be shared with others. So say the books (The Sense of an Ending, Atonement, and So Long, See You Tomorrow, for example) and the music (“Norwegian Wood,” pretty much everything on the first two Arcade Fire albums, and A Tribe Called Quest at their peak) and, ultimately, the other players in our memories.

To that end, how would Karl Ove’s classmates share his memory of the party that concludes Book Three? In the basement of a friend’s house, all of his classmates cheer him as he heads off to another part of Norway. He will never see them again – he and they both know this – and the boys and girls, who have at times been his best of friends, at other times been his cruelest of tormentors, now all come together in a bacchanal celebration of Karl Ove. The girls, he remembers, eventually take off their shirts, and then they remove their bras, and they dance around him in a circle. He sits in the middle of them, as each has a turn on his lap, planting their prepubescent breasts in his face. The boys stand aside, watching with approval, occasionally nodding at Karl Ove, as if the entire group has voted upon his final gift. Granted, this bon voyage to a 13-year-old occurred in the 1970s and in Norway, but the scene is so odd, so hazily painted from Knausgaard’s reminiscences, that it almost feels like a dream he had at the time rather than an actual graduation party.

To that end, how will my own children remember the “ghetto-like state of incompleteness” that they eventually call their childhoods? Often I remember something from my boyhood island, and my parents or brothers refute that memory. “That’s not exactly how I remember it,” they say, or sometimes they simply deny the entire memory altogether (“I’m sorry, but I don’t remember that at all”). What am I supposed to do with these unapproved, incomplete memories? And what will my children do, years from now, when they swear up and down that something happened when they were kids – something sweet, I hope, something cherished and funny, some story whose underlying message is how happy they were as children – and their father looks blankly at them? I will have to respond, “If you say so, then it must be true,” because it will be the luckiest thing to be the other person attached to their memories.