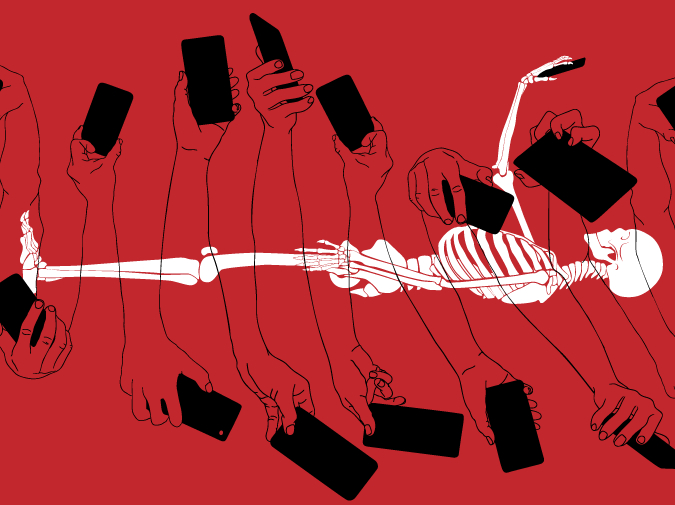 Only 498 words remain. So, let's turn to death. If your social media presence isn't what it should be, then please consider the ultimate boost. I know what you're thinking here at word 34. In the past six years, worldwide, 259 people have died by selfie. I imagine far more have tried than died. Still, what accounts for this shockingly low number? Maybe most of you are not athletic enough to pull it off. It's just too hard to pose and die. No, don't kill yourself for social media.

We still have 407 words left but words don't count for much, do they, when we can have pictures. I think of my brushes with death. The only thing that would have made them better is a camera. There were no cell phones to record me yelling "stop yanking my leg" at my little brother as we climbed our grandmother's roof only to realize 220 volts of electricity are coursing through me and the exposed wire touching the air conditioner cage is the culprit. My first encounter with an improvised neti pot sent scalding salty water gushing into my lungs, and then—seconds ticked by—I had to choose either to suffocate on the kitchen floor of my attic apartment or to break my neck after passing out while attempting to run down to my landlord's for help. I wasn't thinking "I should record this!" but how many days will it take for her to discover my body, naked and broken, on the stairs? I couldn't have lived with the guilt of not being there to explain how it had all been just a silly attempt to clear my sinuses. Then there was the incident at the precipice on China’s Great Wall two summers ago. A camera would have been good.

Batteries are lasting longer. Cloud storage is cheap. 5G is around the corner. And I only have 184 words remaining to tell you that planning your death around your social media calendar is absurd. Why miss the live concert you've paid good money to see, as you stare at your phone, recording the whole thing? You could be that fool, but why? It's no way to enjoy life. A better strategy is to automate your recording and streaming— monetize.

I have carefully placed ten cameras in my house that record absolutely everything. Did you know ten is also the paltry number of people that have died while live streaming? Still, I believe we are on the cusp of a golden age of dying on camera. I am notoriously camera shy and I'm not after fame, or to document my life, but I need to ensure my death doesn't go to waste—even if I go like Elvis. The cat food won't pay for itself after I'm gone. So, with my remaining 19 words, go ahead, ruin your life. But I urge you, don't waste your death. It comes for us all. But only the prepared can wring immortality. That is my last word.1

1 As cameras can extend at least an echo of our lives almost infinitely into the future, footnotes are a way to extend a text, reprogramming it past its limits, much as Captain Kirk did to beat the Kobayashi Maru no-win training exercise as a Star Fleet Cadet. No, he didn’t cheat death—but he gained immortality. I gained 60 more words.

Dimitry Saïd Chamy is Haïtian born of Lebanese descent and grew up in Port-au-Prince before immigrating to the United States where he is currently a resident artist at Florida International University in Miami. He is a noodler and doodler @2urn_ on Instagram. His first book of illustrations is out in the Fall of 2019.