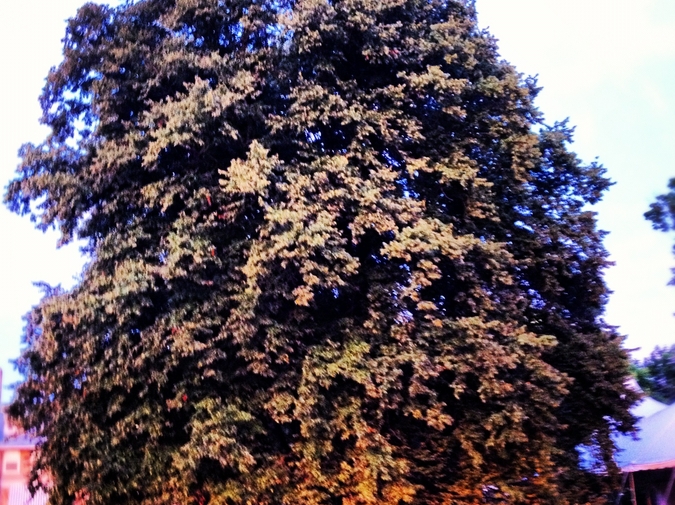 I. There’s a message from home—a place we call Pineapple for the two kinds of trees that hide it from the river. It’s a clipping from my father. No greeting, just a photo and a little obituary for a 3,500-year-old cypress. So tall and hollow, some called it the Senator. Down in Seminole County this third Friday in January, the Senator has vanished, burned inside out without anyone noticing. There is talk of lightening, or worse. Self-immolation. The photo has an agronomist peering into the blackness with hesitation, as if expecting Columbus.

Even now, on his back, in his chair, my father might be squinting at the void. Enlarging the blackness until his screen goes dark and his eyes close tight against the question of what remains. Of planting season, and whether to plant at all. My mother might be asking about the bridges and the traffic and was there a problem.

II. I’m following a diamond-tipped saw through the woods behind the orchard. Around an old well and up, up into a meadow covered with gravel and coiled hoses and the curving tracks of automated sprinklers. The agronomist is breathing hard as we reach the farm. Or what remains of the farm—weeds as tall as the pines, sprouting a purple flower I can’t name. I take the saw and don’t ask because the scene before us now has the look of a war I saw once. The last, somehow-cratered greenhouse robbed of its propane heaters. A dozen broken ribs. An acre of moldering plastic. A solitary lamppost. An animal grazing along a stretch of concrete stretching all the way to the county road.

III. The agronomist motions for the saw. He’s down on one knee, Hawaiian shirt billowing in the heat. The sunbonnet meant to shield scars on his neck means I can’t get a look at his eyes. The saw jerks, then coughs. He adjusts the choke. He wants a piece of this ground. The end of the concrete and his millions of baby trees, more species than I could count on one hand. Five hands mark this farm, plus the impression of a dog’s paw. January 1990. I wasn’t yet 10. Our signatures would multiply. Blueprints for the house on the hill; a mortgage on a vanishing view of the river. The whole dream so far underwater, the bank might not go there, says the lawyer.

The saw springs to life. The blade is enormous—two hands across, maybe three. The concrete came out thick that day. It clung to our fingernails under a spigot in the far corner of the meadow, where my mother wouldn’t bulldoze. The cutting is deafening and jagged and interminable. I take a turn at the saw, which is overheating. The agronomist disappears into the weeds; reappears with a brown carton of rainwater, the remains of a company picnic. We both get drenched with the mess, and then the saw gives up, but not the agronomist. There’s a pickaxe from the truck that I’ve brought around from the house to haul away what remains, and he begins slamming this against the ground, cursing now, yelling for it to break free.

R.B. Moreno teaches writing at the University of South Dakota and edits nonfiction for South Dakota Review. As of 2013, his father is back at work on a tree farm in the Pacific Northwest.