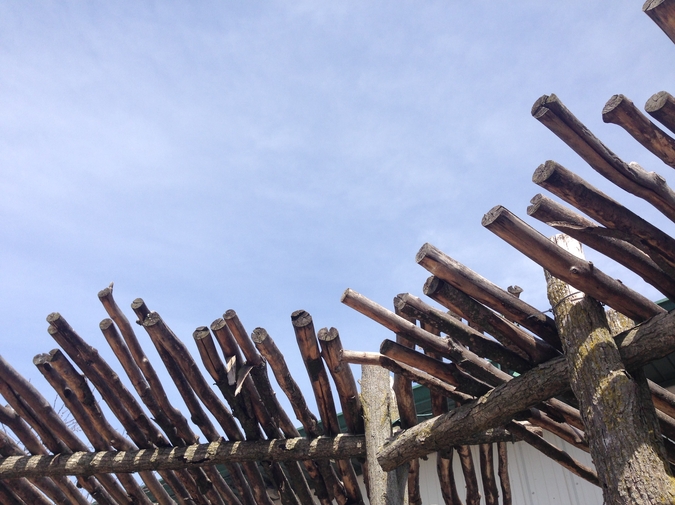 Imagine if you can, "a dirty house in a gutted world," the poet said, which what the poet said is precisely what I saw when I stopped to look around while listening to reports from the BBC and ironing my favorite lavender blouse. A gutted house in a dirty world, I thought, and here I am: another story about saving for retirement with my elementary school calculator tucked away in my top dresser drawer. The bank clock is hooked up to a computer; it sits in the hot sun without a sensor. I rarely clean at the end of the day, but on the weekend I make the floors shine and do thousands of sit-ups, flexing my buttocks so that it will be sure to stand up in shorts. Here comes the wind, o house of cards, and here comes the shell of my skin separating from my ribs like a percussive blowback, like tumbleweed, like blackjack. I still flip for accents and stay that way. I'd like to start over, reset my relationship to Great Britain, base it in some real facts. (Or is it the United Kingdom—remind me of the difference—or how do they think about it in Wales?) I'd like to stop thinking about it, stop communicating via various LED lights, black out and regain consciousness in the middle of my baptism.

The Finales of Seem

That was what the poet said, of a warmer climate, where elderly gangsters do not stand trial as their portrayal in upcoming films is debated, but also where the passive voice is as okay as a warm banana salad. (Avocados do not slide so easily down into the grill.) I walk that walk, in Connecticut counting bottle caps, in Massachusetts licking honey from a spoon, in Vermont nibbling duck tacos over the river that divides New Hampshire from New England’s more civilized corridors. I'd like less listing from politicians. A sculpture of a leaning tongue, made of mulch, my lover walking me toward. He loves texture. Also, the way my shirt catches my skin when I sweat. He loves that. I look like a woman ready to shoot up the bar. I talk out of the corner of my mouth and shovel coleslaw in my craw before the bartender dims the lights and we are free to sway in the heat.

Call me Jerome. I am the best lion. The poet doesn't speak to me, but at the same time he does, with his fire and his glad-handing of the official wiener. I want to be a moral woman, a woman of the cloth and not the rag. The rag and bone I want to pass freely through my flesh, as though I am the most fertile of the world's snakes, the one who tricks herself into leading. The best hat-wearing lady of the theater. Tonight is the night that all of the visions become one. Tonight is the night that the lion calls me Jerry, that he licks me without getting me wet. Everyone in line with meat. Just take your time, I was told, when I was in pigtails and growing patches of blond fur. Now my bones are dressed with the pinguid flesh of a grown mammal and I've seen all the players. They came together in a final convulsive bow when the curtain went down. My hands were on fire between my legs.

The poet paused to explain an analemma. It was his reading. He wore a sweater. It was now clear to the audience that he had at one time looked up the word analemma. He had read it somewhere, and he looked it up somewhere, and he had reproduced the word in his poem, as the title of his poem.

I'm not even Egypt. Most of what's best for me left peacefully. There was a thrill, which I remember required glass, and in the end the thrill was better than I was. When I am leftover, I am the sauce boss. The poet said something offensive to a woman in 2008, right about the time someone published some short sloppy poems of his. The woman was Muslim. He was trying to be above board about someone else's shortcomings. Mistral's prose poems are not about sharecropping, but they have been misinterpreted. The implication is that dictatorial policies are just as good as democratic processes, but it’s just that those processes are at odds with dictatorial stability, which can look like choking a woman. Choking women behind glass or on screen can be a statement (artistic) about choking women if the choking looks right.

Thomas Cook is co-editor and publisher of Tammy. He lives in Greenfield, Massachusetts.