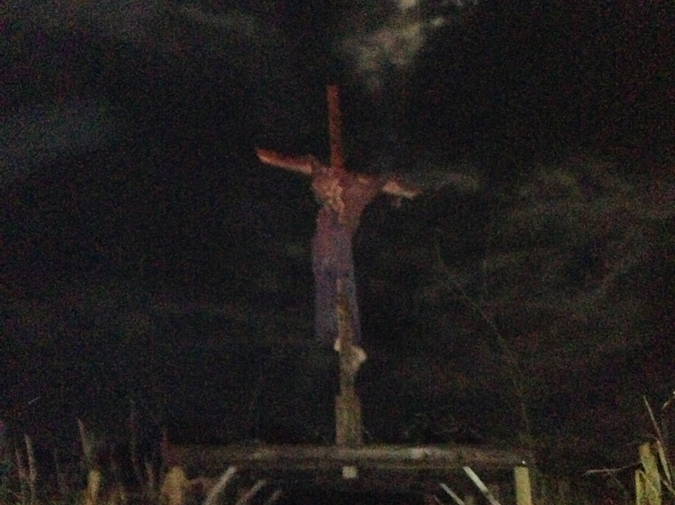 The Springfield Fire Department Reminds You to Be Prepared for Earthquakes

Even though Vachel Lindsay drank
lye and died in this room we
make out for a few minutes when
the tour guide leaves. It’s sad,
but there’s a bed and we’re high
on poetry and the hour long drive,
your hand resting on my thigh.
I close my eyes and see Lindsay’s
visions of Old Testament prophets,
his delusions and his fears, feel
your body angled onto mine like
it was last night in the heat and
dark. The earth’s moving, though not
the way it did on Feb. 28, 131 km.
south, which Lindsay may have
deemed the end of the world
if he had not already left it. At least
in this house there are no life-
sized statues of the dead and gone, as
earlier, at the museum where you slipped
your hand beneath Mary Lincoln’s
ruffled skirt and twirled me into
the street under you arm. The tour guide
inevitably returns to take us back and
I pause in the doorway, practice
holding up the house as if
the shaking has not yet stopped,
as if I could know what would
happen next, and be prepared.

It’s not enough to bathe the body
in salt, to place in the space

between rib and backbone the bread
and the sage, to slide the pan

in the oven and wait the span
of a 1,000 piece jigsaw puzzle.

nearby. Do not douse with water;
cover and let the flame burn down

to the bone, the crackling skin.
Pay close attention. It is not enough

to add butter and longing every hour.
Instead, you must lower the body

slowly, away from the house. Sing
your song and move on.

The dentist has injected more
then the usual amount of Novocaine
into my lower gum because
I have been too busy defending
the faith to brush my teeth
regularly. I can speak only
through one side of my mouth,
like the devil, who I repeatedly
exhume from myself by spending
so much time on my knees
that in 1800 years the damage
will still be seen. When they open
the glass case and remove
my third century reproduction robes
they will see that I am who I said
I was. That I was 24 years old.
That I used the right hand more
than the left. What I want to know
is this: did I pray long enough to stop
the longing for the converted Roman
centurion to slip his hands under
the scratchy fabric of my dress? To shove
me against the wall before we entered
the coliseum and declared our love
of God and death?

The Faith of the Roman Centurion

Today Jesus has performed 12,100,000 miracles
on Google. In .38 seconds, he has stretched out
his hand and healed at a distance the servant,
the little girl, the mother-in-law. He has warmed
my hand on the television set, through the man
who has promised healing if I confess.
Though I am paralyzed, I kneel on the hard
wood, palms against the grain, the bone-colored
sponge, making everything clean for the one
who takes possession next: my home, my heart.
Though you rolled me over in the morning
when I couldn’t move, though you held my ribs
between your hands and drew my breath, still
you have gone and not returned. The phone
lies prostrate on the floor, my back against the wall,
arms not willing to lift themselves. It is a state
of being. Helpless stoppage, inability to act.
Have you gone to find help? To tell the Lord
I am lying at home, fearfully tormented?

Jesus Heals a Woman in the Crowd

The plastic babies in jars must mean something
though I don’t know what. The spotlight’s
ordinary light might bring them to life, bass
beating out their hearts, guitars shrinking
the insides of our eyes – it’s heaven again
because the music’s so loud I can’t
remember the thing he forgot to tell me.
He’s jumping up and down in place like
the floor’s a trampoline, though it doesn’t
move me, the laws of physics refusing.
Even Jesus and his sad beard, his inexplicable
robe can’t shake me, or won’t. The babies
shudder, though they are neither happy
nor sad, neither touching nor needing
to be touched. Even if my fingers brushed
the hem of his garment he wouldn’t feel it.
There are too many things to feel, too many
spaces where the love slips out and spreads
into the undulating crowd.

Marci Rae Johnson teaches English at Valparaiso University, where she serves as Poetry Editor for The Cresset. She is also the Poetry Editor for WordFarm press. Her poems appear or are forthcoming in The Collagist, Redivider, Redactions, Books & Culture, The Valparaiso Poetry Review, The Louisville Review, The Christian Century, and 32 Poems, among others. Her first collection of poetry won the Powder Horn Prize and was published by Sage Hill Press in 2013.