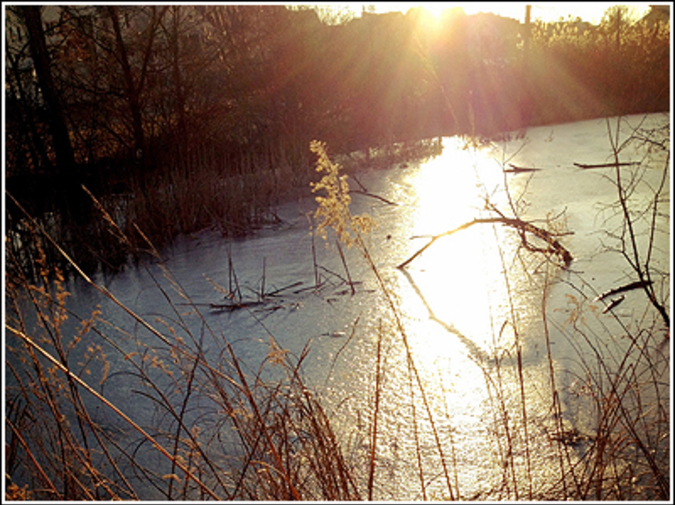 The river by Anne’s house, the Clark Fork, was swollen up with people. It was the first day of true summer heat, the sun at last a rival to the bite of mountain snowmelt that made the water inhospitable to all but the most dedicated of recreators. Now there was a winding line of thick black rubber inner tubes, bumping up against one another like drunken turtles. Anne watched out the window. The floaters writhed palely atop the tubes, shrieking, splashing, the blank sun glinting off their skin.

Her daughter, at the table, was annoyed. She was twenty-five, dressed in white, recently engaged. The fiancée was in the bathroom and had been running the water for nearly half an hour; he was good-looking but haunted by fear of hair loss. Anne last night had heard the frantic creaking of the bed from down the hall, in Eliza’s old room, and all morning had been wanting to make a joke about her daughter’s virginal white dress, but was holding her tongue. She did not want to invite a lecture. Eliza was strict about such things.

The fiancée came out from the bathroom at last, gingerly toweling his head. He had put on a pink button-up t-shirt and Anne thought he looked like a handsome child, his cheeks splotched from the shower. He went to the window and asked about the floaters and Eliza said it was the same thing every summer, noisy river traffic, beer cans thrown straight into the water to wash up onshore alongside foamy dead fish. “You used to love to float the river,” Anne said. “That was then,” Eliza said.

Anne set plates of eggs on the table, repeating the word then to herself. They started to eat, the fiancée glancing out the window occasionally. Then. It was amazing how much derision Eliza could pack into one word. The fiancée, by contrast, seemed utterly benign, putting eggs into his mouth with a dumb and focused expression. Well, Anne thought, lots of men liked to be bossed around. Her own ex-husband had, before he hadn’t. But even Anne had never been as domineering as Eliza, never; when she was five Eliza had been discovered playing horsy with a neighbor boy, sitting on his back and whipping him repeatedly with a belt, crying giddyup! She had made him bleed.

Anne found herself relating this story to the breakfast table. The fiancée was laughing. He had bright, even teeth, of the braces generation. Anne laughed too, uncertainly. She’d meant it to be a funny story, hadn’t she? Though at the time she had not found it funny, not at all—at the time it was Eliza’s father who had laughed, and they’d had a fight about it. It was strange, Anne thought, how stories changed over time, how they picked up and shed meaning so you were never certain what it was that you were saying, yet there was nothing to do but keep on telling them.

There is a sound like crickets coming from my toilet. I wondered, at first, if maybe a family of them had nested in the pipes. But really what happened is there’s just something wrong.

In a different life I’d care except the house is foreclosed and I’ve been given thirty days notice to move out.

It’s the third time I’ve been evicted in the past two years. I keep moving into cheap houses—like maybe the crumbled falling-down look is just an act. It’s about money, though I’ve been thinking that maybe it’s not about money. I mean it could be a sign. My mother would say it’s clear that I want to be kicked out.

That’s why I don’t speak to my mother. She is always telling me what I want.

The house shows me that it’s desperate to succumb to itself, little pieces of it failing every day. Its water-damaged walls are soft as rotting gums and last night during the wind I heard shingles sliding off the roof, like a sore throat.

I wonder if my downstairs neighbors feel like I do; ashamed. But there are two of them and only one of me, though both my managers at work are under the impression that I have a three year-old daughter. They believe her name is Madeleine. What’s worse, I told them she has cystic fibrosis. I said she sleeps in an iron lung and every morning I have to pound her back with cupped hands, to help her spit the mucous up.

I only lied about the daughter part. Or at least the part where I’m the mother.

Lies don’t come easy to me, despite what you may think. I surprised myself with that one. But working at a liquor store, all I hear is tales of woe. There’s a man who’s missing both his eyes, and both his hands, and had a surgery to separate the bones of his arms so now he has two enormous fleshy pincers, which he uses to hold plastic flasks of Evan Williams. So I guess I felt unjustified in my unhappiness.

Now everyone asks about my daughter.

I say, “Every day’s a struggle, but she’s really hanging in there.”

At this point it’s a game; I answer like they’re asking about me. I tell them, “She’s pretty whiny when she doesn’t get exactly what she wants. But all in all, her attitude is good.” It’s an inside joke with myself. We laugh and laugh, me and me.

Except sometimes I wake up at night and feel I’m under dirty water. My lungs struggle to inflate. I wonder if an illness can be conjured like a spirit—if it’s separate from the housing body.

Or if a body isn’t like a house at all.

If it’s a stone: one heavy sinking thing.

Sometimes Jeremy gets angry. He doesn’t hit me ever, though once he slammed me hard against a wall and it rattled up my brain so everything went bright for a second, as if lighting had gone off. And it did feel like a storm. But then, I’ve always loved the rain—that same numb feeling when it ends.

Last night he lined up all our furniture out front and got his baseball bat swinging like a hatchet. He’s small but his body is strong from the yoga, and his muscles jumped under his skin in the yellow of the streetlamps. Things didn’t mean much to me just then, by which I mean the tangibles: the bookcase, the coffee table, the chip-painted chairs, all of it splintering off into the dark prickle of our dead front lawn; but the noise got to me after a while. The punch of the bat and the hopeless, choking sound of wood trying to keep together.

I woke up to find him staring at my face. He said, “Eliza, I wrecked all our shit. Why’d you let me do that?”

Then he kissed me.

But here’s a funny thing: when he put his mouth on mine, I had a perfect, vivid picture of a man I’d seen a while back. A young black man in Army clothes. He was crying on the bus, and talking to himself, saying, “I don’t know, I told you I don’t know,” and he looked so competent, so clean and sane, it scared me. To think the crazy all could be inside.
“It was probably a flashback,” Jeremy said later. “PTSD.”

I’d gone to find him at the yoga studio. I liked to watch him teach through the glass oval in the door—twelve women with their arms upstretched, serene expressions, Jeremy directing them: “Breathe in—breathe out—”, like they were one lung. Though Jeremy, I noticed, wasn’t breathing with them. Afterwards, he toweled off his sweaty hair and I turned on the studio’s computer, to look up what to do. In case I saw the crying man again.

“You have to get the person to the here and now,” I read. “You ask them to repeat your words. You give them peppermint to smell, or ice to touch: sharp sensations that will ground them.”

“It’s not a fairy tale,” I said. “The point is to remove them from a fantasy.”

“A flashback,” he corrected. “Not a fantasy.”

I had to think about the difference.

Emma Törzsis wrapping up her MFA at the University of Montana, where she teaches writing and serves as one of the art directors for CutBank. Her work has appeared or is forthcoming in publications such as Fringe Magazine, Pank, Joyland, Redivider, and the Cincinnati Review. She is currently at work on a novel.