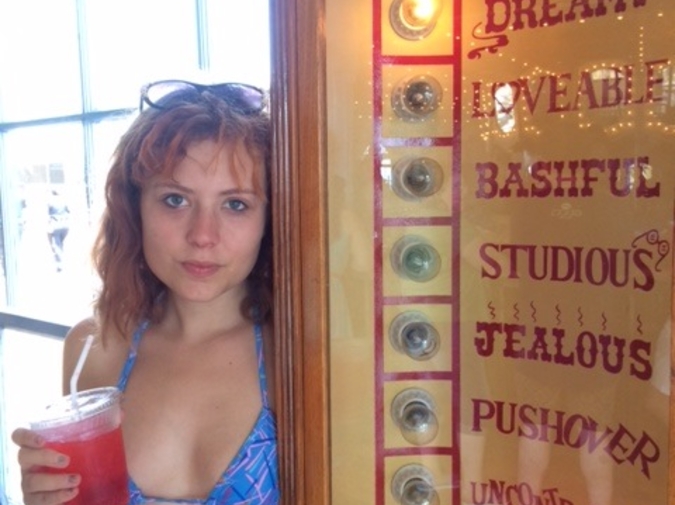 (you live in my blood you’re
a beautiful thing)

I am writing to you on a bus that’s in Hollywood.
The man beside me is snoring and behind us
two women speak quick Spanish and a few seats away
someone smells like shit
—more like shit
than I’ve ever smelled another person smell like shit. I am writing
to you
with my head turned to the side and my tongue stuck between my front teeth,
biting lightly the way I always have and the way you
treated my neck that morning on Melrose Avenue. I’m writing a letter to send to your house,
that I could just as simply bring to you. But I’m no pigeon. I’m writing on
a notepad from a Best Western in Arizona,
the one you drew a heart on the night before we saw the Grand Canyon. The night
we sat in a hot tub in our underwear and I put my foot on your leg,
and nothing could
handle us.

I asked you this morning,
“Did you really say that you felt close to me again last night
or did I dream that?”
You said,
“I said that,” and then made fruit smoothies.

If you were a VHS
I wouldn’t rewind you
for the next girl.

I went to a poetry reading and a guy I’d slept with once read a list of everything he’d done in Los Angeles and I wasn’t on it. I drank a Sapporo in the park and afterward listened to you cry about death in the bathroom of a diner. Later we lay in your bed in a hot room and ignored our few responsibilities.

I sat in a red-headed girl’s closet, our feet pressed together, chanting. We were 9 or 10. I had made up a very intricate language full of linguistic roots, and told her that we were princesses exiled to Earth from a distant planet, and this was our language. She moved away within the next year and when she came back I had to visit her in the hospital in the eating disorder wing, and we would play cards and try not to talk.

I had three friends in sixth grade and we called ourselves the Fearsome Foursome. We were drawn to each other due to a disdain for the other kids, which made them not like us, which made us hate them more. It was a cycle. Bianca was a dancer and Rachel took ballet classes but wasn’t as good as Bianca. Once Rachel kissed Gina in a swimming pool and Bianca said “LESBIANS” loudly. I was never allowed to sleep at their houses, which were in the mountains, which is where I grew up. We moved from the mountains because our neighbors started cooking meth. In seventh grade Bianca, Rachel, and Gina became friends with Brittany and Emily and Jessica and started to play truth-or-dare at lunch and make MySpace profiles and kiss boys at the movies. I stopped talking to them. I stopped talking to anyone. I don't know where they are now.

I would make small huts and cabins out of sticks and leaves and mud with my brother. For the fairies. We set them up on moss-covered rocks and waited. No fairies ever came, I don't think. He enlisted a decade later. He sends me photos of his boots.

I liked a boy in high school who played Tituba in a parody of The Crucible that my friend Lucas wrote. One day I invited the boy to hang out. He picked me up at the bakery on Freeport and 4th and we went to his house and smoked weed out of an apple. We started making out as his dog watched. I asked what he wanted to do and he said he wanted me to give him head, which I had never done, but my friend Chris had said that his girlfriend’s handjobs always hurt, because of friction, so I was afraid of touching this boy’s dick, so I just awkwardly moved it around with my tongue. He jacked off the rest of the way and we both watched a drop of cum ooze out. Later we listened to Bob Dylan’s Christmas album. He went down on me, naked, and told me I was “cute in a Megan Lent way.” Two weeks later he went to prom with a different girl. I’d see him in creative writing class and make a point of laughing.

I threw my favorite stuffed animal in anger on the ground of the parking lot, and I didn’t know why.

I walked with you down Sunset from Silverlake to Westwood in the middle of the night trying to get you not to hate me.

I’m watching a Kickstarter pledge amount go up exponentially
in my post-symbolist poetry class, trying to care about Wallace
Stevens and failing. Maybe I’m just stupid,
who knows. I’m realizing that there’s a whole
subconscious part of me that I’m not/cannot be aware
of. This is the part of me that hates you
when we’re cooking when I look at you meanly and you
ask what’s wrong and I tell you that
nothing is, let’s just cook this rice. I am replacing
alcohol with coffee, watching
billboards for beer and gin all over town and
watching my friends order whiskey sours
while I’m killing a Shirley Temple with no cherries. The
professor is now discussing vulgarity in Swedish
poetry, and I am considering texting you
about how your shaved face stings me
so sweetly
in my sleep.

I’m not allowed to be happy, I think. I’m afraid
of so many things—lotus seed pods, steep hills, rotting food,
maggots, the religious right, most men, computer viruses,
losing
you—
today I have $27 in my checking account and I need to buy
frozen vegetarian dinners and I need to apply for jobs
and I haven’t shaved my underarms or legs in
over a week, but when I look out the window
of the Humanities building
and see a soft tree sighing,
I know that I am ok.

Megan Lent writes short fiction, poetry, and nonfiction, and has been published online at sites including VICE, The Nervous Breakdown, Shabby Doll House, and Metazen, and in print in Lost in Thought, Illuminati Girl Gang, Big Lucks, Pop Serial, and Keep This Bag Away From Children. She is the author of the NAP ebook Patron Saints and the chapbook The End of the World, released by Dig That Book and Reality Hands. She is a student in Los Angeles.