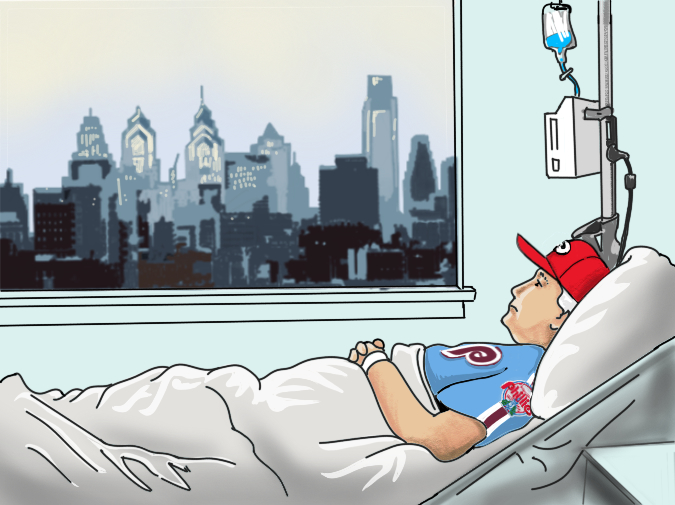 When I met the Phillies Manager
at a South Philly BBQ joint
I didn't tell him how I'd watch
the failing Phils lose day after day
as my mother fought in vain against
terminal cancer. I didn't tell him how we'd share
moments staring at a small TV screen
during early spring blowouts
in silence still clinging to hope.
I never mentioned to the skipper
how my mother died
during a game I had bought tickets
for, or how I turned the TV on
to watch the Phillies win
while her dead body still rested
in the living room
but didn't pay much attention
just wanting peace.
The kind of peace that only
death and baseball can bring.
I never told Gabe Kapler
how much the Phillies
mean to me, just said,
"I'm a big fan"
and left it at that.

When I Knew We Were Going to Lose

You can come back
whenever you want

were the last words
my mom ever texted me.

We were perched
on the sixth floor

of Our Lady of Lourdes
Hospital in Camden

and I waited too long
breathing sterile air.

The skyline of Philadelphia
shone through the window.

I stared at the bright glass and steel structures.
The buildings stood stoic, seemingly invincible.

Baseball played on the old tv
hanging from the ceiling.

We were losing bad. Down by seven
in the top of the ninth. I kept watching.

I waited too long in the lobby
in need of a reprieve from her dying.

and I look back on those words
and wonder when I can come back.

Sean Lynch is a Philly poet who serves alcohol to people in order to afford rent. His fourth chapbook, On Violence, was published by Radical Paper Press in 2019. He's the Managing Editor for Thirty West Publishing and hosts the Moonstone Poetry series at Fergie's Pub.