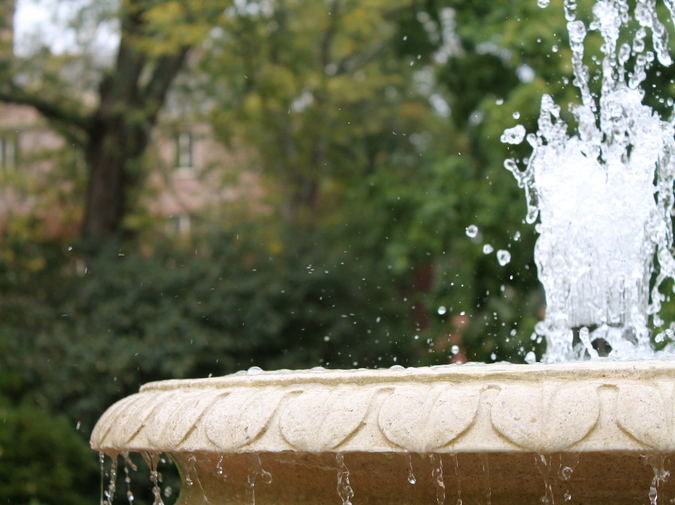 When I was twenty, Emily called me
from her dorm room. She wanted to know
if I believed in God, something about
trading an Iowa village population
three grand for a college town
bristling with fifty times that, all burning
in a way our Catholic grade school teachers
would surely condemn. I remember
talking it over in the stale reek of last
Saturday's beer bottles, a mattress so thin
you had to sleep on your side,
our hearts like stopwatches orbiting
the wrong planet. Then, somehow, sixteen
years left rust-rings on my bones
and I stopped speaking in second person,
weighed equally by the color of a woman's
jacket as she crosses the street or
the skittering of dry leaves before it snows.
And now, I am not so sure I'd weep blood
in a garden or sit fiercely cross-legged
until the universe reveals itself.
But I would still like to know
if the place I'm going has room service,
if there will be ducks in the elevator,
if someone I don't know left towels
folded in the shape of upside-
down houses, hung off a thin metal bar
that gleams like a blunted shortsword.

THE DHARMA OF THE LONELY GARDENER

I like that hydrangeas
will sometimes commit suicide
after you’ve cut them from the soil
and slid them in a vase
shaped like an elongated teardrop,
secreting sap that clogs
their green spindle of a throat
so that even in water, they die
just in time for the wedding,
though if you dip the stems
in boiling tap or freeze
or pepper them with needle marks,
thus infusing them with
a memory of pain greater
than scissors, they will riot
for days, waving like fists grown
fat as your baby’s heart.