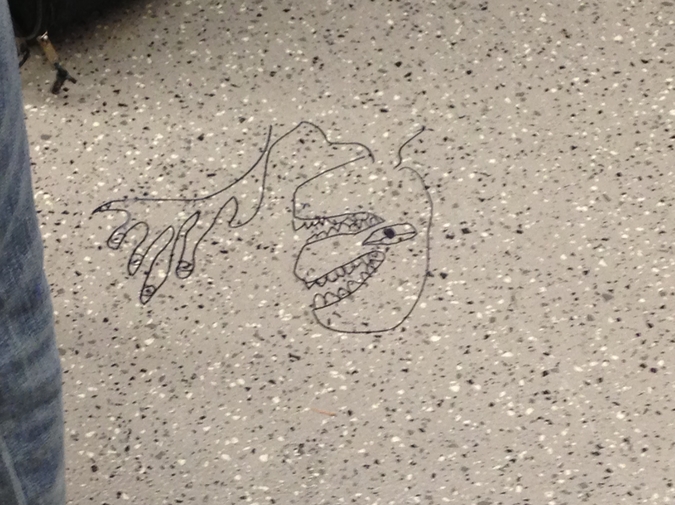 There’s grass growing on the dogshit next-door,
under the library mural of the Indian boy

with the salmon colored short-shorts
someone tagged “pardee panties”

the other night. It hangs out in the dirt patch
where we suck down our cigarettes

It’s been here through the changing of seasons-
we’ve watched it harden then freeze,

warm up and then grow, shock of green
straight up like a sort of dog turd chia pet,

like turdstroturf.  And some of us have been
fired, and one of us moved to Hawaii, but

that little piece of dog excrement is always
there, with its grass-leaf mohawk, the ultimate

recycler.  When they hire a new smoker, whoever’s
on break shows them the crap with something

like reverence, it’s kind of our experiment, even though
we try to seem uninvested.  We watch the dogs

in the neighborhood do their business with
this sort of disgusting hope, nobody looking directly

at the dog, even, we smile at the leash-holder,
the strollerful of baby, the cache of plastic bags.

Thirty one seemed so old when I was twenty,
sneaking into Max’s Tavern where you knew
all the bartenders and we nightly got shitty
on whatever beer was cheapest.  Back when
your need seemed romantic and I thought
your calluses might mean something
beyond history- the seventh-place 500-meter
hurdler in the nation for high-schoolers,
a junior Olympian. I saw you leap all the way
over the hood of some Honda in the parking lot
once on a bet. I saw you drink more whiskey than anyone
would ever believe and do a backflip off the second
story balcony to fuck up your left foot royally.
You were limping for weeks, lost the fifth job you’d had
since I met you- security guard, baker, aquarium salesman
Volkswagen mechanic, fishmonger (you were in love
with every one of them)- and still you wouldn’t see
a doctor.  My chest tightens now to look at you
in the picture at the river, your long man’s body tensed,
t-shirt rippling, your tribal-tattooed ankle, even then,
dated.  The stone you were skipping had not yet left
your hand.  I remember the smell of your Wolverine
muttonchops, the taste of your inner elbow
and Seagram’s 7, the hot, wet violence of your hands
in my hair.  And then I remember you dragging me
out of our room at The Palms Motel by the fistful of it,
after I’d dumped a gram of your coke in the carpet
followed by my glass of whiskey and still wouldn’t leave.
Old men with leather faces in bent fedoras just sat
smoking in the parking lot with neutral expressions
under the half-burnt-out neon.  I was not the first girl
to scream here. I crossed the dark tarmac towards the light
of a McDonald’s, bought you a McRib sandwich
and left it on the doorstep because you would not let me in.

Rebecca Bornstein is a displaced Oregonian and an MFA candidate at North Carolina State University.  You can find more of her work in Banango Street.