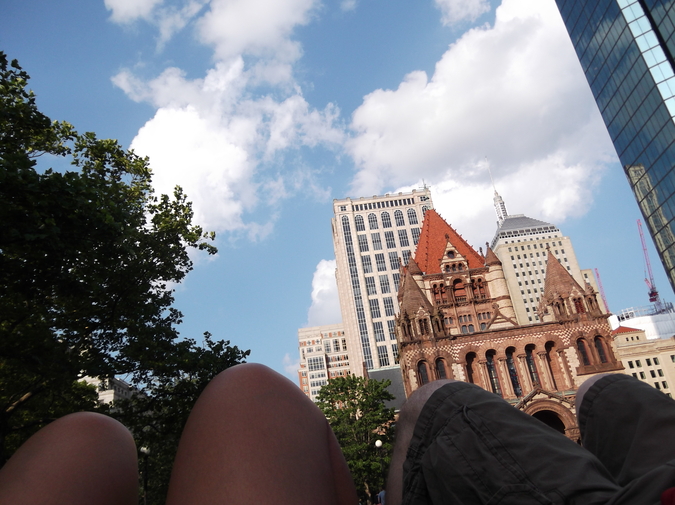 We'd stood in the rain to watch the fireworks, my girlfriend Linda and I, and it was perfect. It was Boston and it was the Fourth of July and even though it had poured buckets the whole time, everybody in the mob trying to get off the Esplanade was happy. Linda and I, we were happy.

The crowd wasn't moving. There were too many people, a crush of more than a hundred thousand trying to cross a handful of pedestrian bridges off the island. We were all shoulder to shoulder, belly to back, not going anywhere fast but not really caring because it had been a beautiful night and everybody was soaking wet.

Until a gang of girls, and then their boys, came crashing through. Pushing, shoving, like skinheads in a mosh pit, like the Patriots' offensive line. Somebody cursed at them and they laughed. Somebody else said, "Really?" and they cursed back.

And my happy mood clicked off, like that. I'd had enough. I stepped in front of one of them and blocked his way. He pushed. I didn't budge. He pushed again, I pushed back, and he shoved me over on top of the people next to us. And then he was in front of me, but he was stuck.

I shook my head. "See? Nowhere to go." Idiot, I thought. Asshole.

He wobbled, eyes wide and glassy, put his hand out and pushed my chest. He was drunk.

He dared me. His friends turned around. They were all big, athletic. They were all in their twenties and fearless. Nothing could hurt them. They'd never been scared in their lives. They hadn't lived long enough yet to know how much you had to lose.

The tall one said, "Is he gonna be a problem?" and the first one, the Steve Almond-looking one, said, "It's some fat guy. It's always the fucking fat guy."

I want to say that I shrunk into my shoes and disappeared, but when somebody throws "fat guy" at you, you don't shrink, you grow. You bloat. Your belly expands and your man-boobs stick out and your t-shirt tightens around where your belt doesn't fit right. You stand there with your backpack on, straps on both shoulders because it's more ergonomic that way, the backpack with the camera and the hats and the Red Sox swag you had taken your girlfriend to buy that afternoon.  You'd taken her to Fenway, taken selfies on the back side of the Green Monster, on that perfect day, that day you tried to show her all of Boston, the city of your birth, in a single afternoon.

And they do fireworks something beautiful up in Boston, more beautiful than anywhere, because in Boston they understand the Revolution. They invented the Revolution, I always used to say, and it was the Boston Revolution for the longest time, until the slave-owning wusses from Virginia finally figured out which way the wind was blowing and wanted to get in on the action because they wanted a seat at the table when it came time to decide, in legal terms, who was a man and who wasn't.

Which is what I was thinking at that moment in the crowd on the Esplanade. Who was a man and who wasn't. Because right then, despite my graying temples, I felt pretty much like a chubby eight-year-old, in my goofy shorts and my too-tight t-shirt and my stupid backpack with both straps pulled ergonomically-tight, while Steve Almond's drunk evil twin stood nose to nose with me, calling me "fat guy.”

He was waiting for me to throw the first punch, goading me, because then he would have an excuse, because he figured he could take a fat guy, an old man, and besides he had three friends behind him to help.

He didn't stare me down, and I didn't stare him down. Eventually I waved forward and said, "Just go." An aggressive move, because going ahead is what he wanted to do anyway but now I'd made it sound like I was telling him what to do.

But there really was nowhere to go. So I was stuck pressed up against him for another ten or fifteen minutes, while he talked to his friends about the fat guy behind him. They wondered what it was about fat guys, and how do guys get that fat, and they looked at the pond and wondered if the fat guy could swim and whether they should find out.

I thought about giving my phone and my wallet and my backpack to Linda, figuring if I was going to get wet at least I could keep everything I owned dry, but then I thought taking off my backpack would look like a threatening act, like a man rolling up his sleeves to fight. So I just stood there, being fat, while Linda locked her fingers in mine and squeezed my hand to let me know she was there and she understood.

Ordinarily I could have let the whole thing go. Just some drunk twenty-something assholes feeling feisty on a wet summer night.

But they had to throw the "fat guy" thing at me, over and over and over again, and I had to stand there and take it, stand there and be the fat guy while the crowd around us all looked the other way. They didn't want to get involved, because nobody wants to be in a fight on such a lovely evening, but I couldn't help feeling they all had to look away because they couldn't bear to watch the total humiliation of the fat guy. I felt like Ned Beatty standing there in his underwear in Deliverance, that look on his face, just the look, pleading that nobody tell anybody how he had been shamed.

I know Linda loves me just the way I am, but I met her forty pounds ago and sometimes I wonder.

My fiancée (who is now my ex) once told me during sex (literally during, like while we were in the act of fucking, while my penis was inside her) that my fatness wasn't attractive. I weighed 160 at the time. I married her anyway.

Trying to find some mention, somebody who saw it. Maybe the guy sobered up and felt bad, or maybe a bystander wanted to talk about what assholes they were, and about that poor fat guy who took all that abuse like a man, like a grownup.

But if you're a fat guy, Googling "fat guy" will not find you anything uplifting.

"If you want to know where to eat, ask a fat guy!"

And it goes downhill from there.

If you play the Google Suggestion Game starting with "fat guys are...", you get:

fat guys are not attractive

I don't remember a time when I wasn't embarrassed about my body.

Until I was twenty, I was ashamed of how skinny I was. My ribs poked through. One time in high school at a water park some kid pointed out that you could see my heart beating through my skin, and all the other kids gathered around to gape at how gross it was.

I was always afraid to take my shirt off in public, ashamed of my naked torso, because of how skinny I was, right up until the day I became ashamed of how fat I was.

I still don't know why there wasn't an in-between point where there was no shame at all.

At a wedding last year, I complimented a guy on how good he looked in his seersucker suit, and how I can never get nice clothes that fit right.

He said, "You're like me, we're the big guys, we're naturally kind of zaftig and so you need to have your shirt taken in here, and here, so that it doesn't balloon out."

I thought that was helpful, but really, I wanted to say, to scream, "I am NOT naturally like this!"

Because all he did was reinforce that people look at me and see a fat guy. To people who have only met me in the last five, ten, fifteen years, it's not just how I look to them, it's who I am. Because it's the only me they've ever known and how could a fat guy ever have been any other way?

But when I was sixteen, like I said, you could see my heart beat through my ribs.

When the crowd finally broke loose, Linda and I hung back and let Steve Almond’s doppelganger and his friends run on ahead. She rubbed my arm. She knew it hurt. We didn't talk much. She kept trying to tell me they were just frat boy Neanderthals, and I kept saying it’s OK, I’ve already forgotten it and she can quit talking about it. We made our way down to the subway.

No, what I remember most about the trip home was how much I had wanted to grab that guy by the hair and pound his face into the sidewalk until his skull came apart.

No, really, what I remember most about the trip home was how big my boobs felt in my shirt, and how everybody on the train could see them.

Ray Shea's writing has appeared in The Rumpus, Fourteen Hills, The Collapsar, Sundog Lit, and elsewhere. A native of Boston and New Orleans, he currently lives in Austin.