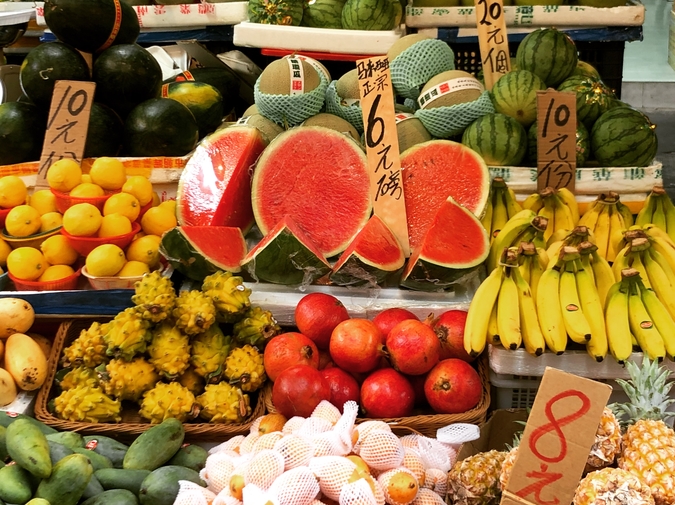 In the market, Rayanne arranges
breadfruit and guava on her stand.
She frames them with squat pumpkins
and green hooks of plantain. She
leans against her stool to stretch her
legs, finished with curation. She ties
up her braids and calls over to Cecile
selling vegetables two stands over.

Like many market women, Rayanne
says hands off the goods, but she makes
exceptions to this rule for the college
kids, the ones far from their homes in
Saint Lucia and Barbados. Rayanne
learns their names, asks about their studies.
She brings them over to touch the squash
and the June plums. In return, they tell her
the fruit words they use back home:
christophine, pomme-settiere. She laughs.

All of this happens far downtown,
around the corner from stray dogs with
short coats and long tongues. All of this
happens near the labyrinth of old crates
built by ghosts and drifters who are dead
asleep on the pavement. But this is

all that is left in the frame of a NatGeo
photo for an article about black poverty,
crime, death. Probably. Let them say death,
danger, dirt, rot. The longer they think this,
the longer Rayanne can protect her fresh
fruits and the sacred land that bears them.

In the 7th century, the astronomer Brahmagupta pauses
his sky cartography and considers some numbers. After,

he writes theories of debt, of wealth, and of something new.
He calls it zero and is the first to arrive at this idea since zero

is not often a feature of this world with its excess and bounty
and surplus. Zero was not apparent to the Greeks or the Romans

with their little nude boys, bronze bulls, and virgin brides. All
these amounts of things and time. But because of Brahmagupta,

I can imagine a system of time that starts with the year zero,
a system that isn’t punctuated with hot war or conquest, I can imagine

a way to name this planet and its people in several places, with
several beginnings, but mostly without that baby god god baby

that zealots love to misquote. Everyone knows the baby god’s
name as well as the white man they keep him inside, you know the one,

that hunky Anglo wet dream: blue eyes, bloody body, muscled and raw.
Even today, centuries later, it is still the year of their lord. They have

kept their monopoly on time and peddled that white homunculus
to every corner of the globe. Let him stand aside as I look for my

people, my ancestors, and our contributions to the world. I am no
child of Brahmagupta, but I see past painted idols and glass kings.