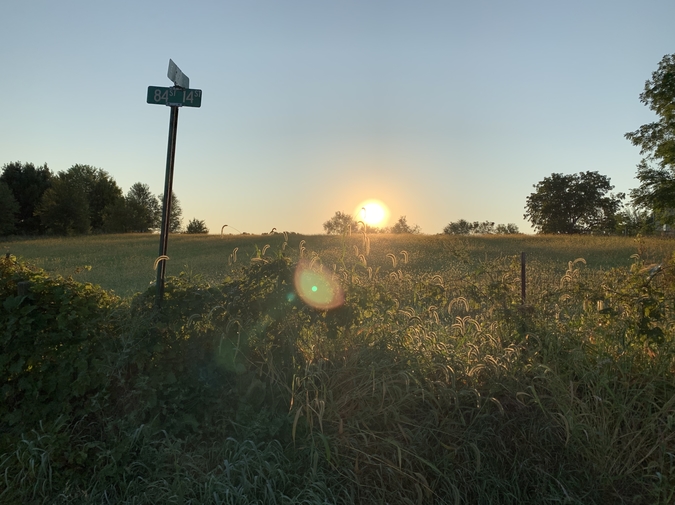 We bruised
my knees on the bluff.

I’ve disappeared into the current
of loving nothing
but tainted water lapping against rotten fish
against a rocky stream below the dam
of loving something so dirty.
If you get stuck -- that current
it’s purgatory.

I hate days with no clouds, a blue sky.
I can never look at the reflection
without floaters in my eyes.
But god it’s so pretty as the sun goes down.
Those cotton candy skies that don’t dissolve
in water before 7pm in the summer
remind me that it doesn’t smell
from the bluff as it does down at the docks.

When there was no Walmart, just neighborhood grocery stores. You would go around the corner from South 19th to buy your mom another pack of cigarettes but this time menthol because her throat was sore. When you could go into Keasling’s Pharmacy and reach your dirty fingers into the jar of jelly beans and grab as many precious beans as you could before the owner rattled her keys against the metal handle of her shopping cart she pushed around the store -- she couldn’t walk without it -- and yelled at you to pay for the candy or leave. During the days everyone did their shopping downtown. In the evenings everyone did their drinking downtown cruised up and down main street in their ‘74 Chevy Nova almost positively doing both at the same time downtown. Went a block off of downtown to go to the Palace and dance to the “Electric Slide”and piss on the shag carpets that covered the bar floor. During the work week you could get a bowl of chili with extra grease at 709 Main at the Grand Lunch. You sold shoes downtown, modeled for Vogue downtown, got off work and went to the casino above the bar downtown, took your wife to a movie downtown, made your kid pick your husband up from the bar downtown, forced your kid to stay for one more drink downtown, ended up walking home from downtown -- going back downtown again Saturday -- waking up for church on Sunday  --going downtown for work again on Monday. Now you sit in a coffee shop downtown at 709 Main in 2020 and drink your coffee, your smoothie, your bubble tea -- no grease with extra chili -- a man sitting in the corner writing, two girls ordering caramel brûlée lattes at the counter talking about the football game that night and how Jake might ask the blonde girl to homecoming in the same high school you went to games and asked girls -- got asked by boys -- to homecoming.

Madalyn Whitaker is a graduate of the University of Iowa where she studied creative writing, English, and publishing. She's currently living in Chicago with her cat, Harold, and working in PR. Her work has previously been published in Fools Magazine and Zeniada Magazine.