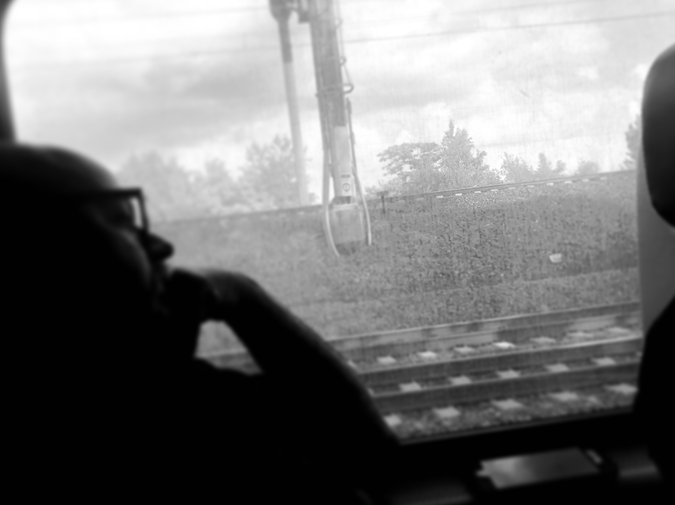 On a sunny afternoon in May 2006, I had skipped baseball practice to try psychedelic mushrooms for the first time; but when I got home to pick up the mushrooms from the basement refrigerator, I found my dad violently sobbing at the kitchen table. My first thought was that someone had died, maybe Mom, and I started to get the weak quivery knees and fluttery heartbeat of someone on the verge of tears. When I asked him what happened, he slid over a handwritten letter.

The letter was from a woman named Janice, she opened it by saying: If this is Sal Farriella of New Brunswick, New Jersey who in 1976 struck and killed Cynthia Dixon with their car, please read on.I read on. I used to hate you.

His head was in his hands, sobbing.

“She just came into the road,” he said. “ Out of nowhere. I was on my way to the convenience store to get some mixers and cigarettes. Your mother had some friends over, it was around dusk.”

“And you hit someone? Cynthia Dixon?”

“She was just a little girl. Six years old, I think. Just popped off the curb on her bike. I couldn’t stop. I was 17.”

I told him that I was sorry and that I hadn’t known that happened to him.

“There were 5 witnesses, each said the same thing. Freak accident.”

I wanted to sue you.

Later, my friend Sean and I agreed that instead of meeting up, we would eat the mushrooms on peanut butter sandwiches and instant message each other on AIM to document what we were feeling. It went something like this:

my dad killed a little girl and i had no idea

no
not yet
i dont think
but i feel warm

what about ur dad?

i found him crying
when i got home

When the mushrooms hit, I felt like my body weighed a thousand pounds. I sat on the floor and left AIM up on my computer with an away message that said, “I am away from my body right now.” I could hear my mom talking in the living room. I turned on the TV to a channel we didn’t get. I couldn’t believe that my dad could keep something like that inside for so long, and tried to image what that was like, carrying that around. Maybe that is why I felt so heavy.

Two years before then, when I was 14, we buried my cousin who had overdosed on heroin. I remember crying and crying, and one point, crying only because I felt like that was what I had to be doing. Even though, the weather was nice that day, the day prior my tournament team just won States, and I honestly felt bored about the whole funeral thing. I cried to show my family that I understood what death was and how to take it, head down in tears. I don’t remember my dad crying at all that day, because he was consoling me. Strange how witnessing a moment of weakness in him, I could see how strong he was, or has been. As I stared into the TV, I let the snow of the static swirl all around and consume me, thinking of my dad as someone who could swallow death like a pill, and let it dissolve until it burned his stomach, showing no signs of discomfort, the way men were supposed to, I guess.

The truck was filled with mulch; it stunk like shit. 96 degrees at 8 a.m. and climbing. August sun. My dad had made me help him fill the garden boxes and plant beds at the front of the house. It was 2014, a year after his brother’s suicide.

My job was to fill a wheelbarrow with mulch and run it over to wherever he was so he could spread it evenly. I told him we could switch, that he being on his knees would be hard on his back, but he said to just keep bringing him loads. He didn’t trust me with doing the most import roles of any job. We started having these broken up conversations while I was unloading the mulch and he started spreading. Usually we could only get one sentence in before the wheelbarrow was empty and I’d have to go back to the truck for a refill.

You see the game?

I’d come back with another load.

They have no pitching, I tell you.

I’d go and come back.

You see that guy on the news? Guy from Piscatway. Ex-chief of police.

The suicide by cop?

The barrow remained empty. He stood up, squinted into the sun.

Yeah. Fucked up. Had his wife and kids in the house as pretend hostages.

Why does anybody do it?

I went to get another load.

While I was dragging clumps of mulch into the wheelbarrow with a pitchfork, I thought of my uncle’s life and tried to map out things that made sense for why he took his own life. He was broke. Alcoholic. Pancreatic cancer spreading into the stomach, liver, and kidneys. But these points weren’t so obvious; they didn’t really add up to a definite suicide. If I looked closer, I found less relevant things about him that could have contributed: Depression. Divorced. On the verge of going back to jail. And if I looked closer than that, I still found things orbiting there around him that could be factors: Lost mom at 12 years old. Rage issues. Possible bipolar/obsessive compulsive disorder. I figured that’s what suicide was, a culmination of an infinite number of traumas, piled together like grains of mulch until it all got so heavy, you could no longer break it up, compartmentalize it load by load, and move it to somewhere else to spread it out where it all felt real thin, and things like flowers could still peak through and not be suffocated by it; trauma was suffocation.

From the stereo speakers hanging outside of my dad’s woodshed, I heard the opening chords to “Simple Man,” by Lynyrd Skynyrd. I filled the wheelbarrow to the top and rolled it across the lawn to where my dad was, hunched behind a bush of Azaleas. He was sniffling.

He walked up to me and hugged me.

I miss him too.

Winter, 2016. It snowed the whole time we were on the road. We almost crashed, twice. My dad was driving frantically, wild with impatience. My mom kept checking her phone in the front seat. The energy in the car felt like there was heavy metal blasting, but the radio was off. I was distracted, having just broken up with my girlfriend, and was looking forward to getting to Long Island to forget about having been cheated on, at least for the night.

My sister was in the Mother’s & Babies Unit of Good Samaritan Hospital, having complications with the birth of her daughter. The baby’s neck was being squeezed by the umbilical cord; she wasn’t due for another two and a half weeks. The cord was wrapped around her neck four times.

My mom had gotten a text from my brother in-law saying that Anne was being rushed into surgery and that we should come up as soon as possible. So we threw ourselves into the car; my dad in his Giants pajama pants, my mom with a skin healing facemask still on, and me half asleep from working a double shift at the warehouse that morning. It was Christmas Eve, too.

We sat in bumper to bumper traffic on the Belt Parkway. My dad slammed his fists on the steering wheel, my mom chain smoked with the window all the way down. The cold air found its way into the backseat and woke me up a little bit. I tried distracting myself by looking out the window, watching what else was happening in the world. My eyes followed people as they crossed the busy Queens’ streets carrying grocery bags and walking fast; probably on their way to their big, warm family gatherings. People hung around outside of convenience stores with their hands over their mouths blowing smoke. Stereos played loud Christmas music. Cars honked idly, for no good reason. In every person I saw, I pictured their lives being better than mine, even though I knew that wasn’t possible. Each of those people had or will experience loss, but I envied them for not being right in the middle of the uncertainty of it. I thought about what if my sister was losing the baby or worse, what if she was dying and looked to my parents for answers in their faces. All I saw was fear. But as the traffic picked up and soon after the lights of the city were blurring past me, I only saw focus; they were determined that everything would be okay.

We got to the hospital just as my sister was out of surgery. She and the baby were fine. My dad let heavy single tears drop one after the other from his right eye. I liked to imagine that each was filled with grief, worry, stress, fear, and trauma; and that after he wept, he would be relieved of it all. My niece was born at 5 lb. She smelled like mozzarella cheese. In the recovery room, we laughed about that until we cried together, as a family. When I looked over at my dad as he hunched over my sister holding the baby, I could have sworn that he looked freed of some weight, like he was floating up towards the ceiling.

Nick Farriella is currently living and surviving in New Jersey. His fiction has appeared in Barrelhouse, X-R-A-Y, Maudlin House, and elsewhere. He's on Twitter @nick_farriella and wants to thank you for reading his work.