The Wizard of Me 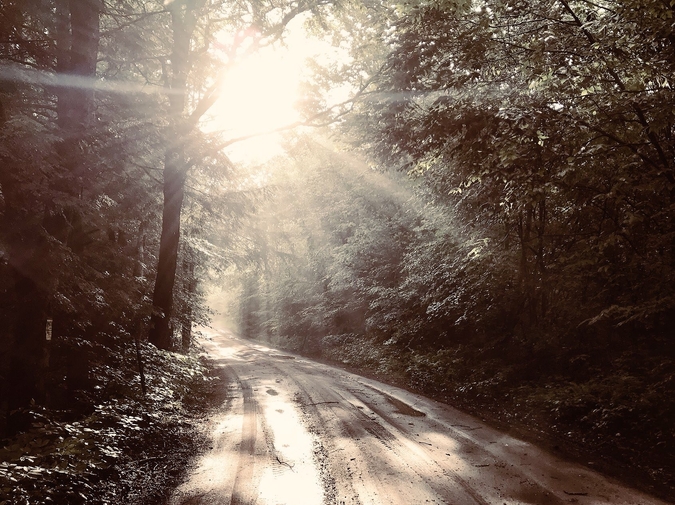 My father, or sometimes my mother, waved the newspaper’s TV listings at me once a year and announced, Guess what’s on tomorrow night! I saw the wink, the smile; then felt the rainbow burst from my heart. Yes! I yelled and ran to the bathroom mirror to braid my hair like Dorothy Gale’s.

I never knew when to expect the annual airing of The Wizard of Oz—it should have been pinned to the calendar like a holiday. I celebrated the evening with a bowl of popcorn and my nose to the television, and then for the next few months at recess I reenacted the scenes with my friends. Our favorite was Dorothy’s long, terrified walk to the throne room inside the Royal Palace of Oz, whose arched hallway we approximated—in miniature—by using the school’s bicycle parking rack that never held any bikes. The bars formed an open triangular tunnel that was perfect for squatting at one end and being scared, if you were Dorothy, or at the other end and being scary, if you were the Wizard—or rather, his smoking, flaming pyrotechnic version. Sometimes we got classroom chalk to draw the fireballs on the sidewalk.

We didn’t assign roles. We collectively inhabited all of the characters. It was the 1980s and we were perfectly capable of ostracizing and bullying, but we saved our meanness for other games. In playing Oz, we had no hierarchical system of who was Dorothy and who was a flying monkey. We were in it for the deliciousness of the most frightening plot points, like Dorothy falling into the pig pen at the Kansas farm. And Miss Gulch’s penchant for dog-snatching. And the coming cyclone. And then, in technicolor, the Land of Oz’s angry apple tree. The Wicked Witch of the West’s crystal ball and her hourglass that trickled away Dorothy’s life. The deep, threatening chant of the soldiers who marched at the Witch’s castle. The Witch’s death, which was so unsettlingly water soluble. And the Wizard’s projections of autocratic judgment and disapproval, all on one enormous, floating, bloodlessly green head, yelling Silence! and Come forward! and Now go! The characters mattered less than the story.

And the story was complicated. It was worth reenacting to chew on whether it ended well—I was bothered by the Wizard leaving Dorothy behind as he sailed away in his hot-air balloon, and Dorothy realizing it was all a dream solved nothing. I felt like she’d been woken prematurely and forced to conclude a moralistic lesson that made no sense—I mean, there are plenty of places better than home—because she was deprived of her chance to figure it out. Her thoughts would have been different if she’d watched the Wizard disappear into the sky and then obsessed for a week about what the hell she was going to do next instead of waking up a minute later, off the hook with one glib conclusion.

But I was a child—I knew all about quick, throwaway answers. I gave them out in every class.

I watched the movie for everything else.

Ten years later in the 1990s, I sat in the basement of my Pennsylvania college dormitory with a beer in one hand and my English assignment in the other, leaning close to Jerry and Jerry’s (accidental roommates—it was funny then too) television while Jerry said, Wait for it… wait for it… There! There it is! And a heavy sack of suicidal actor who played a Munchkin fell from a distantly background tree, swinging from a rope. I hadn’t seen The Wizard of Oz since elementary school and now I was watching it on repeat.

But I didn’t believe in the throwaway answer. I would not be glib. In college, writing had become an act of alchemy and I was the experimenting chemist, transforming metallurgy of the literary canon into something gold: insight. Writing a paper distilled understanding, and the distillation yielded purity of a new conclusion. Gone was the five-paragraph essay that ends in the same place it begins—kind of like the yellow brick road that leads nowhere but back home. My papers did not end where they started. My heart’s desire was not in my own back yard, and I’m pretty sure Dorothy’s wasn’t either. Because if it isn’t there, I never really lost it to begin with, she lies prettily, buying herself another year of childhood, back in favor with her family.

A journey has to mean a destination. A narrative arc lands somewhere, over the rainbow or no. I had to be heading somewhere.

Outside of the Jerrys’ circle, I made two friends who’d just arrived on campus, one an exchange student from Moscow and one a freshman from Virginia. Their names were Lev and Dov, which meant lion and bear in Russian and Hebrew, respectively. Lions and tigers and bears, oh my—when the three of us were together I wondered if I should be the tiger. But I did not feel tigerish by any metaphor. I was not sleek. I was not glamorous. I was not languid. I was not sexy. Nothing about me qualified as striped: not my plain hair, not my nonexistent makeup. But Lev was a lion, large and sunny, with a savanna-colored mane and a friendly heavy-footed lope; and Dov was a bear, burly and dark and anti-social, who growled when he spoke and had big hands that looked like paws.

Lev loved me. I loved Dov. Dov didn’t love anyone.

But we hung out a lot so I tried to be the tiger—just in my mind, of course. I wanted to be the logical completion of the trio. I couldn’t be afraid of an allegorical forest if I were a wild animal endemic to it, especially when I was steadily flanked by two of my kind. In all my games of Oz at recess as a kid, no one thought to be the wild animals—probably because they aren’t in the movie. They’re imagined. They’re a whimsical threat that never materializes. As Dorothy, the Scarecrow, and the Tin Man start to panic about the possibility of lions and tigers and bears, oh my, it’s the Cowardly Lion they meet, who is as far from a wild animal as Dorothy is—he’s a proxy for a human. As wild animals go, Toto is closer.

How odd, I thought, that the first time I wanted to be a specific character from The Wizard of Oz, it was one that did not exist. As much as I’d identified with Dorothy, I’d never inhabited her. I’d never dressed up as her for Halloween. I’d loved braiding my hair, but I never owned a pair of ruby slippers. I couldn’t sing a note of “Somewhere Over the Rainbow.” I couldn’t coordinate my feet to skip down my sidewalk—the footwork she does is called a pas de basque, with a coupé and chassé temps leve for some flair, and it wasn’t happening.

But neither was I a tiger. I settled for the satisfaction of claiming Lev and Dov as allies and internalized a tertiary bravery. I felt invulnerable, untouchable, as I walked the campus footpaths—quite staidly, with no pas de basqueing or chasséing—because a lion and a bear had my back. I was safe, if mostly because of my fantasy. But fantasies inform reality: I brushed off fraternity bros and clusters of sorority girls, disinterested in their narratives, shunning their dialogue. I wasn’t in their stories. I aligned myself with off-screen characters—the strong and scary ones—who’d shrugged and declined to leap into the camera’s frame when they were summoned as villains. In college terms, it meant they hung out at the computer lab instead of keg parties. It meant they never touched me when they walked me home. I was decidedly off-screen too, spending weeks in the library, working on writing something gold.

Now it’s 25 years later and I invoke that inviolability every time I opt out of a plotline—like whose fault the divorce was. Or whether the affair was justified. Or if the kids’ neuroses exist because of me. Or why my aging parents seem to prefer my sister. I reject a narrative that would explain these endings; while you’re living the plot points, there’s no story. There’s no arc. I can selectively ignore or highlight scenes to fit any story I want to tell myself, but in reality, shit just happens. My daughter is an addict and my son won’t go to school—what developmental cyclone swept me up in this, and who can explain to me where I just landed? I don’t understand my landscape, but I won’t impose an artificial story—I might make the mistake of considering myself the villain, or worse: being the heroine.

I think of the wild animals in The Wizard of Oz, who are neither heroes nor villains, hanging out backstage where sandbags stabilize the scenery. Maybe they grab a smoke with the Munchkin actor who isn’t suicidal after all. Maybe they sit in the alley outside the stage door, playing cards on a crate, scratching their fur and nodding to the busy cast members without looking up from their game. It’s not their story.

I’d chassé myself out too. And I do.

Lev, Dov, and I haven’t been together since we graduated, but we’re connected on social media. So are both Jerrys and a couple of my old recess friends, but it’s Lev and Dov I talk to the most. Lev, typing from Moscow, has buzzed his mane off but gained an affectionately wrinkled leonine forehead; he says he still loves me, but he’s a flirt and I know he’s just playing. Dov lives in rural Virginia and almost literally hibernates from society. I love him more than ever, but bears live alone. I’m no more a tiger now than I was then, though I officially have stripes—I’m going grey, in streaks. And of course there are stretch marks.

I don’t know what my story is. I know only that I won’t end up where I started.

There is a clarity now, like going from the windy chaotic colorlessness of the inside of a cyclone, where you simply hang on tight and pray that you’re going to land, to the thud of the landing itself—definitive, leaving a brutal dent, and so squarely grounded that you killed whomever you landed on—in a world that’s nonetheless impossibly colorful and sometimes so beautiful that it hurts your eyes to look.

Oz’s vibrancy had a price. When The Wizard of Oz was filmed in the late 1930s, the technicolor process required intense studio lighting—the actors reported vision damage for years afterwards. It hurt their eyes to look, too.

Maybe that’s the tradeoff in a journey towards something wonderful.

Joanna Franklin Bell is a writer and teacher living outside of Baltimore, MD. She earned her MFA from Goucher College in creative nonfiction. Her work has appeared in STORGY, Baltimore Magazine, Scary Mommy, Motherwell, Elephant Journal, and P.S. I Love You.