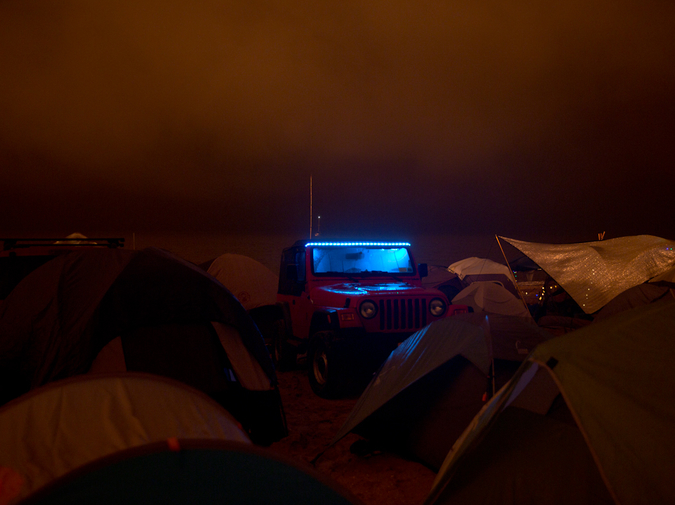 Smoke rolled in from a fire to the east, a thick plume that came over the mountains like glue running down a large knuckle. It smelled sooty outside the Pilates studio I liked most, the one right in the middle of my commute home. The air was just on the inside of La Concha, a small town surrounded on three sides by hills, one side by road and sea.

Rudy was the best instructor there. You could tell by the way he grasped the carriage and the gear bar. I went out and bought everything I needed after our first session together—leggings, gripper socks. I thought that could be it: the good stuff, the things that would correct my posture, and tilt the ship right. At the end of the day none of it really mattered. In the beginning, my arms and legs could barely withstand the rigor of the class.

Ring out your torso like a washcloth, Rudy would say. If it hurts, let it hurt.

My leggings grew worn. My bra’s elastic blistered when I touched it, stretched beyond recognition. I waited until I was the one Rudy had known longest, the body he understood best.

One hip there, move your ankle to the left. Draw in your midline.

His adjustments felt like a new language—intimate, professional. After a few months with him, I even considered taking German. I looked at classes online but decided to settle for Rudy’s teachings. When the weather got bad, I would attend three, sometimes four classes a day.

Bad weather wasn’t an uncommon occurrence. La Concha made national news just twice, both times for landslides that sunk houses in mud up to their chimneys. There were usually signs: wind strong enough to knock down telephone poles. I was ten the first time, twenty the second. Our duplex on Santa Paula made it through by sheer luck, though we lost the Volvo and the dog.

I called a spade a spade and went into claims adjustment. It’s better to be prepared. Everyone in the Tuesday workout did something similar. Car insurance, homeowner’s protection. It was how we lived out here. We knew what whiplash was and what it definitely wasn’t.

There was a bench outside the studio that I liked, a cold stone slab in the glow of the intersection. A bus used to go around the neighborhood, but then the route moved. It was so dark you could barely see the cracks in the sidewalk. Most cars just took the freeway to avoid the town altogether. That night my body sweat against the bench more than usual. It left a thin stain around my perimeter.

Rudy found me when I was still dripping.

Were it not for his posture I don’t think I would have registered his presence at all. He didn’t rely on the bench to keep his body upright. He didn’t cross his legs. The ability to maintain oneself outside the studio was the sign of a true master.

I looked up at Rudy, his back hitting the air like a ruler.

The mind is an act of balance, he said, looking at me. It is a lever for the body.

It was something he had said before, usually during the Wednesday class. I admired him for cutting out the small talk.

I told him that when Joseph Pilates was interned in England during World War I, he taught wrestling and physical fitness to all the other German nationals. His practice was perfect for inmates because you don’t need space or special equipment. Except the reformer, of course, but that was not developed until much later. Even when the prisoners’ towns got destroyed by the French, it didn’t matter, because they were in the best health of their lives.

He had a careful tone, one that mimicked the way his fingers nudged open the insides of my knees during class.

I want to give you something, he said, standing up easily.

I don’t talk to strangers and I don’t get in their cars with them. But Rudy and I shared so many hours together—paid, of course—that it felt natural. Seeing him lodged into the Volkswagen’s front seat, feet upright on the pedals. He moved the left one easily, on and off the clutch.

I looked out the window. We were just outside of La Concha, where the train used to stop through. I could see ash floating in the stoplights.

The smell of eucalyptus came in through the window as we went up the road that snaked through the pass on the north side of town. We were above the smoke. This was where the new people lived, post-landslide, post-fire code. Post-post-post. It was nice. It felt as though a body of water were just past the next ridge.

His house must belong to one of these islands, I thought. Its asphalt wet with a gardener’s gasoline.

This is it, he said.

Inside it smelled like WD-40 and candles. There was furniture that seemed to stretch toward the sky. The walls were nearly bare. The only thing I could see was above the dining room table: a small wooden shelf unit, divided into a series of boxes. One cube held a model submarine mounted on a plywood board, its shape close to that of a U-boat or a torpedo. A tightly folded stack of white napkins lay in the square to the model’s left.

He looked at it.

I found it at a yard sale in Santa Susana, he went on. Most people don’t know the value of a good thing when they get it.

I nodded to signal my approval.

You don’t like it here, he said. You are uncomfortable.

Au contraire, I said. I’m very jealous of you. You know exactly what to buy.

My worst quality, he said. I just seem to have the sense for it.

He touched the chair as he kept talking. It struck me that he loved it.

Sometimes, he said, when children are put on IVs, even if the initial illness is cured, they can’t survive off the IV. Their bodies prefer it over anything else.

Joseph Pilates didn’t call it the reformer, he said. He called it apparatus. One word, no article. Of course, we don’t need anything but the mat. But apparatus work is known for its rehabilitative qualities. I’ve become quite dependent on it.

He laughed to himself.

Sure, I said. For rehabilitation.

For everything, he said. Understand?

Then Rudy led me through the one-story house to a back room that faced the bigger city up the coast, away from the narrow road we took there.

Come in here, he said.

He opened the door to what I assumed was a bedroom. There was a floor-to-ceiling window and heavy brown curtains. I thought that it was brave of him to have windows like that up here.

Flat glass panes are often the first to break under exterior pressure, I said.

I’m not too worried about that, he said.

Then I saw the fish tank. The room was empty other than that. The tank was small and glass, the type they have in the Thai restaurant in Cerro Gordo.

This is my favorite possession, he said, gesturing at the tank. I won it at auction for half of its appraised value.

As I walked across the room I saw that it wasn’t empty. There was a substance inside it that looked like Kool-Aid, a clear-blue kind they don’t sell in stores. Suspended in the middle was an elongated beige oval, not more than four inches end to end.

I looked closer, bending my knees until I stood level with the tank. The floating object had wrinkles lacing its flesh, knuckle protruding from bone. A yellow fingernail hung from one end like a flag. The substance must have been a preservative, and a good one. I could see, squinting, the faint indentation of a gold band.

I squatted on the carpet. There was nothing else in the room, just the small nightstand that held the finger and the tank.

Tell me what you want, he said.

You can have an ear lobe or a pinky finger, he said. That was all they had online. I find that knowing he’s there helps me. You might discover something similar.

He rustled around in a small closet on the far side of the room. He brought out an identical tank. The pinky was smaller than the ring finger but had the same detached, floating cuticle. The liquid was not viscous like I had thought, but entirely solid. It was very sturdy for a tank.

Formaldehyde and Jell-O, he said. A secret recipe.

I could see it already, the finger, placed up on the windowsill or nestled in the back of my car.

The fingers are at the heart of Pilates, he said. Everything we do on the reformer needs them. Their positioning determines the wellbeing of the rest of your body, of what you’ll get out of the practice.

You’ve preserved it beautifully, I said. I can’t thank you enough.

I didn’t know it was possible to preserve something that well.

It turns out the mountain isn’t so steep after all. It can be walked in just a few hours. I clutched the tank against me as I got down the pass. Through the smoke I could see oil derricks in the ocean and cars on the freeway. I never noticed how many people went by without incident. People visiting their brothers and sisters or going to restaurants. I watched the finger bounce with my step, its nail flicking back and forth in an imaginary wind.

Claudia Ross' writing has appeared in The Baffler, Litro, GARAGE, X-TRA Contemporary Art Quarterly, and LA Review of Books, among others. She is an MFA candidate in Creative Writing at University of California, Davis.