The Night I Could Have Met the Real Matt Damon 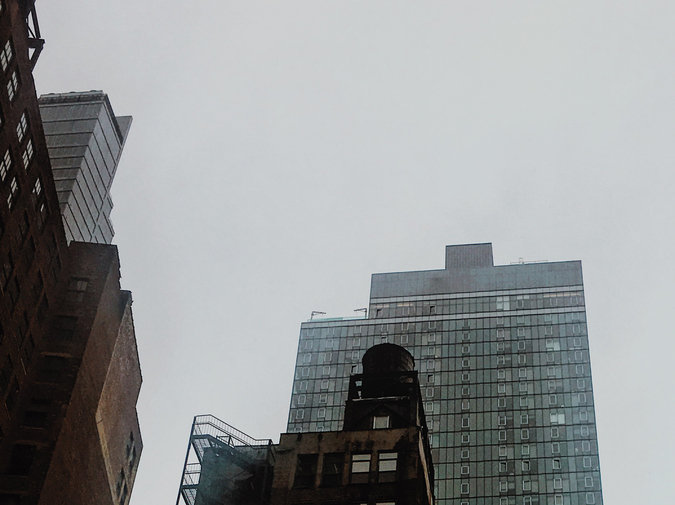 Our waitress bustles around smiling a strangely huge smile for this boring work night. My boyfriend Nick and I don’t follow football and weren’t invited to any parties, and since most Texans are either holding or attending parties the place is pretty deserted. After the waitress brings our waters she follows her normal script and asks if we want to try a signature TGI Fridays drink, but her eyes keep dancing to the bar behind us. Nick and I look at each other, wondering if she’s high on weed or just in the weeds. We’re servers ourselves and can tell something’s up. Then her eyes focus on us for the first time and she seems to make a decision. Maybe we look trustworthy. She kneels onto the crumb-speckled carpet, and as her blonde head enters our booth space she says, “Hey, I’m not supposed to tell anyone, but Matt Damon is at the bar right now.”

Nick and I live in Kerrville, Texas, a retirement town nestled in the Hill Country. The town boasts beautiful views and a toasty climate. The job market is pretty bad, but retired folks don’t need jobs. Strangely, Kerrville is also a college town, home to Schreiner University. The extremes lead to road rage—the young aggressively blast music while inching up on the bumpers of the elderly, who clutch the wheel and drive 15 miles under the limit, bifocals determinedly focusing straight ahead, ignoring everything but the road directly in front of them.

I gape at the waitress, who wears a proud and amazed smile. “The real Matt Damon?” I demand. The waitress assures me that the actual Matt Damon is indeed sitting on a bar stool right there, drinking an Amstel Light and watching the Super Bowl. Nick and I sit at a booth. A wall blocks our view of the bar. Moving like synchronized swimmers, we cautiously raise our bodies until we crouch, knees on the booth seat, peering over our blockade at the supposedly authentic Matt Damon.

Nick and I are Schreiner students, taking two classes each semester in the night/weekend program. We’re poor, and Pell Grants don’t cover Schreiner tuition, especially since we don’t have the time to take 12 credits a semester. We wait tables at Chili’s, working alongside the real Schreiner students, many working for cash they spend at a bar after their shift.

I squint at the guy at the bar. I can see the back of his head and part of his profile, which I compare to my mental picture of Matt Damon in Good Will Hunting. Matt Damon is hot shit right now—GWH came out two years ago to high acclaim. This guy looks like a normal guy—t-shirt, jeans, and sneakers, baseball cap slung low, drinking a beer and watching the game. When the waitress comes back with our signature drinks, I pounce on her. How does she know he’s Matt Damon? Has she spoken to him? Why is he here and why alone? The waitress says someone—she isn’t sure who—called her manager, informing him that Matt Damon was coming, and asking that Matt Damon be left alone to enjoy himself. He’s in town filming something and wanted to watch this game in a bar atmosphere. The waitress has not spoken to the guy at the bar, but made up a reason to walk by him, and she assures us it is undoubtedly Matt Damon.. TGI Friday’s seems like an inferior bar for watching a football game, but maybe a chain restaurant is safer than a neighborhood bar if you’re the bona fide Matt Damon. Nick and I look around at all the servers, who seem dazed and freaked out; we decide that it must indeed be Legitimate Matt Damon at the bar. The customers sitting around us have evidently not been clued in, as none of them are peeking at the bar area or doing anything other than eating their dinners. We’re grateful that our waitress has included us in the secret of Matt Damon.

Kerrville has boring small-town restaurants. Mr. Gatti’s, Denny’s, McDonald’s. The only good place is Chili’s, and we don’t want to hang out at work on our days off. We can’t even talk to each other there without being interrupted by fellow employees asking if we can cover their next shift, or joking around purely to distract themselves from the monotony of serving chips and salsa and refilling iced tea. Nick and I have made a tradition of Sunday night dates at this TGI Friday’s in San Antonio, which is 65 miles away from Kerrville. I usually eat French Onion soup and study the table’s cocktail catalog, trying new twists on the martini and server-suggested novelties like the Sour Apple Jolly Rancher. Nick is partial to Jack Daniels ribs and drinks we’ve seen men order in movies—scotch on the rocks or vodka tonic.  Our experiences with alcohol began recently; we’re both 21 and still hiding our drinking from both sets of parents, who don’t partake and taught us that it’s a sin. Driving to San Antonio helps ensure Nick’s parents don’t walk into the same restaurant we’re in. We often drive to the movies afterwards to give us time to sober up completely, but first we make out in the car while still in the TGI Friday’s parking lot, desire running through our veins with the alcohol. Sometimes we have to pull over on our way to the theater for more kissing, lust having built up since the parking lot session.

Matt Damon is relatively safe in this TGI Friday’s. Cell phones don’t even have cameras yet. Twitter and Facebook don’t exist. The obedient servers leave Matt Damon alone. As far as I can tell, only our server had a morsel of rebellion or excitement large enough to leak the news. Nick and I eat and drink, peering now and then at Real Matt Damon, who never does anything interesting. His feet are braced on the barstool rungs and he drinks his Amstel Light, eyes intent on the game. Nick and I debate obtaining his autograph vs. leaving him alone, ultimately agreeing to honor his wish for privacy. My decision is based more on the fact that I am too scared to talk to him than my concern for his privacy. I continue questioning my choice even as I settle into our car. I could still gather my bravery and speak to Genuine Matt Damon.

After some kissing, which is cut short because our movie is starting soon, we drive to the theater. In the parking lot, we see a girl from our past, walking ahead with a friend. Cindy, vibrant and curly-haired, was our classmate at Bible school three years ago, where Nick and I met each other. We haven’t seen her since graduation, and all three of us are surprised at the coincidence. Cindy is surprised Nick and I are still together; we aren’t surprised at her surprise. Only a few of the many relationships started at that school are still going three years later. I try to think of something interesting to say—something to show that my life has been productive since Bible school.  First I mention our night classes at Schreiner and our work at Chili’s, which makes for boring conversation. Then I remember the Matt Damon incident and blurt it out to Cindy. The girls yelp, grip each other’s arms, and ask if we think Matt Damon is still there. After checking the time, Nick and I decide he probably is—the game is still on. Cindy and her friend discuss skipping their movie and ambushing Matt Damon instead. It isn’t a hard choice for them. They thank us effusively with their smiling fuchsia lips, and rush off arm in arm, teetering on high heels, tossing their stiff amber curls, a floral scent trailing behind them.

We never see Cindy again, not even on Facebook or Twitter years later. I don’t know what happens next: if the two young women rush up to the bar and trip on their heels, spilling Amstel Light all over Matt Damon, if maybe one loses her head and plants a fuchsia lip print on Matt Damon’s face. Maybe they loudly fawn over him, causing him to miss an important Super Bowl play.

I’m sorry, Matt Damon. I sold you out to seem interesting. If I ever see you again, I will ignore you and tell no one. I think I might be interesting enough on my own now. Then again, here I am years later, still bragging about seeing you.  I’m more artful now about it though, and I can’t give away your current location, just this story of my experience. Maybe I will say hi, next time, and tell you about the time you could have met me.

Sarah Broussard Weaver is an MFA candidate at the Rainier Writing Workshop. Her work has appeared in Stonecoast Review, Lunch Ticket, River Teeth, and Hippocampus, among others. She lives in the Pacific Northwest.