References to Alcoholic Drinking in My Grandfather’s WWII Diary 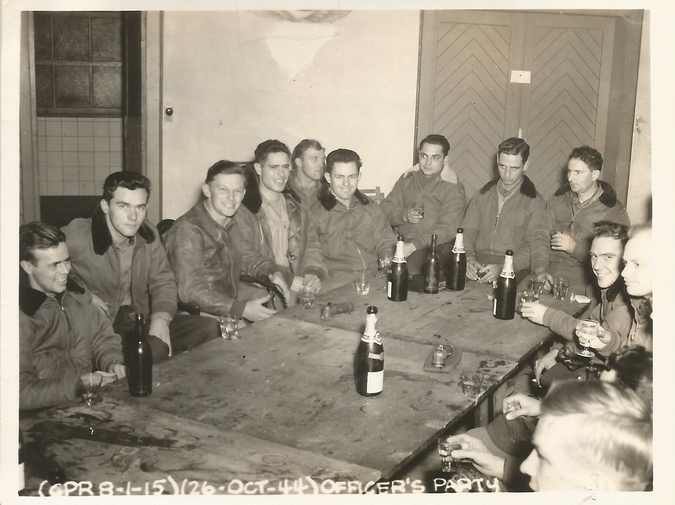 May 24, 1944 – played Pinochle with the boys all day & nite. Won a little. Drank a pint of whiskey straight and get a little high.

June 13, 1944 – Again, no mission as the weather over France was stinko. The squadron had a party but nothing but beer so it wasn’t too hot.

June 16, 1944 – Poor weather, so again no flying. Got a little soused up on gin at the club & whiskey at the room. Played blackjack and with my usual luck lost 15 pounds. Oh, my. I believe I will not gamble again.

June 20, 1944 – Left for London tonite. Arrived OK and got a room OK. Ate at a nice place. A French restaurant and there were French, Polish, English, American, Canadian etc people in the place. Pretty good food & drink, but expensive. It being the eve of Doc’s birthday, we got a little drunk and my how the money does flow when one is drunk. And so to bed. But were awakened by the “pilotless planes” – four of the rascals – which we heard come over, motors stop & seconds later the vibrations when they hit. Quite thrilling, listening to them & wondering if it would be close.

July 1, 1944 – Again rain and low overcast conditions. They had some alcohol and I started mixing it – very unwisely – with gambling. I ended up losing about $30 and drinking triple gins (at $6 each). Oh, me, a big head and small pocket book were the natural results. My gambling has gotta’ cease. I’m not lucky sober and I have no brains drunk. All my luck must be in love. Are you listening, darlin’?

July 5, 1944 – Not much doing in the way of flying and I got in to London early (1700). I got Joe Waits to fly me in in the C-78. Got a room at the South Kensington – a nice hotel, just a little in the order of an Old Ladies’ Home. Just as I was registering a bomb fell a block away, and scared me to death. It blew a sign off the desk and broke some windows. I ate at a “Martinez” restaurant. The food wasn’t bad and the atmosphere good. Drinks good, but expensive. Drank too much again. Met a Canadian (RCAF) from the States & his girl. They saw me drinking alone and asked me to join them. He played football at St. Mary’s, name of Smith, in 1927-28.

July 21, 1944 – Took Dick a ride in an L-5 and stalled it twice on its back, trying to loop it. We went to High Wycombe and drank some and went to a dance. Had a fair time and think Dick did, too.

August 25, 1944 – Dawson & I drank his quart of gin at the ops trailer. He got quite drunk, while I was not quite so plastered.

September 5, 1944 – Went to Paris today. Certainly a swell city. The people, particularly the women, are very well dressed. Their hair also well groomed, although some of the hairdo’s were so outlandish. We arrived in the city in the afternoon & I tried to find a present for M. E., but there is a scarcity of good jewelry & clothes are rationed. It was raining & we had no transportation so didn’t see much of the city. Went to a cabaret & drank champagne at 500 francs a bottle. Steep, but we had a good time. To bed at 930.

September 17, 1944 – bad weather again. Did little but lay around & play bridge. In the evening we started drinking “Vesuvius cocktails” – Vermouth and Cognac. Boy, what a wicked drink. Finally had to go to bed before I fell on my ass. Bought some champagne today. Doc & I sharing 3 cases at $31 (or 1560 francs) each.

September 18, 1944 – Started to winterize our tent today. It is quite a job. Didn’t feel so good, so had only a few beers at Khare & Trenners’ “house-warming.” Bad weather.

September 19, 1944 – Finished our house and had a “house-warming.” It was a dilly. The champagne flowed like mad. And we all got stinko. Link fell off his chair onto the floor and we didn’t even move him. Dawson fell asleep in his chair. Good time was had by all. Bad weather again.

September 24, 1944 – bad weather again today. Went to church this a.m. Got a letter from my honey with a repeat of that picture of her in her bathing suit. She had gotten those of me swimming in Rennes. Played bridge at Simp’s house & drank some champagne. Col. Walker had an attack of appendicitis and was taken to the hospital.

September 28, 1944 – We lost a man today. We had some rail recces that were musts. Vanensfold & Cubberton went out on that one. Cub aborted because all his instruments went out and Van didn’t come back but kept on. He never returned. We all went by the club and got sorta stinko on champagne.

Elizabeth Ellen is the author of four SF/LD books: Person/a: a novel, Fast Machine, Saul Stories and Elizabeth Ellen. She also has a tumblr: http://elizabethellenfastmachine.tumblr.com/ Today would be her Papa Jack's 101st birthday.