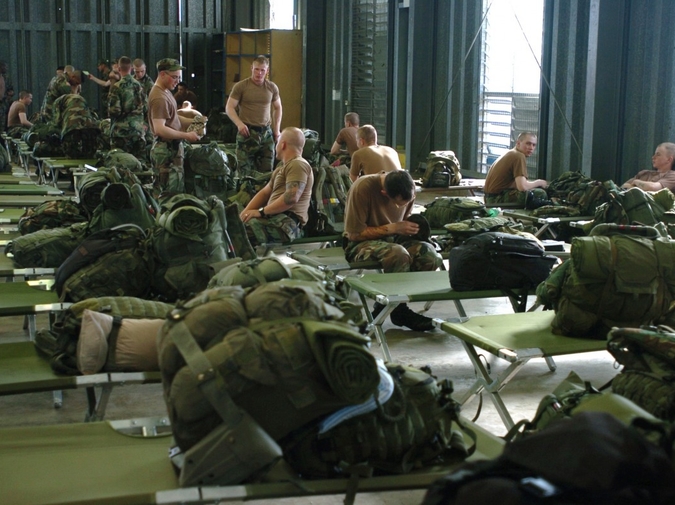 He slept among a pile of used truck tires, bald or blown or spidered with dry rot, his legs crossed at the ankles, hips down in the hole, arms hooked around monstrous treads to keep the rest of him from falling through. We lounged in pallet-wood chairs on the other side of the tire pile and woke him with our excitement as we came up with another anagram for Marine Corps—Arsenic Romp—a fitting analogy which resonated as soon as we spoke it and caused us to laugh at the connections between words. He called us over after he heard us laughing and matching up letters one by one and repeating the phrase and cracking ourselves up. He didn’t find it so funny. We explained the rules of the anagram game and defined our latest anagram in its comedic context—arsenic with its history as a subtle killer, romp as an allusion to our youth—and he played it like he understood our intent but disapproved of our humor. What else you got? A Crimes Porn, we told him, which he dismissed on the grounds of sexual frustration, and so we didn’t even mention I Scream Porn or our favorite—Cream Prison. That’s when we noticed a scorpion doing the bellycrawl up the digital steps of his camouflage trousers, one pixel at a time, creeping right along the thin fabric over his shin. When it stopped crawling, its quarter-sized body blended with the desert pattern so subtly that after we looked away to unsling our rifles and pull off our covers for weapons, we had trouble finding it again. There’s a scorpion, we told him as we scanned his legs for movement, somewhere on you, and he told us he knew and to leave it alone. You knew? Of course, he said with a nonchalance to compliment his posture, and he asked if we had come up with any more anagrams. Cam Prisoner, Reap Crimson. Any others? Mr. Pain Score, Mr. Panic Rose, Mr. RIP Oceans. Now why, he asked, do they have to be so macabre? There are other misters, we told him, but they don’t make much sense. Mr. Iron Space, Mr. Coarse Nip. Now that, he said, chuckling and bouncing in the tire and brushing sand from his sleeves, is funny. We moved in close and scanned his pantlegs and found the scorpion again as it twitched its tail, and we scanned the nearby tires and the ground beneath our feet to ensure there were no more, and we asked why he wasn’t more concerned about the potential dangers of the small but venomous creature crawling up his pantleg. He shifted and caught sight of the scorpion—its tiny tan claws held forth, a tinge of green visible between segments of its body—and he told us he was plenty concerned as he lounged back and stared off at the trucks beyond his boots. Then why don’t you kill it or let us kill it for you? The scorpion twitched, inched further up his leg, stopped aside his knee, faded back into a swatch of the desert design. Remain, he said as he reclined into the tire and let his body sink. Remain what? Remain, he said, works for Marine, and he had to remind us we were playing a game about anagrams. Remain—we spelled it in the air, letter by letter, and we agreed that it worked for Marine, so we challenged him on the rest—what will you do with Corps? I could never kill it unless it stung me, he said, even though I could easily kill it and would like to kill it now, just like you, but there are rules. There are rules, we told him, for the anagram game too—you can’t leave Corps as Corps. He asked why not, not expecting a response, and we reminded him we were having a conversation about a scorpion.