I have no idea who is speaking here, I would never say this, I am against whoever wrote these words. 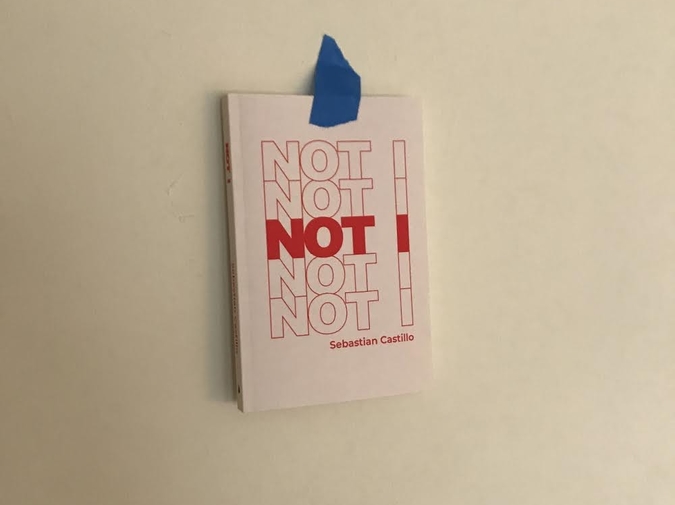 "I have no idea who is speaking here, I would never say this, I am against whoever wrote these words."
A Flash Book Review of ‘Not I’ and Brief Interview with Sebastian Castillo

Perhaps only the work of Franz Kafka was capable of carving out its own channel, one of soul-level depth, that knew no bounds of genre, form or style, one that transcended the page entirely. Since then, many have helped keep this thinning trench running through the decades. Among those with their hands dirty are Thomas Bernhard, Jorge Luis Borges, Donald Barthelme, and Diane Williams (to name a few); and closer to the present are some carrying shovels getting to work, like Blake Butler and Honor Levy; and somewhere out in the ever-darkening landscape of true distinctiveness is Sebastian Castillo, wearing a headlamp, casting light unto it all. That’s not to say he hasn’t started digging; on the contrary, he’s changing its direction entirely, and if not that, then just a nook off the side in which only he can fit. This may sound like hyperbole, but it’s not. Castillo’s work is unlike anything I have read before.

In his second novel, Not I, out now with Word West, Castillo lays out the groundwork of a story shaped as an exercise in grammar. The genre is up for debate; it could easily be a book of poetry, a twelve-act play, or a collection of aphorisms, but it’s much more ambiguous. I choose to call it a novel, maybe because of this indefinability, or because of the novel’s ability to absorb all other texts, but definitely because of how full this book feels. The table of contents is the (supposedly) 12 verb tenses in the English language. A lazier reader might offer a “Ha. Clever,” and downplay the narrative choice to a schtick, an elbow nudge and wink from the author himself; but a sharp, attuned eye would see, by the end of the first section, that what is at play here is a form of life in and of itself.

After the series of epigraphs, which read like the voices of a Greek chorus, the book starts with a birth, a realization of awareness, “I am Sebastian.” Followed by a declaration, “I have much to address.” And what unravels is the development of the kind of bond that only language can make, one of a formed and shared existence. Throughout the speaker’s dispatch—think one of Sebald’s or Bernhard’s on Klonopin—we get a confessional that in its pureness breaks us down to go wherever the speaker wants, to be open to whatever the speaker wishes to give. In its bluntness, when plucking out individual lines, Sebastian feels like a friend sitting across the room, saying whatever comes to mind.

“I got sick to my stomach.”

“I use toilet paper every day.”

“I took beers from your fridge.”

“I got the winning numbers.”

“I have been here before.

I have had enough already, man.

I have done nothing wrong.

I have said all that I can say.

I have gotten suspended from literature.

I have made something for you.

I have gone to indecent lengths, it’s true.

I have known about it for a long time

The sentences become a kind of music. After 80 pages or so of this repetition—do not mistake this for monotony—you start to get the feeling of the author, and even the speaker, slowly backing away from the stage, leaving you kneeling at your own altar, purging up your own confessions, your own admissions about who you are as a person deep down. Let us not forget the title of the book— Not I, possibly borrowing from Beckett and sharing the same simple yet complex vocation of style—but I’d argue, where Castillo makes the title his own is in the first-person narrative that projects itself onto you, the reader. I found myself sharing the same thoughts as the speaker, as if he wrote them down for me, like my own personal stenographer. This would make the title the author’s only statement, with a tinge of denial, reminiscent of any classic sitcom scenario. Who clunked up the car? Not I. Queue devilish smirk.

So, who really is the speaker? This is one of a few delicious paradoxes in the book that one can enjoy chewing on for longer than it will take you to read it (it’s 184 pages in total). The answer is there is no answer. It could be the author, the reader, or it could be all of us at once. The book could be narrating itself. What Castillo has done here is make an impressive mark in favor of what Heidegger meant when he said, “Language is the house of being.” This novel is a living and breathing thing that offers the reader a joyous, witty, at times sad, deep, and intimate reflection of what it means to be a conscious human being. Any reader willing to do the work will come out of this novel with newfound introspection and a deeper understanding of themselves.

My conversation with Sebastian took place over a series of emails where we talked about exceeding boundaries of your own constraint, ambiguity, Samuel Beckett, and a phone call to the dead.

The premise of Not I strikes me as vaguely conceptual, not in a pejorative sense, but rather in the artistic sense, as in the idea of the project as a sort of machine dictating the work. Could you talk a little bit about the process of how this became a book?

Yeah, Not I began conceptually. Or, at least, it began with the constraint, which I thought of as Oulipian in nature. I started writing this book in 2017, so I don’t remember well when or how I first had the idea. I do remember that it started as a distraction: I wanted to work on something that was procedural, that had clear rules and guidelines. At first, I wanted it to resemble a basic elementary school grammar book. However, as I was writing through the tenses, I felt the desire for the project to, somehow, exceed the boundaries of its confinement—to make it so that the seams were bulging. I didn’t want for the book to exist simply as an exercise—the concept and constraints were there to allow something to happen which would not have happened otherwise. Well, that’s my hope.

It was also exciting to limit myself to the most basic elements of English and try to write, out of that, things that were simultaneously quotidian, contradictory, surreal, outlandish, personal, and often untrue.

I think that's what the book accomplishes best, showing what language is capable of. The tenses start basic, and are more inviting, but the further you go along, the more complex they get, kind of turning the reader on their heads and they can feel, like you said, that the seams were bulging. One of my favorite lines reads, "I have been trying to mitigate the effects of my words on your understanding of me." To me, this was the heart of the book and shows just how verb tenses in English dictate so much about perception. For example, in the section 'Simple Past' the speaker's tone takes on an almost nostalgic longing, where in the section 'Simple Future' the tone shifts to a more ambitious, at times motivated voice. Since our thoughts are made up of language, how much do you think the words we tell ourselves affect our perception? Not only of ourselves, but the world around us? And was this something that was on your mind while writing?

I think I can only answer this question obliquely. What I'll say is that often I write things—things that I would only write for myself, like in a private journal—and go back and read them and feel as if I have no idea who said these things, that they don't reflect me, or who I perceive as myself. And I'm not talking about coming back to a journal entry you wrote 10 years ago. I mean something that I've just written—a paragraph, a thought—and then reading it back after the moment of composition. I often think: "I have no idea who is speaking here, I would never say this, I am against whoever wrote these words."

That confliction is in the book, too. What the speaker says at one point might not be true later on. Earlier, we talked about ambiguity being part of the of project. I'm interested in hearing more of your thoughts on that.

I wanted the effect of the book to suggest something elastic regarding the speaker, or the narrator. (I'm still not sure which term is more appropriate, maybe both.) That effect of elasticity creating the possibility that the speaker is sometimes a unified, coherent person talking, and at other times, maybe not. I think that this component, specifically, was influenced by Beckett's Not I. I love Beckett's shorter plays; Krapp's Last Tape is probably my favorite. In Beckett's Not I, the speaker (the mouth?) is relating these intense, visceral details about traumatic events that seem to have happened to the person talking—but then there are these bursts where the speaker, perhaps in response to someone asking who this has happened to says, "What? Who? No! She!"

So, what are some conclusions, whether about your own work or yourself, you've come to from working on this kind of project?

I suppose a meaningful conclusion I came to was that it's often fruitful to follow diversions and accidents, but that you have to create the conditions to experience them.

Like from another favorite line of mine in the book—if you could, who is someone dead that you would call? And what would you say?

Probably not a fun answer, but I would call my mother, who died about two years ago. I would say the expected things. But even in fantasies like this, I've always thought about an aphorism I came across once from Strabo, about the past: "It is difficult to find those places today, and you would be no better off if you did, because no one lives there."

Not I is available now from Word West

Nick Farriella is a writer living in New Jersey. His fiction has appeared in McSweeney’s, Joyland Magazine, Hobart, Barrelhouse, and elsewhere.

Sebastian Castillo is the author of Not I (word west press) and 49 Venezuelan Novels (Bottlecap Press). He lives in New York, where he teaches writing.