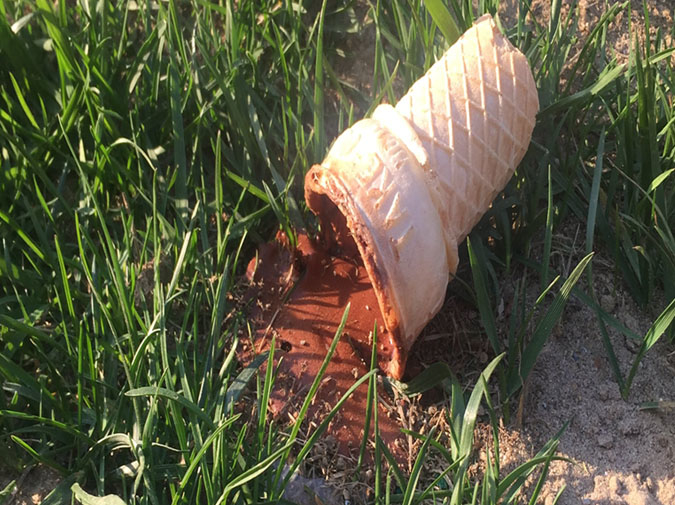 A spoonful of vanilla ice cream crosses oceans of history. Hold that dollop on the back of your tongue.  Consider.

Today, nothing could be whiter than vanilla ice cream.  Vanilla means white.  It means boring, ordinary, blank. The opposite of exotic, it connotes bland, missionary sex and unadorned, spiceless, practically tasteless food without swirls or heat.  Vanilla, colorless and insensible, has become the Caucasian flavor: the null flavor of the null race.

The plant itself, an orchid species growing in Mesoamerica, grows brown, as brown as the cacao bean, progenitor of chocolate.  In the 15th century, the Aztecs called it black flower, even though today’s extract bottle illustrations always depict its blooms as white. But the flowers are not where the flavor is.  For that, look deeper, under their sheaths, where the pods bed. The Spanish named the plant the diminutive form of the word vaina, which shares roots with vagina, that other sheathed treasure the conquistadors claimed.

When Cortes and his men tasted the native vanilla, their mouths watered.  They wanted more. They took the plant back to their continent as an exotic. Ex-otic, from the outside—from the POV of Europe.  Vanilla’s here became there, its in situ outlanded.

Away from its homeland, the tender, mysterious little plant failed to thrive.  It resisted transplantation.  It needed its native land, in part because, despite the contemporary connotations, the vanilla plant has quite an interesting sex life.  A hermaphrodite, the orchid needs to be cross-pollinated, a service only a local species of bee specific to Mesoamerica can provide. In other hot and humid colonized lands the vine might grow, but without its native culture the trans-plant wouldn’t bear fruit.

Infusing history with unsweetened irony, a 12-year-old slave on the French-run island of Réunion, in the Indian Ocean, solved this problem.  In 1841, Edmond Albius figured out a technique for artificial hand-pollination of the plant. This bee-less sex technique gave rise to large vanilla plantations in the warm, humid climates of Madagascar and Indonesia and Tahiti, where European colonists could employ slave labor to produce this very labor-intensive commodity.

With the demise of (legal) slavery, in stepped western science.  “Progress” happened.  Chemists broke down the spice into its constituent molecules, and labeled the key component vanillin. Next came techniques to reproduce vanillin in the lab, and then to mass-produce it cheaply.  Today, much of the vanillin produced is synthesized from a by-product of paper pulp. You can buy Artificial or Imitation Vanilla—vanillin suspended in clear ethyl alcohol—very cheaply.  So cheap is this additive that it’s thrown into all kinds of food to boost flavor. Vanillin is the most common of those “artificial flavors added, invisibly backing other flavors. We taste it all the time without even knowing it—so often, that we’ve stopped tasting it. “Progress” made vanilla white, ubiquitous, dominant, and unremarkable.

Recently some consumers have begun demanding natural vanilla in place of synthetic flavoring. They want the whole bean with its tell-tale black specks, not its synthetic, colorless or artificially colored substitute. They want to re-spice and un-whiten vanilla.

Return to that now-melted spoonful in your mouth. Feel with your tongue for its organic energies, its full range of hues and colors and cultures. Can you taste its un-white-washed history, its full palette of hidden secrets and sufferings? When that bolus of vanilla ice cream oozes down your throat, what color is it now?

Deborah Thompson is a Professor of English at Colorado State University, where teaches literature and writing. She helped to develop CSU’s master’s degree in Creative Nonfiction. A Pushcart prizewinner, she has published creative essays in venues such as Briar Cliff, Creative Nonfiction, Fourth Genre, The Iowa Review, The Missouri Review, Kenyon Review Online, Passages North, and Upstreet.  She has won the Missouri Review and Iowa Review awards in creative nonfiction, among others.  Currently, she’s working on a book project on relations between humans and other animals.