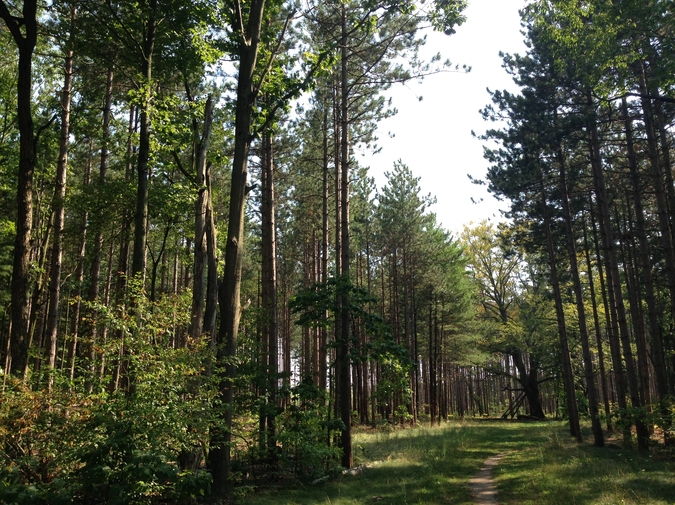 In the middle of our city are the woods, which are full of animals.

Kara asks: “How much further, Marcus? Do you remember?”

I don't remember. The woods get bigger each time we come. They can’t be too big, though, because I can still hear the freeway nearby. Or maybe we’re twisted up, going in circles. I don’t know for sure anymore. We just have to find the house is all.

The deeper into the woods we go, the more animals we see. At first, it's only packs of skinny dogs gone feral, abandoned by their human families—I know that somewhere in each of them still scampers a sleepy puppy, one that used to get hugs and table scraps, so I’m not scared. They’ve got that mangy fur and their teeth drip with drool. There are cats, too, but they don't come close. Too skittish.

There are snakes. Lizards of all kinds. Too many of them. This is my biggest fear. Kara said that was cool, like Indiana Jones, but does it make a difference? No, it never could. Every time we step over a log I have to stop and check first.

Our grandmother watches us some of the time. The rest of the time, we do what we want. At school, the adults asked a lot of questions about that, so we stopped going. We haven’t gone down to the school in weeks or maybe months, I don’t know—our watches stopped a long time ago, too, and after that we threw them in the creek down by the park just to watch them splash.

My grandma said that these woods have been our family’s woods for hundreds of years. When the city’s downtown built itself up around her land, my grandmother refused to sell even an inch of it. The city got bigger and sprawled wider, and she just retreated up inside of herself because she said it all made her nervous. She stopped leaving her little house. Her body even got smaller. She just stayed there with all her stuff: stacks of newspapers like a maze in the kitchen, empty soda bottles, these old little porcelain statues. Most of those were broken but she just piled them up. Eventually there wasn’t much room for us to sleep in there. When the cats from outside started sleeping in the house, Grandma didn’t mind. She was nice like that. But eventually Kara and I didn’t like it there anymore so we started staying at other places, too, and just going to Grandma’s house every once in a while. One time we saw a huge turtle by the shed and we could both sit on it, so we did. We used it as a chair the whole afternoon and it didn’t even notice.

Grandma’s land butts up against the zoo and a little park. That’s where most of the animals come from, I guess. It’s the only woods in the whole city, so people bring their pets out here when they don’t love them anymore. And some stuff gets out of the zoo. At the edge of the woods it just turns to downtown buildings. They rise up around our woods like a wall holding everything in. Everyone hates these woods and wants to put up more buildings here and I guess soon they’ll be able to.

Grandma’s house is barely standing when we finally find it. The water and electricity have been off a long time. Her body’s in there somewhere, maybe underneath some of her stuff, but we don’t want to look for it. We can smell it. Last time we saw her we knew it would be coming, and I guess we put off coming back because we didn’t want to deal with it. Now it’s just us for sure.

Nobody ever really wanted to help Grandma or help us so we decided fuck you. We knew it was a bad word but we don’t care about the rules. Maybe you have never felt those words sink into your skin like a prick from a thorn. Maybe you have never said them for real. But each day that passes we are more sure that fuck you is what we want to say to everyone. From now on, it’s just us. Me and Kara. We can live in this house with the animals and make it work. It’s safer here than out there. Outside, the packs of dogs are snuffing near the doors. I go into the kitchen to get some newspapers and maybe a wooden chair, anything that we can use to build a fire.

Christopher Moyer lives in Memphis, Tennessee, where he works as a freelance writer and designer. He also serves as an editor for The Pinch. Find out more at bareyourteeth.com or follow him at @stchristopher.