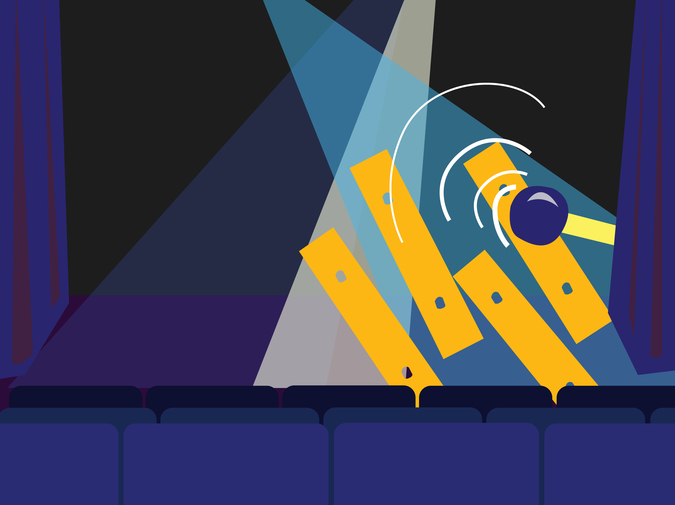 I was going to see Verdi’s Falstaff with Robin.  My driver said “I hate Bill de Blasio. The MTA is corrupt. Uber is corrupt. I’ve been driving taxi since 1993. I know New York, you said Lincoln Center and I knew where to go. I am in debt for $600,000.” I said “I hope things get better soon” even though they won’t.

I got there early. I waited in the Met Gift Shop. They sold everything: clothes, tote bags, Wagner-themed playing cards, kitschy plates that said “Good wine, Good food, Good times,” and a glass liquor container that said “Liquid Assets” in motifying cursive. Further back they had hundreds of DVDs of past Met performances and little music boxes that played tinny versions of “Flight of the Valkyries.” Robin joined me and said “That’s so funny.”

We headed upstairs. We heard the xylophone that said it was time to sit down; the xylophone player was literally chasing us up the stairs. But we kept hanging out, Robin had to use the bathroom. Then came a deep “church bell, it’s midnight” sound, a demand instead of an invitation. I’d never stayed out late enough to hear that sound before. It reminded me of Falstaff hearing the chimes at midnight; in Henry IV, Part 2 Falstaff’s old friend says to him “We had some crazy times when we were young, didn’t we?” And Falstaff answers “Yeah, we’ve heard the chimes at midnight.”

Falstaff’s first two acts make up the first half of the performance which takes place in a nice hotel. After each scene the curtain came down and our subtitle screens read “BRIEF PAUSE” but the pauses weren’t that brief, some went on for a few minutes while stagehands heaved enormous wooden walls into different configurations so a bedroom could become a dining room could become a smoker’s lounge. Robin and I kept getting fooled, thinking it was finally time for intermission whenever the curtain came down.

Almost every scene was cast in a warm light up to a point; there was always a pivotal moment when blue light flooded the stage and the opera’s tone shifted from farce to something sadder. At these moments you remember Falstaff’s old and living pretty poorly; for every braggadocious announcement, every cocky attempt to swindle a rich woman out of her money, there’s a humiliation, an astronomical bill, a reflection on his saggy skin, his old age, someone swearing they want to kill him--at one point Falstaff’s literally thrown into a river.

How does Falstaff survive it? Why does he endure it? Who is this guy?

Falstaff is into gross pleasures and absurdities. In Shakespeare, he’s a hedonist with a heart of gold, a surrogate father to Prince Hal who hates his dad. Then Hal’s dad dies and Hal has to become King Henry V. When he puts on the crown, Henry turns against Falstaff. He says “You drunk loser! You pathetic coward! I don’t even know you.” Falstaff is heartbroken and we’re led to think the rest of his life was spent in the melancholy pursuit of unshared pleasure. What made Falstaff’s destitute life so fun before is that he had a friend—a son—with whom to share it.

I only know that because of Harold Bloom.

I got into Bloom because as a kid I wanted to be pretentious. I needed someone to tell me it was okay to have an inflated sense of a book’s importance. When I was in middle school I referred to my “English” or “Literature” class; my mom called it “Reading and Writing.”

I was going through YouTube (early, pre-ads) and found Harold Bloom videos. He was talking about why books were better than life, important, worth arguing about. When I was a kid, I loved him. I got Anxiety of Influence for my 14th birthday and I loved his argument that you get inspired to write by a literary father figure who you then have to symbolically kill. I asked my uncle, who’d also read Bloom, “Can I be influenced on purpose?” I couldn’t wait to feel the anxiety of influence. I loved the artificial drama, reading being life and death. In a lot of ways, Bloom represented culture to me—something you could touch once you read over 1,000 books and lived in New York.

I don’t feel the same way about Bloom now, though. He’s got huge blind spots on and off the page and there’s something fucked up about his canonization fetish (pick your favorite pejorative “-ist” and it’ll probably stick). But you’re always grateful for whoever lies to you in a way that makes you want to keep doing something you love and shouldn’t do: reading and writing.

A friend gave me a galley of what might be Bloom’s last book. He talks about the books that’ve meant the most to him and so many are by dead friends. He talks about how frail he is and how he falls down and needs his assistants to take dictation. He, my personal Falstaff, will be dead soon.

Verdi’s Falstaff is adapted mostly from The Merry Wives of Windsor, rather than the Henry IV plays. The action here takes place after Hal rejects Falstaff in Henry IV, Part 2 but before news of his death is delivered in Henry V. So why would Verdi focus on the Falstaff of loss, the abandoned buffoon, living through the excess years of his life?

Because Verdi’s whole life was excess: his wife and two kids died when he was 27. Later he had to give up a daughter for adoption because he wasn’t married to her mother. He lived through the things we think we could never live through. Verdi wrote Falstaff (when he was almost 80, which in 1893 was old) because he knew, like Falstaff, that you have to laugh. Melancholy, comedy, death’s advance: they form the girdle that shapes your excess years. It’s funny you survived so much pain. It’s funny your loved ones are gone. It’s funny you’ll be gone soon too. It has to be.

And Falstaff is funny, light in the best sense of the word. Falstaff is maybe the most fun I’ve ever had at the opera. By “fun” I mean Falstaff wasn’t asking me to treat it seriously. I used to go to operas for the same reason I read books post-Bloom: to rack up culture points (“Do it for Harold!”). Certain operas (e.g. Don Giovanni, all of Wagner) encourage that attitude. But it’s not real, or at least not as real as just laughing at a bumbling Italian goliard. Sometimes going to the opera (going to some operas--like reading some books, seeing some movies) feels as exhausting as doing your taxes. But Falstaff didn’t feel like cultural transaction--maybe because Falstaff knows culture isn’t valuable. You know what’s valuable? “Good wine, Good food, Good times.”

Falstaff revels in self-aware slapstick, the comedy of obviousness. We get to hear the words “John” and “Meg” in heavy Italian accents. At the end of the opera, Falstaff rolls down a stage-length table on his stomach in his dirty underwear. An old miserable doctor is tricked into marrying the oafish Bardolfo instead of the young and beautiful Nanetta--so when he realizes his mistake, the doctor says “I MARRIED BARDOLFO?!” Everybody says at the same time “EVERYBODY’S TALKING AT THE SAME TIME, I CAN’T UNDERSTAND ANYTHING!”

During intermission Robin and I looked at an enormous Chagall painting on the second floor. The Met has two Chagalls, both of which are so big you can see them from across the street: The Triumph of Music on the left and The Sources of Music on the right.  We were in front of The Triumph of Music, a Christmas red canvas featuring crudely drawn angels, a blue wizard playing a violin, dancers stretching on a strip of green in the top-left corner, and, in the center, a french horn spiral whose innermost curl becomes a plump ball. We laughed at the cartoonish excess. I said “That’s so funny.”

Like Don Giovanni, Falstaff ends with a demand that the main character repent. Unlike Don Giovanni, Falstaff does repent. He realizes more life is better than being right. He loves himself but isn’t self-serious. Everybody sings a song about how life is a joke and “Everyone is fooled.” The house lights come up and Falstaff points at everyone in the audience as he repeats “Everyone is fooled.” They all laugh and the curtain comes down, though a pair of reindeer horns remain visible. A lot of Falstaff revolves around who’s wearing the horns: who’s the butt of the joke?

The joke is on us and it’s funny.