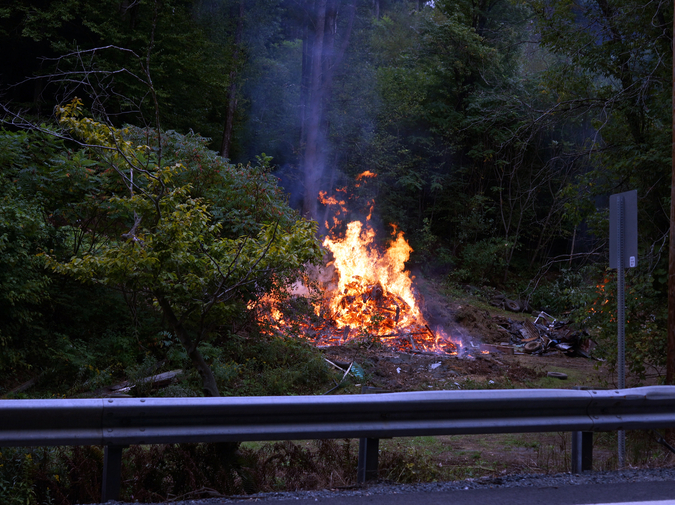 On the job site one morning they found a dead squirrel. There was no indication of what had killed it. The fur was intact and the eyes were closed. The mouth was slightly open and the front paws were flat together as if in prayer. Chris nudged the little corpse with his steel toe. “Stiff as timber,” he said. Bob pulled on his gloves. “Hey, everybody! Look at me! Damn, it’s cold out here. Maybe that’s what killed me!” He turned the squirrel’s face toward him and grinned crazily at the dead animal. “Stick him in the tree,” Chris said.

Bob pried apart the hands and feet and set the squirrel on a low magnolia branch. The animal’s small limbs snapped back together, holding it in place. Nick stood by the brush pile sipping coffee from his thermos cap. He thought he should say something. Tell them to quit fucking around and get to work. But they’d only just got there. First start a fire, then get warm, then work. He set his cup down on the table-saw, twisted a paper bag into a braid, and dipped it in gasoline. “Bob, let me see your lighter.”

Nick lit the bag and held it under the pile of trash and wood scraps. The flame caught and began to spread.

“Throw some of that diesel on there,” Bob said.

Nick hauled a five gallon bucket from his truck bed, set it on the ground, and twisted off the lid.

Chris peered down at the bucket. “Looks fucking radioactive.”

Bob tossed a lit match in the bucket of diesel. Chris stumbled backwards almost into the burn pile. Bob was laughing. Nick sipped his coffee. He’d seen the trick before.

“What the fuck, man?” Chris looked at the black shriveled match floating on the diesel’s surface.

“Match ain’t hot enough to fire up diesel,” Bob said. “Gotta be real hot for it to ignite.”

“You coulda’ just told me that.”

“Yeah, but it wouldn’t a been as much fun.” Bob grinned and took a long drag off his cigarette. A casual gush of smoke floated out of his mouth and hovered around his head like fog. Chris wasn’t laughing. “Bob, one of these days I’m going to climb in the back of your mini-van and take a giant shit.” Bob quit smiling. “Anytime you feel froggy boy, you just jump.”

Chris was careful to keep his hands still. The little redneck had to raise his face to look him in the eyes. He smiled. “I’m just kidding, Bob. I wouldn’t shit in your van.”

“Uh-huh.” Bob pulled another long drag off his cigarette and turned toward the fire.

Nick lifted the bucket. Diesel sloshed on his boot and made a little trail toward the fire. He splashed some over the debris, careful not to put out what was already burning and set the bucket away from the fire and the three of them stood around getting warm, not saying anything. The sky was the color of ice and the trees were leafless and gray. After awhile, Bob used a marking pencil and his gloved fingers to pry open the squirrel’s mouth and put a cigarette between its jaws. “Hey, look. He’s just trying to relax.” Bob held his lighter to the cigarette but it didn’t take.

The fire was burning steady now. Nick emptied his cup on the flames. “Ya’ll think we might get some goddamn work done today.” Bob started moving. “Waiting on you, boss.”

Nick stood at the fire with hands at his sides, watching the flames eat their way along a length of split trim. The paint bubbled. The wood blackened. The flames formed a circle in the pile and coned upward in orange curls, spitting wisps of smoke in the air, like something dripping upside down. “I bet I could jump that,” he said.

The pile was no bigger than a wheel-barrow turned over. The flames added another few feet to its height.

Bob took a prospector’s squinting-look at the fire. “With a running start maybe.”

Chris pulled on his tool belt. The fire was about four feet around by now, the flames licking to about the height of a man’s waist. “Hell no,” he said.

Nick stared at the fire. “I got twenty says I can.”

Nick was the tallest of the three, long legs and long arms, with a belly just starting to grow since hitting forty. His memory convinced him this would be a breeze, an easy twenty bucks. He liked the idea of taking Bob’s money. “I get a running start,” Nick said.

“Ain’t nobody gonna leap that from a stand still.”

Nick circled the fire and found the clearest path on either side, room to run, and a clean landing spot. He took a few steps back. “Ready?”

Bob nodded and moved out of the way. Chris stood by the trucks.

“Don’t burn your nuts off.”

Bob opened his wallet, counted out a ten, a five and a collection of crumpled ones. “Right here. Twenty bucks says you can’t do it.”

Nick half-crouched to a sprinter’s stance.

“Hey, what about my money?” Bob said.

“Bullshit you will. I want to see the cash.”

“I think you’re going to bust your ass and I’m going to make some money.”

Nick gazed into the fire like it was getting ready to charge him. Chris just leaned against his truck, happy for anything that kept them from working.

“Waiting on you,” Bob said, lighting another cigarette.

Nick rolled his shoulders, took a deep breathe, and took off. It wasn’t far, maybe twenty feet between him and the fire. He started his jump too early and felt it right away. He cleared the top, but his back leg pulled around instead of following behind him and he came down crooked on the end of a board and stumbled to the dirt, rolling and stopping on his back away from the fire. He slapped his legs and checked himself for fire as he stood up. “Pay up.”

Bob with his arms folded. “That wasn’t worth no twenty bucks.”

“You barely cleared it.”

“Nothing in there about barely anything. Alls we said was clear it.”

“You got to stick the landing,” Chris said.

Nick looked at him.

“Yeah. If this was the Olympics you’d get a medal made out of tinfoil.”

Nick spit on the ground. “Well this ain’t the Olympics and you assholes aren’t judges. I cleared the fire. You owe me that twenty.”

“Thought you wanted to get to work,” Bob said.

Bob looked at him. “That wasn’t the damn deal.”

Nick said, “You jump it, I’ll give you double or nothing.”

“You just saw me do it. Forty bucks. And you’re lighter than me. That buys a lot of Natty Light.”

“I ain’t jumping that,” Chris said. He looked at the fire and shook his head. “I’ll burn my nuts off.”

Bob took a stance at the spot where Nick had started. He sucked a few quick drags off his cigarette and flicked it at the fire. “Fuck you, you son of a bitch.” He hollered something and started to run. He cleared the fire with ease, got both feet down, and managed to stay upright. “Alright, motherfuckers, where’s my forty dollars?”

Bob raised a finger. “Hey now, you said if I jumped it you’d owe me forty. Now I want to see it.”

Nick smiled at him. “Relax, I’m good for it. I want to see fatty jump it first.”

“Fuck that,” he said. Bob lit a fresh cigarette. “Don’t puss out on us.” Nick sniffed the air. “You smell that?” Both men raised their noses. “Smells like pussy,” Nick said.

“Fuck ya’ll.” Chris took out his hammer like he had something to use it for, then just dropped it back through the loop on his belt. It swung against his leg. He was screwed now. His body had gotten cold. He walked closer to the fire. The heat was incredible. The fire sounded like a diesel engine idling in the cold.

“Look, Mr. squirrel can do it.” Bob took the dead squirrel out of the tree and tossed it over the fire at Nick. He stepped out of the way without uncrossing his arms. The squirrel soundlessly hit the ground and Nick kicked it into the fire.“Fucking disgusting,” he said. “That thing probably died of AIDS.”

“I was gonna leave it in the tree,” said Bob. “For the painters to find.”

“Easier than burying him,” Nick said.

Flames rippled over the little corpse. In seconds the thing was consumed, unrecognizable as anything but a charred tree limb.

“You gonna jump that fire or what? We got work to do.”

The pressure on Chris seemed to have changed. Now they really wanted him to jump, for their own sakes. Because if he didn’t they couldn’t be expected to tolerate his fear. He would disgrace them simply with his presence. He’d make them all sick.

Chris let his tool belt drop to the ground.. Nick and Bob didn’t say anything. He went to the spot where they both had started. He lowered himself, one leg back, in what he imagined and hoped looked like a runner’s starting stance. Crouched that way, the fire appeared even taller than before. The crackling sounded like a roar. Even twenty feet away he imagined the heat reaching up and pulling him in.

What finally got him moving was the knowing that pain was going to be part of the deal. Once he’d made peace with that—that it would hurt—that he’d burn and die, then he wasn’t afraid anymore. Then it became the last thing he’d do and so, the only thing.

Ben L. Ziegler received a BA in Creative Writing from the Santa Fe University of Art and Design. More of his prose work can be found online at Pyragraph, Meowwolf Publishing, Dead Guns Press, and benzieglermoviewrite.wordpress.com. He was born in Idaho, raised in Louisiana, and lives in New Mexico.