Baby They Don’t Know About Us 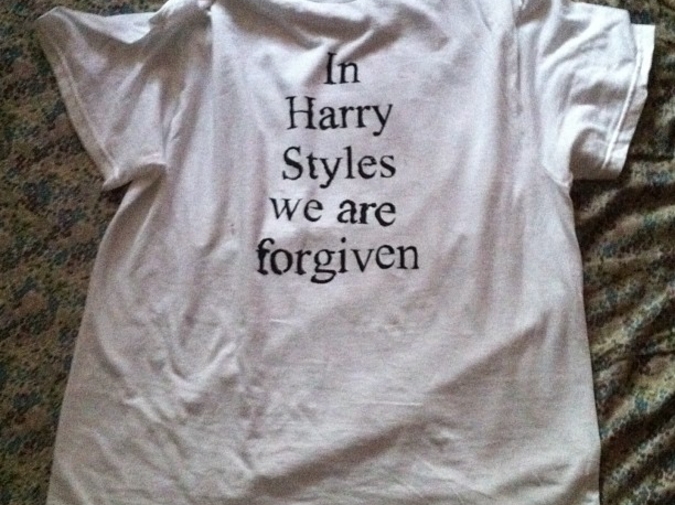 My cousin Anabella is almost 16. She’s into musical theatre. She posts pictures of froyo on her Instagram has four times more followers than me. Her favorite member of One Direction is Niall.

I’m almost 25. I’m into cheap wine and Harry Potter fanfiction. I work three part time jobs. I file my own taxes. I am an adult woman. My favorite member of One Direction is also Niall. But I had better seats than her at the Chicago show.

At my last family gathering, I sat next to Ana at the dinner table and we talked about the latest One Direction perfume ad—the one where the boys dress up like robbers and drop in on cables from the ceiling of a bank vault to steal a precious bottle of You & I (Not to be confused with their other perfume, That Moment, or their other other perfume, Our Moment—which I may or may not be wearing right now.)

I’m sort of obsessed with this rift between Ana and me. She’s clearly their target audience—young and optimistic, with the ability to get a hundred likes on her selfies.  I have an increasingly hostile OKCupid profile. I never had any teenage romance, let alone the kind One Direction harmonizes about. In fact,  the feminist in me worries sometimes about enforcing romance tropes like “soulmates” and “meant to be” to a receptive audience of young girls.

I’d say I don’t know how I got here, but I do. I went and saw that god damn documentary with my roommate, Paige. We learned all about Harry and Louis and Liam and Niall and Zayn. How they met on the X-Factor and formed a boy band, and now they tour the world, pulling pranks and trying out new hairstyles and singing about how they wanna be your last first kiss, girl.

When people ask me about it, they want to detect some irony in my obsession. And I do recognize the sort of sad humor behind ordering a set of One Direction plastic party cups on eBay for drinking Carlo Rossi on weeknights. Like maybe my life has finally slipped out of my control. But it's also important that you know I am earnest.

I really, truly love them. They make me happy. I actually enjoy listening to their music, even the song with the line "It hurts me to think that you've ever cried."

Set the scene: August 30, 2014. There are 60,000 seats at Soldier Field, and it is sold out for two nights. A lime-a-Rita costs $9. Waves of teen girls scream in the stands, their enthusiasm catching as their pitch rises. It's not a loud as you might think. I am wearing a hand-stenciled t-shirt that says "In Harry Styles We Are Forgiven."

The girl next to me is drinking a beer, which is a relief, because it means Paige and I aren't the only ones over the drinking age who shelled out for floor seats.

I am largely a self-aware person, and I usually have a decent check on my emotions.

When those five pop stars came on stage, I screamed. I screamed like my voice really mattered, like they would pick out my shriek from 60,000 others and see that I was pure of heart. Did I think that out of the ocean of twelve year old girls, they would pull me on stage? If they had pulled me on stage, what would I have even done? I probably would have thrown up. I felt like we were all shipwreck survivors, those 60,000 girls and I, a sea of desperate arms reaching for five lone lifeboats.

When I started writing this, I asked Paige what she remembers most from that night. She said, “When stupid Harry pulled that dumb little bitch on stage.” When she says “That dumb little bitch,” she means an eight year old girl with a broken arm. Fuck that bitch.

I screamed for 2 hours. I screamed their names, I screamed the lyrics. Every five minutes or so I screamed "What the fuck" which made the teen girls in front of me turn around and laugh.

"I've never seen you like this," Paige said as I blew an earnest kiss towards the stage.

I wanted to say "I've never felt like this," but I didn't have the cognitive ability, so instead I said "LOOK AT NIALL." She did, and she screamed too.

The next day I felt kind of unhinged--hung over even though I hadn't had a $9 lime-a-Rita. I kept asking Paige important questions about Zayn Malik. How can a boy who is famous for being handsome be even MORE handsome in person? She said she didn’t know.

You’ll be glad to know I did not join the throngs of girls outside the Langham Hotel during their two-night stay, even though my bus drove directly past. I will admit that Paige and I pieced together precisely where they were staying by scrutinizing the band’s Instagrams and tweets. My office sits less than a mile away, and as I sat on my lunch break, I entertained an elaborate daydream where the boys wandered into the Panda Express where I was eating alone. This did not happen. I finished my orange chicken and went back to my desk.

They are so far removed from my life of public transit and dirty dishes that they seem like mythical creatures. I can’t quite believe their tousled hair, sparkling eyes and earnest belief in dancing until the sun comes up. I just want to write fanfiction where they are all safe and healthy and fiscally responsible.

Here I will pause for the important fact that they are all over 20 now. Yes, some of them are younger than my younger brother, but technically they are men. Some of them can grow facial hair. A man band.

In fact, they all kind of look like dirtbag angels these days. Maybe it’s their rebellious phase. In early photoshoots, they wear khakis and polo shirts. Now, they wear skinny jeans and dirty t-shirts. Sometimes you can find a candid photo of Louis smoking a cigarette. They look like real trash, and I am super into it. I complained the other day that they haven’t released new merchandise lately, and Paige pointed out how creepy it would be for a preteen girl to have twin bed sheets printed with these dreamy grown-ass garbage people.

The best way I can describe my devotion is simple. They make me stupid happy. This love is not cloaked in irony or buried under layers of academic bullshit. Because the older I get, the more anxious I've become, and it's nice to have one facet of my life I never overthink. The sad reality of growing up is that not a lot of things make me mindlessly happy any more. It’s nice to have one thing that makes you giddy, even if that thing is a British boy band.

Vehemently hating popular things does not make you smarter! Stop telling everyone you've never seen an episode of Keeping Up With The Kardashians. I’m here today to say that I love One Direction, and I am not ashamed.

My dad came over the other week and looked around my apartment—at the 1D calendar hanging under the mantle, the pictures we ripped out of J14 and taped above the couch “as a joke”—and he said “Meg, it looks like you’re living with a bunch of preteens.” And I said “Get out, dad! Happy birthday, but get out!”

I think Paige and I fuel each other, here. If I didn’t live with Paige, I think I’d still like One Direction. But I don’t think I’d give into every fangirl whim that crosses my radar. The problem is that we constantly reinforce each other’s addictions. Should we listen to the entire One Direction discography while we drive to the Chili’s in Skokie? Why the hell not? Should we start a podcast called 2 Girls 1D? Who’s going to stop us.

Still, I have this recurring nightmare that the headphones are going to come out of my computer jack at work and “Baby say yeah, yeah, yeah,” will fill the room of hip, silent web developers. I’m not necessarily secretive about it—I have worn a One Direction sweatshirt on casual Fridays—but I also feel weird admitting that every single email campaign I’ve sent out has been set to this very specific soundtrack.

There’s a song called “Little Things” that’s about all the little insecurities that actually make the boys love you more. The crinkles by your eyes, the sound of your voice on tape, the dimples in your back at the bottom of your spine. Sometimes I feel weird that 1D focuses so constantly on girl’s insecurities. I don’t even want to tackle the toxic reasoning behind “You don’t know you’re beautiful…And that’s what makes you beautiful.” But in Little Things, there’s this one line. It’s a Niall solo. He’s the Irish one who plays guitar, and he has this sort of husky voice. It’s easy to imagine him staring into the depths of your soul with his hunky blue eyes as he says, “You’ll never treat yourself right, darling, but I want you to.”

Every time that line comes on at work, I stop typing in MailChimp, and I physically turn away from my computer, and I stare out the window, starry-eyed, past the parking garage on Harrison.

Maybe I’m not as much of a cynic as I’d like to believe.

I found this note in my journal the other day. Back in the very beginning, when Paige and I had seen the movie but maybe didn’t know all the lyrics to every song, we were sitting on the back porch drinking screwdrivers and scolling the internet on our phones. “Paige,” I said. “This whole One Direction thing. It scares me how much I love them.”

She looked up at me. “Real love should scare you,” she said. Then she showed me a picture of Harry Styles on her phone. He looked beautiful, so full of promise.

Megan Kirby lives and writes in Chicago. She also publishes some zines. One is about The NeverEnding Story. She first performed this essay at The Marrow, a Chicago reading series. You can find her on Twitter at @megankirb