A Lesbian's Guide to Cave Exploration 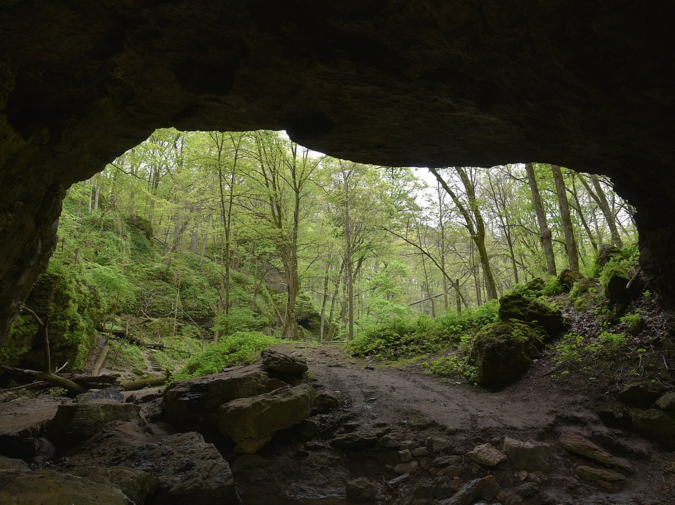 There is nothing, Lois says, gayer than spelunking.

Kaoli rolls her eyes as she smooths her hair back into a long, heavy ponytail. “Don’t tell my husband.”

It is a joke, but in some ways, Lois isn’t wrong: here we were, a group of women in cargo pants and loose canvas shirts standing in the gaping mouth of a cave, making our way in through narrower and narrower passages, running calloused hands against smooth walls—dripping, cool, and ancient. A group of women in the dark, holding onto one another as we make our way deeper.

We’re a good team: Sasha, with her uncanny sense of north and south; Lois pushing us to go longer, further; Kaoli, making sure we always have band-aids, snacks, and a few nips of whiskey just in case. I am the one who listens to the cave noises, pays attention to the skittering of a mouse, and the scrape of rubber soles on stone.

Our headlamps shine over rock formations. Our boots weather the damp as we trace new paths and shimmy through tight spaces. With my little-boy hips, I was built for this. Sasha has to turn sideways and squeeze to make her way through certain passages.

There are maps, of course; we are not the first explorers. But the caves are as alive as we are, and, more often than not, the maps must change. What was once an opening becomes a wall of gravel, impassable; what was once blocked opens onto the next room. Are we all the same way? Breathing, changing; a collection of open doors and closed passageways.

The men who came before us—100, 200 years ago—did not hesitate to put their mark on the landscape. We find steel beams and abandoned tools, an old lantern, the bones of a chicken dinner on a ledge. We move like ghosts in the darkness, leaving no trace. Or, no: the only trace that we leave is one you can’t see, the one we leave on each other.

Lois is the leader, so it is fitting that she is the one to raise the question. When will we stop this halfway game of dipping in and coming back up for air, these long weekend expeditions that end back at a half-paved parking lot. When we will go for good?

There is a silence, and I listen to the hush of the cave, under which I can almost hear our four hearts beating: today, today, today, today. Then Kaoli shakes her head, her thick hair like a horse’s tail.

I’m not ready, she says, and though Sasha nods along, I want to protest: how much longer?

Maybe we’re as ready as we’ll ever be—ready to leave behind the safety of packed lunches and sunlight on our necks, the car radio on the way home. We don’t discuss it again, but sometimes, when Lois is leading, I can see a hint of something in her eye, and I want to chase it.

Instead, Kaoli makes gorp—good ol’ raisins and peanuts, but different every time: good ol’ almonds or dried mango or chocolate chips. The longer we stay out, the stranger it tastes on my tongue—the more the labels on her bags begin to look like hieroglyphics. I hold a handful of pebbles in my hand and tilt them, watching the mica glitter in the low light of my headlamp. I can almost taste the sediment melting into my tongue, the bitter sharp of metal and the funk of dark-growing lichen, and the way the rock will clatter against my teeth. I don’t like to eat too much when we’re in the caves, but when we get back, we’ll all go out and I’ll fill myself with plenty of cold beer and cheesy fries. Once, Lois follows me into the bathroom and puts her hand in my pants, and a cave opens up inside of me.

A Beginner’s Guide to Cave Exploration states that, when practiced safely, spelunking is no more dangerous than any other outdoor pursuit. Statistically speaking, 28 times more fatal skiing accidents happen each year than people die as a result of caving.

But think of all the skiers who choose to fling themselves down mountains in the name of recreation. And think, then: how many spelunkers do you know? On a per capita basis, the aggregate is irrelevant.

I am the one who finds Lois, her eyes wild, her short hair thick with dark blood. The cave is quieter than I have ever heard it. Then, we find Kaoli and she starts to yell, calling for help. I look at her blankly; why couldn’t I do that? My mouth seems to have ossified—silent, frozen around a mouthful of invisible stones.

The paramedics come and Kaoli shows our license. Do I want to ride in the ambulance? No, I shake my head without meaning to. No, you go.

Sasha drives me home, takes my keys and unlocks the door, offers to make me some scrambled eggs, but I have figured out how to speak around the stones, send her away with a promise to text in the morning. The phone call comes only a few minutes later: Kaoli, from the hospital. Lois will be fine.

Lois will be fine, but she doesn’t come back to the caves, and though we meet for coffee, the four of us, it’s different above ground, as though the extra weight of the earth was some kind of atmosphere. Without stone walls around us, it’s harder to talk, move, and breathe. It’s like I’m a cave pretending to be a person.

A few months later, Lois moves to San Francisco. She takes up surfing, posing for wet-haired in photos taken at Ocean Beach.

Scientists who study caves—there must be a name for this—have estimated that 80% of underground networks have more than one egress. What that means: only 20% of caves have an ending. The rest are like the tangled chain, a dark necklace that twists and turns below the earth’s surface.

Scientists who study caves have estimated that 70% of the earth’s caves are underwater. What that means: I will live out my life in 30% unless I can learn a new way to breathe.

At night, I dream of a cave life for myself, a bedroom with stone walls and a four-poster of stalagmites. I dream of reaching my hands into the pockets of Lois’s cargo pants and pulling out pebbles. The only thing gayer than spelunking, I would tell Lois, is missing you.

I’ve been making solo expeditions. I don’t tell Sasha or Kaoli because I know they’ll insist on coming along—for safety, for old time’s sake. But I don’t want good ol’ dried mango. I don’t want to know which way is north.

Without the others, I move more quickly. I used to think the caves were quiet, but now, they echo with remembered sounds: footsteps, breath. Today, today, today. After six and a half hours I can sense Lois, just up ahead, around the next curve. If I can only catch up to her, I will tell her I’m ready now—ready to go deeper, ready to stay.

Maggie Cooper is a queer writer, reader, and trail mix enthusiast based in the Boston area. She is a graduate of the MFA program at the University of North Carolina Greensboro and the Clarion Writers' Workshop, and her fiction has appeared in The Rumpus, Ninth Letter, Inch, and elsewhere.