A Foil Grip: Lessons in Fencing & Other Indoor Sports 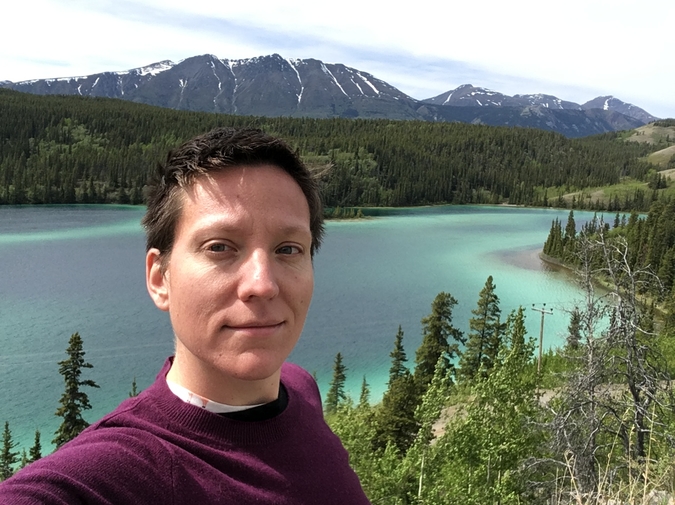 I was sixteen when I first wrapped my fingers around a foil grip in an attempt to get a woman’s attention. Fencing taught me patience: with more campers than weapons, we had to take turns. Then, because the sport blends history and Hollywood, fencing taught me to wait for her.

The fencing instructor was nineteen when we met; five-foot two and Jewish, with short brown hair that fell out of her ponytail, like mine did. She wore cargo shorts and oversized polo shirts, like I did. I showed up early and stayed late, driven by an urge I didn’t understand.

I learned to fence by mimicking her walk, clutching the foil the way she’d shown me by pressing her fingers around mine. In between classes, we talked. Or rather, she spoke while I memorized her middle name, her major, her hometown, the curve of her smile. If I could capture these details, I could summon the way her attention lit me from within in between lessons.

One day in August, she leaned in my ear. Her arm fell against mine. “You’re such a good helper,” she whispered. “All the campers love you. You’re their favorite.”

I stammered a thanks, then dissected her words with the passion of a future English major. I’d been immersed in my feelings, alternately thrilled and terrified at what they suggested. I’d never stopped to consider that she might be considering me, too.

That fall, I found a fencing school. Left-handedness gave me a natural advantage; we tended to confuse our opponents. I learned to keep distance, dancing with my opponent on the strip. If I moved backwards, they would move toward me and I could attack into their advance, catching them off guard much as my summer crush had surprised me.

The following summer, I returned to camp. The fencing instructor showed up for alumni weekend. We sat in the grass, inches apart; her nearness made me tingly everywhere. She pointed at a couple of female counselors as we made small talk. When she left, we hugged.

When I learned through the grapevine the other counselors were together, I replayed our conversation in my mind. She’d known they were gay and secretly dating. Her words were a feint, intended to provoke my reaction. I’d missed the opening. And I still couldn’t admit that I was—or might be—gay, too.

That fall, I regrouped. Her college had a fencing team and a strong English department. Since I was applying for colleges, I emailed her and arranged to visit. We met up on the quad, another camp friend in tow. We hugged hello. While grabbing lunch off-campus, she picked up my hand. “I love your ring,” she said, turning the band around my finger. Her touch lit a fuse. Timing hadn’t been on our side at camp, but now I could control the distance. I could come to her college. Come out as biseuxal if I meant having her.

The campers loved me. She loved my ring. Like Westley in The Princess Bride, she’d been telling me all along how she really felt and I’d only now figured it out. She’d be a senior when I got to college but we’d be on equal footing. We could start the relationship we’d always been meant to have. All I had to do was get in.

When I didn’t, I kept fencing. My college played hers, so I hoped for a reunion on the strip, but by then she’d quit the team. I fell asleep to thoughts of her and waited for summer camp, but she didn’t return. That summer, my last at camp, I taught fencing lessons.

Sophomore year, I met someone: a short Jewish sociology major from Long Island who inspired the same dizzy nausea as the fencing instructor. We went out for coffee. She asked if I liked the color purple. “The Color Purple?” I responded. “Sure.”

Our first kiss was proof that I’d been lying to myself since sixteen, if not forever. The fencing instructor wasn’t an exception; women made me feel things men never had.

By my mid-twenties, I’d returned to Boston. Clustered in a pack, my lesbian friends and I would go to the gay bar and stare at women like middle schoolers at a dance. There were plenty of women, but I didn’t want anyone the way I’d once longed for the fencing instructor.

I knew young people felt things more intensely because their hormones were surging and their brains were still developing, but it felt unfair that I’d missed out on the intensity of first love due to internalized homophobia. From the closet, I’d pined for the fencing instructor and longed for the day when I’d feel free to act on feelings that alternately shamed and thrilled me.

As a baby dyke, I’d waded into sex and romance like a kid at a water park, slowly and then all at once. Now I was on the sidelines.

I wanted the passion and intensity of early love. I wanted to find the fencing instructor. She’d been my bridge from denial to self-acceptance and coming out. Reconnecting could reawaken those feelings and show me that it was still possible at twenty-five to ache with romance. At the least, it could help me get over my ex.

I Googled her name but nothing came up. I Facebook-stalked other camp counselors, but they weren’t connected to her. She had no internet presence. Not on Facebook. Not anywhere! The three years between us put her on the other side of a digital divide. I put down my sword and moved on.

Years later, I wrote an essay about my slow coming out and the fencing instructor’s part in it. I could still recall her wide grin when I showed up to fencing lessons. I searched Facebook again, telling myself it was for journalistic integrity. This time, I found her. Her Facebook profile was private. The photo didn’t show her face, just long brown hair as she stooped to hug a little boy. It was the sort of photo women posted when they became mothers, as if to show their willing embrace of the selflessness motherhood requires.

I turned to Google, poring through pages of search results to piece together her path. She’d moved to Boston after college, too. She’d worked at a school for the blind, which was near my favorite bike path. She’d gotten a Masters in Social Work and had a therapy practice down the street from my old apartment.

Our lives had run on parallel tracks for years. I could’ve run into her at the park or the coffee shop, where I sometimes encountered other camp people. I would have recognized her instantly. She’d lost weight and grown out her hair, but her warm smile hadn’t changed.

There were more kids, three in all. There was a man, kind and a bit paunchy, dressed in khakis and a gingham shirt. He was a social worker too.

She’d been good with the campers, the youngest ones who sometimes wet their beds. She wasn’t self-conscious about getting caught up in their make-believe. That she would choose to have children didn’t surprise me, but that she’d end up with a man was inconceivable.

Okay, maybe she’d been bisexual or pansexual or had gone back to men; some lesbians did. But the way she’d known the truth of me felt too precise, too specific, too queer for a conventional marriage and three kids.

She had the starring role in the gay origin story I’d been telling for half my life. She saw who I was when I couldn’t see it; her words and her touch let me know it was okay. She taught me en garde and the sideways walk of an advance and how to recognize when an opening was presented. It stung to think I’d gotten it so wrong when our story felt integral to the person I’d become.

She’d shaped my life—my choice of college, my preferred sport, the women I was drawn to—but we’d met at an impressionable age, and I’d heard what I wanted to hear. My ring was only a ring. Her love was merely appreciation. Her intentions–I would never know them.

She may have taught me the basic rules of engagement, but I’d learned the rest on my own. I fenced throughout college. I came out at nineteen. And in the end, I found my way to true love. I married a nice Jewish girl. She has short brown hair, a sunny smile, and a Masters in Social Work. She doesn’t fence, but she knows how to throw a hatchet.

Lindsey Danis writes fiction and essays that center LGBTQ voices, honor LGBTQ history, and celebrate queer joy. Her essays have appeared in Condé Nast Traveler, AFAR, Fodor's, and Longreads, received a notable mention in Best American Travel Writing, and are forthcoming in anthologies including Nourishing Resistance: Stories of Food, Protest, and Mutual Aid and Riding Fences: Essays on Being LGBTQ+ in Rural Areas. When not writing, Lindsey is often found hiking or kayaking near her Hudson Valley home.