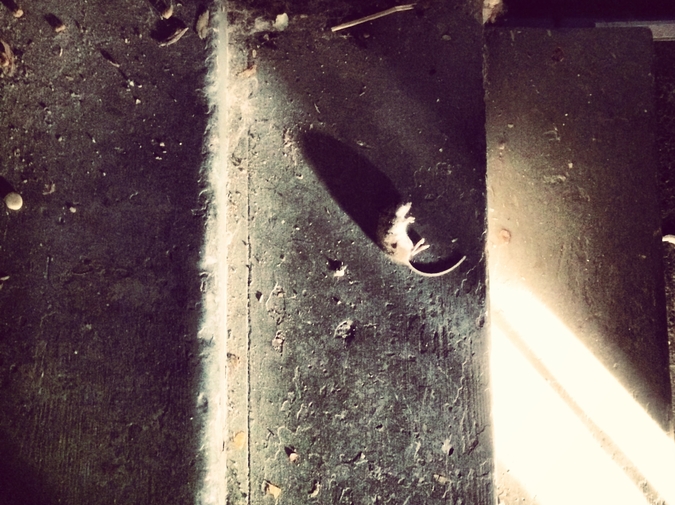 The gun dealer says a revolver is a better first gun. Lighter. Doesn’t jam. The revolver is short and squat, the cylinder bulging with bullets and the hammer protruding. You tell the man it looks like a seventies cop gun and you imagine yourself as an Angel. Brainy, beautiful, strong. But you didn’t come here to hold a revolver.

If you can’t hit someone in five shots, he says, you should run.

You can’t stop eyeing the 9mm Smith and Wesson. If you bring home an automatic, the gun dealer says, don’t leave it lying on the dresser, collecting dust and rusting. He tells you to practice. He says an automatic jams if you don’t lock your arms into place. Grip it with both hands. Steady yourself. He says Frank or John or some man at the firing range will steer you right on automatics. If that’s what you want.

He says your magazine will hold twelve, double what you need. If you can’t hit someone in twelve shots, he says, you should run.

Lori was my favorite aunt: the loudest person in the room, the toughest tomboy in the family, the only girl on my father’s side. She didn’t care if anyone thought she was a bitch. My mother used to tell me the sheriff came to the door looking for Lori when she was 18; she’d set some girl’s hair on fire because she felt betrayed. But that was before I was born, and I almost didn’t believe it.

As a child, I loved to watch Lori puff on her cigarettes, her skin tightening and puckering as she inhaled, while she waited for her curling iron to heat up. It was the only time she was quiet. Her hair hissed and singed, burning hotter than her cigarette, as she wrapped the strands around the barrel of her small curling iron. When she finished the last strand, Lori picked out the curls and used a heavy hand of hairspray to set her mullet.

How much I loved Lori. How many times I rode shotgun in Granny’s yellow banana Toyota station wagon to see Lori in South Carolina. Granny never said so many things as I chewed gum and she navigated the Appalachians, not about Lori’s life in Kentucky as a bootlegger in a dry county, not about Lori’s old job at a gas station, not about Lori’s ex-husband who used to run a laundromat during the day and beat her at night. She never said Lori had escaped Kentucky by moving to South Carolina, but I wonder now if Granny thought of it that way. Maybe Granny said nothing because I was too young, or because she preferred bragging to confessing as her favorite form of gossip.

The summer I was six, Lori took Granny and me to Lake Lure, North Carolina to see the Dirty Dancing set. I had seen Baby sashay across the Lake Lure footbridge in a skintight peach tank top and cropped shorts on HBO, and Lori knew I wanted to see the movie set in person. I remember little of the day except that Lori and Granny got along like they rarely did, and Lori snapped pics of me holding her infant son in my short arms. Standing next to the footbridge, wearing an ill-fitting plaid shirt, brown unlaced Eastland shoes, a red Kmart purse, and a home perm, I must’ve looked so harmless to Lori.

You realize a gun is meant to be shot, aimed at head or heart. You wonder if you could ever point a 9mm Smith and Wesson at someone, if you could pull the trigger.

You ask the gun dealer about the waiting period.

He says if you don’t have a record—and you don’t—there won’t be a problem. He doesn’t ask why you want the gun, or for whom. You’re afraid to tell the gun dealer you don’t really want the gun. You only want to hold it. You’re afraid he might pry the 9mm Smith and Wesson from your hands.

The year before I started college, Lori moved back to Kentucky for her husband’s job. That same year, my parents split slowly, hesitantly, unable to sever ties but unwilling to continue the same cycle of adultery and forgiveness. When my mother started sleeping on the couch, setting the oven timer as her alarm, I no longer wanted to be home. I picked a college clear across the state, closer to Lori than my parents. And Lori became a surrogate parent, taking me to lunch and letting me wash piles of laundry at her house, buying me bottles of Malibu rum, and advising me on boys.

For four and a half years of college, I drove past miles of farms, fields of cow patties and milky sweet corn taller than my head, on the way to Lori’s house, so many days and nights piling up in my memory that it’s hard to separate them. Lori would feed me meatloaf or hamburgers, and later, she’d drive me across the road in her four-wheeler to her neighbor’s “Country Club”—a wooden shack behind his house with an RC machine rigged to dispense beer and rows of broken riding lawnmowers for seats.

By then, I knew Lori was a hellcat, a former bootlegger, a forty-something woman still buying beer from other bootleggers or driving across the state line for emergency beer, passing mason jars of moonshine across the bonfire on her property, driving drunk on the back roads to Waffle House at two a.m. in her four-wheeler. I knew who she was, and I felt alive in her presence.

But how competitive Lori was at Monopoly and Phase 10, how much she liked to win. I thought we were only playing games, spending late nights at her house building hotels on Baltic Avenue or gathering two sets of three in our hands, but Lori often became furious when she didn’t win. I understand now that she always had to win: purses, phones, cars. Every last thing.

I don’t know if I’ll ever be sure why Lori pointed her gun at my head in my last year of graduate school. Maybe it’s my fault. In the almost three years since, I’ve made a list of petty concerns, small changes I should’ve paid attention to: Did I move too far away? Did I spend too few holidays with Lori? Was I a braggart when I said I might go to India for a free university trip, or when I told her about my study abroad in Greece? Was I uppity when I became a vegetarian? Did I buy a flashy leather purse, knowing that Lori would be jealous? Was I wrong to mention that I might get an iphone before Lori? Did I push too far, too fast, getting a master’s degree, knowing Granny dropped out of the eighth or ninth grade?

Lori had two cars, two trucks, several four-wheelers, a pool, and a five-bedroom house with her second husband. She hadn’t worked since she was in her twenties, but if she had, she’d have worked on an assembly line; her husband was a supervisor of a factory. Granny had worked for 50 cents an hour in a factory to support her four kids. I was a poor graduate student and I am a poor graduate student again and I have never been willing to work in a factory. Maybe I deserve nothing I have.

I only know that I still drove six hours in pitch-perfect black, through brakelights and bottlenecks in Atlanta and Chattanooga and Nashville, to be at Lori’s house for Thanksgiving every year I was in graduate school. I didn’t just come for mounds of Granny’s mashed potatoes boiled in bacon grease and scoops of Lori’s brown-sugar-pecan sweet potato casserole. I came to drink eggnog laced with bourbon with Lori and hide it from Granny. I came to honor who I was.

Maybe all these petty concerns, small moments I should’ve paid attention to, wouldn’t have amounted to anything if Lori hadn’t gotten a 9mm Smith and Wesson for Christmas two months before I turned thirty. But she did. When I walked into Granny’s house on Christmas Day, Lori aimed her 9mm Smith and Wesson at my head from across the room. She smiled as she lowered it. I said nothing, shocked but not surprised.

Every day after Christmas, I thought about running my fingers up and down the cold steel barrel of a 9mm Smith and Wesson. I didn’t want a gun. I only wanted to feel the weight of it, to understand why Lori pointed it at my head. I only wanted to know if she felt deadly.

Rebecca Hazelwood is a first year PhD English/Creative Writing student in Louisiana, land of drive-thru daiquiris and the worst drivers on earth. She is originally from Kentucky, where her extended family lives on the edge of Appalachia. Her work has previously appeared in PANK and Still: The Journal, and she is a co-creator of Structure and Style, a blog for/about poetry.