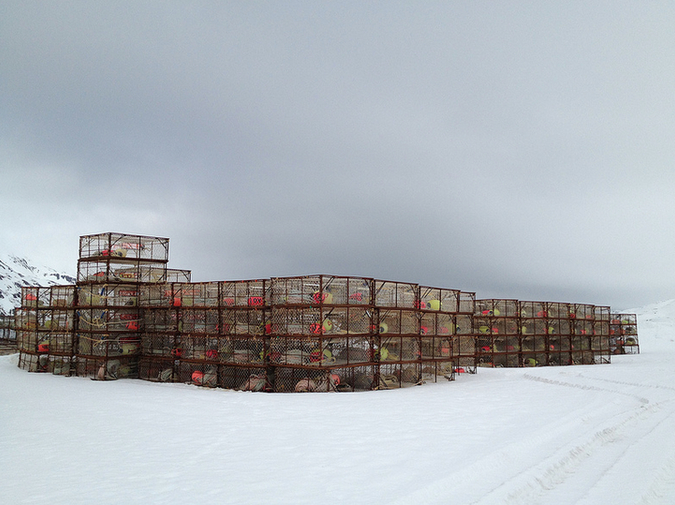 Stradal: Tell us about the nature of this book. Were you a ghostwriter? Co-writer? Interpreter of sorts? As a team, you did an excellent job of capturing Junior’s voice on the page.

Ruland: Thank you. Giving the Finger is an account of Scott’s adventures and struggles on the high seas and at home. Scott is open and engaging storyteller who was really easy to work with. My role as co-writer was to stay out of the way and let Scott’s voice come through.

Stradal: How did you come into this project? When did you finally meet Scott in person?

Ruland: I met Scott early on in the project. My agent and his representative brought us together and after talking on the phone we met in Hollywood when he was in town for the premier of Deadliest Catch season 7.

Stradal: How much time did you actually spend on a crab boat in the Bering Sea? What was the most embarrassing thing that happened to you on the boat?

Ruland: Embarrassing? Please. I am a veteran of the Navy, a boatswain’s mate who has braved monsoons on the South China Sea. The 48 hours I spent on the Seabrooke is the stuff of legend.

Stradal: How was your Navy experience useful? Coming onto a crab boat as a writer, did being a Navy man earn you any props, or were you treated like a greenhorn?

Ruland: It helped in that I knew port from starboard, forward from aft, but that’s about it. Junior is a fisherman who is the son of fisherman. I’m a sailor who is the son of a naval officer. Understanding that dynamic was the key to the story. Since I didn’t go fishing with the crew, there weren’t too many opportunities for them to mess with me, for which I’m very grateful.

Stradal: What was the weirdest thing you did in service of capturing this story?

Ruland: The seven hours I spent at a karaoke bar in the Aleutian Islands were pretty strange, but the weirdest thing that happened was coming down with vertigo while I was up in Walla Walla, Washington. I spent a day talking with Junior and went back to my motel after dinner. The following morning I got up to use the bathroom and fell flat on my face. The room was spinning and I felt like I was trapped in a nightmare. I had to call Junior and have him come take me to the emergency room. When he showed up I was doing my best to dry heave into a trashcan in a dignified manner. At the ER they gave me some meclizine, which is what they give you when you get seasick. So somehow I managed to get seasick just listening to Junior’s stories hundreds of miles from the ocean.

Stradal: Is heavy drinking and substance abuse more or less omnipresent in the fishing community than it seems?

Ruland: I think now that the fishing industry is more regulated it doesn’t happen as much. It wasn’t always this way, of course, and Junior has some colorful stories about the scrapes he got into when he was a young fisherman.

Stradal: The book seems to be written almost as a cautionary tale. In chasing this career, Campbell loses friends, body parts, and his family—more than once. While the TV show also captures a lot of this, was there a choice on your part to emphasize the less enticing aspects of Bering Sea fishing?

Ruland: The thing I most wanted to convey to the reader is that crab fishing is a wager that these guys make with their bodies. There are no salaries, no guarantees. Bad weather, faulty equipment, and dumb luck can conspire against a crew. I think a lot of people watch Deadliest Catch and think, “I could do that.” The book is a rebuttal of sorts. Yeah, you could, but you’d probably lose your ass – or worse.

Stradal: From your observation, what’s something that could change about Bering Sea fishing?

Ruland: The health of the fisheries, despite being monitored by the Alaska Department of Fish and Game, is always at risk. They reason all these guys are fishing the Bering Sea is because the stocks around Kodiak were depleted. If Fish and Game shut down the crab grounds, the fishermen will have to go somewhere else or look for a new line of work.

Stradal: The analogy made to Moby Dick on p.55 surprised me because Scott had previously asserted his firm aversion to reading. Is this an example of your voice coming in, and did you get free reign to express Scott’s story in your own fashion?

Ruland: I knew you’d bring that up. I brought the analogy into the story, but it came out of a conversation that Junior and I had. There were a few occasions when Scott would tell a story and I’d ask for clarifying details and if I wasn’t sure I understood what he was saying I’d compare it to another situation. That was one of those situations. The point I was trying to make is that the rules that govern the operation of a boat may seem strange or peculiar, but they come from a long and storied tradition that dates back several centuries.

Stradal: [Spoiler alert] Sections of the book tell the tragic story of deckhand Keith “Moose” Criner’s death at sea, of Scott’s rough childhood, and of Scott’s tumultuous relationship with his wife Lisa. Did you guys just decide to go for it and tell these tough stories early on, or did you work up to it? How did the book evolve during the writing process?

Ruland: I knew about the incident from the very beginning and I thought it would make a dramatic climax pretty much from day one. When I was a deck seaman, I was obsessed with going over the side. It’s hard not to be. I don’t want to say too much about the event, but it changed his life forever. If it was important to him, it was important to the story. Nothing was off limits. 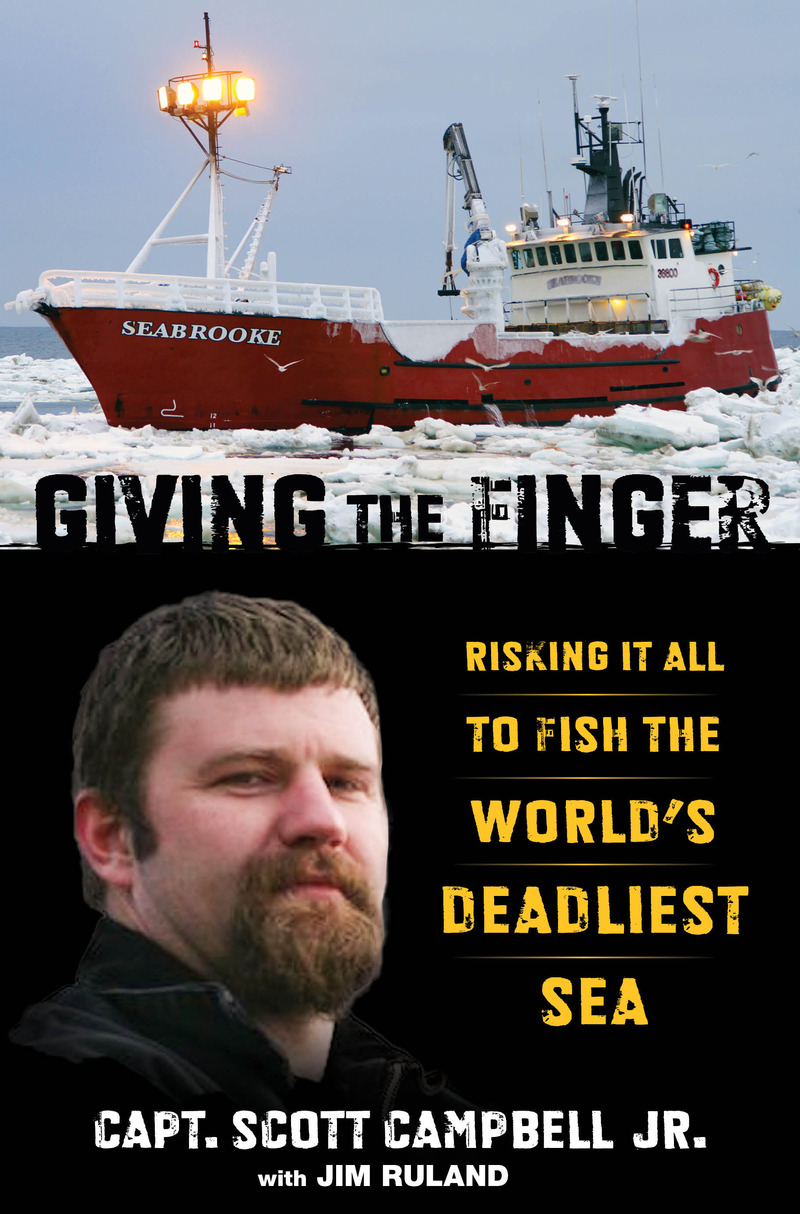 Stradal: Was there anything that you assumed or got wrong early on about Scott, the life of a fisherman, or working the Bering Sea that was disabused or corrected?

Ruland: This is going to sound bad, but the hardest thing was keeping track of all the times that he and his wife broke up, separated, divorced and re-married. It was a stormy relationship, especially early in Scott’s career.

Stradal: There’s a lot of historical context in this book—like the transition to the IFQ system—but it seems timely and in the service of Scott’s personal narrative. How would you say Giving the Finger is different from other books written about or by Bering Sea captains?

Ruland: It’s an actual story with a beginning, middle and end for one thing. It’s not a kitchen sink book with tons of trivia and facts that don’t add up to much. Fans of the show won’t have to wade through bunch of filler with stuff they already know, and those who come to story without having seen the show will pick up on the ins and outs of crab fishing along the way. Most readers find it to be a quick read and a compelling story. The author photos on the back flap aren’t bad either.

Stradal: After nearly two years researching and writing this book, what’s the first thing that comes to mind when I ask you what you learned from it all?

Ruland: I never want to be a crab fisherman. I worked my ass off when I was in the Navy, but it doesn’t come close to the hours these guys put in. That is not hyperbole.  Also, Alaska salmon season is in the summer. So if you’re eating salmon in the spring, it’s from last year.

J. Ryan Stradal worked as a story producer and senior story producer on seasons four and five of Deadliest Catch. A Minnesota native who now lives in Los Angeles, his writing has also appeared in The Rumpus, The Los Angeles Review of Books, The Rattling Wall, McSweeney's Internet Tendency, The Nervous Breakdown, Bright Wall / Dark Room, Joyland, Trop, and Midwestern Gothic, among other places.