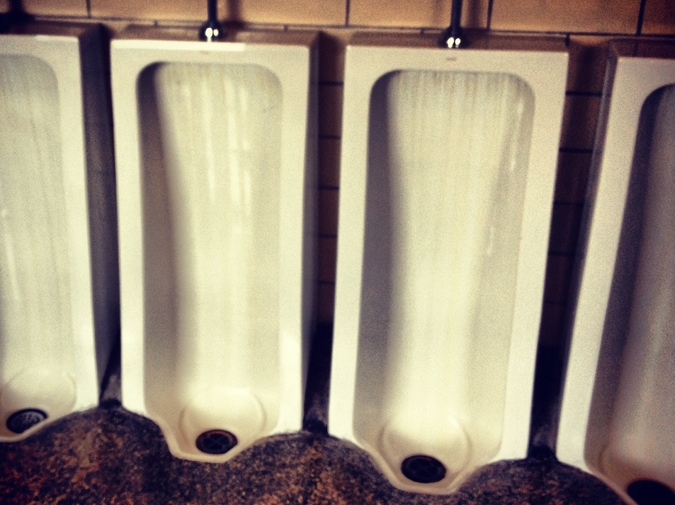 Dismissed from the Black Students Union meeting, for more or less actin’ like niggas, he and I ended up alone on the library steps. I bought a forty and surprised him with some weed I received at the restaurant where I worked, as a tip from an embarrassed patron who had nothing left to offer.

My man shocked me by pulling out dirty magazines with pictures of fat black women called Black Tail. He had had the mags concealed in an oversize manila envelope.

“Ain’t nobody a bigger freak than yo ass!”

As I continued flipping through the pages, he got all serious.

“That’s cool. What you gittin’ all funny about?”

“Everybody know you be creepin’, man.”

“It’s disrespectful to yo girl, man.”

“She’s a sista, man, a good sista. And you can’t be steppin’ out on her with no white girl!”

I shrugged, and he changed his tone.

“You still messin’ wit that Spanish girl too?” he asked softly.

I went off on ’im after that. “And ain’t nobody gonna tell me where to put my dick!”

I suddenly remembered the rapper Big Pun and started waving my hands in the air, like a true player for real: “I don’t discriminate / I regulate every shade of dat azz!”

“You know what? Some people who wouldn’t approve of this shit here. Black Tail, you kiddin’ me?”

He knew he had said something, so he rose.

I lit up the joint and shoved it at him after my puff-puff.

I was fighting mad because I felt humiliated. I wasn’t even fucking the white girl! There I was, defending myself for not doing something that I should have been doing, that any person in their right mind would’ve been doing, considering how fine that girl was, being punked by a Napoleon-sized pervert using ridiculous dirty pictures to try to cure me of a disease that I didn’t have, Jungle Fever!, and white girl that I liked was gittin’ done by some other dude, a smug racist cracka at that!

When it was my turn to puff-puff again, I huffed, puffed-puffed, and started wolfin’.

I had meant that he had “no idea” of how ridiculous I thought the whole situation was, and, to be honest, I was threatening him too. Anyway, that’s how he took it.

So he pounced on me.

For a second, it was funny having that lil motherfucker try to put me in some kind of wrestling hold, which he’d no doubt seen on those dumbass wrestling shows that he watched all the time. I giggled the whole time and, more importantly, did everything in my power not to drop the joint.

Sweatin’, huffin’, and puffin’, he repeated, “You crazy, man. Somebody need to kick yo black ass!”

Finally, after I decided not to slam his head into the concrete, we fell back and had a good one together.

“You more worried about the weed than me kickin yo ass!” he snapped.

“Puff-puff-pass. And shut up!” I snapped back.

He took a big hit, huff and puff, like I had before, and he started gagging afterward.

Eshu Bandele is currently an adjunct literature professor at the New School’s Eugene Lang College. He has two novels completed, and he is the author of three screenplays: World Enuf, Da Beast, and the Writer’s Digest award-winning Love is Crazy. Excerpts from his first novel, The Ape Is Dead!, have appeared in the Summer 2011 issue of Crescendo City and in great weather for MEDIA’s Fall 2012 anthology, It’s Animal but Merciful.  An excerpt from Scott Free is currently featured in Moonshot magazine’s “issue #5 “ritornello.” In addition, his short fiction if you leave a twenty and crackhead alone in your room, it’s your own damn fault! will be featured in Akashic Books’ THURSDAZE flash fiction series on Thursday, February 12, 2015. He lives in New York City.  His website address is eshubandele.com.