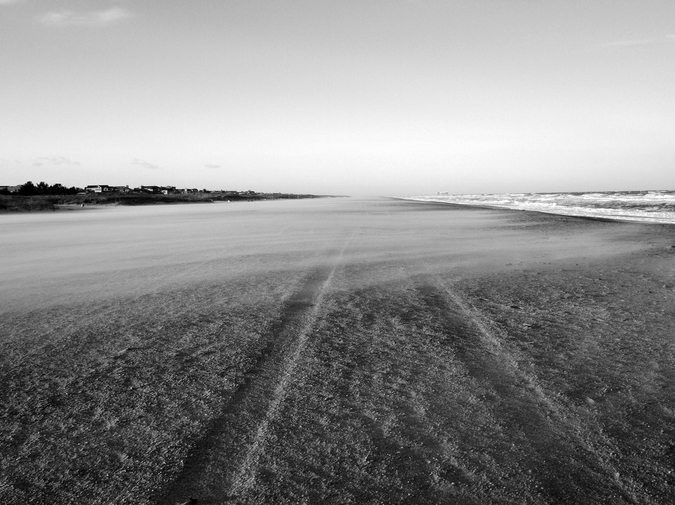 You notice you’re being followed. Headlights in the rearview mirror—though they all look the same, these seem somehow familiar, like a pair of eyes you’ve seen in a dream.

Can’t see the car. On this winding mountain road everything looks black and white. The pavement rising to meet you. It’s the only other car on the road and it’s been in the mirror for thirty miles at least.

How long? Well, how long have you been driving? It’s been in the mirror for nearly all that time.

You look at the fuel gauge and think you’ll have to stop soon, though you haven’t seen a station since you made that left turn: State Road XX, some name like that. Supposed to be a shortcut to I-80. That must’ve been around when you first noticed the lights in the mirror, but it’s possible they were there before that.

You can’t see the make or model—the car must be fifty yards back. At least the road is paved. You hold the radio in your right hand, trying to think of something to say, but it’s an open channel and a mysterious car following you through the night seems like exactly the sort of vehicle that would have a CB radio on board. You’ve been driving up into the mountains, manipulating the wheel with the left hand, holding the radio with the right, your mouth slack, stuck on the first word of your transmission.

Why so many lone drivers at night? Is this an unthinking question?

Finally, after tapping on the button a few times without compressing it, you go “Breaker breaker, this is Lapdog. Anybody out there? I feel like the last person on the planet.”

A voice comes back immediately, deep and murky, but the signal is quite clear.

Is it the full moon?

The car’s been quiet for so long, the new voice startles you. You find yourself speeding up.

Is it the full moon? The man on the radio repeats.

“Ten-two. This is Lapdog. Who am I speaking to?”

Maybe you are the last person on earth. Maybe you aren’t on earth at all. Maybe when you turned down that last country road you came someplace you never were supposed to come.

You glance out the window.

No moon. Not even stars.

“Stranger,” you say, “This is Lapdog. Looks like a new moon to me.”

Is it possible—keep in mind that you cannot see the other car, anything about it—is it possible that you’ve been going in circles? Or some kind of Mobius strip? Could the headlights you see be your own? Your mind has gotten loose on the road; you aren’t thinking clearly.

I read you Lapdog, comes a reply. Must be…some other reason people are acting insane.

“Ten-nine, repeat.” But before you give him a chance to reply you switch the radio off.

You toy with the idea of turning off your lights, disappearing into the dark but you worry about the windy mountain road, flying off some sudden ledge. It’s like all the lights have been sucked from the world, every light except for the high beams in the mirror and the two in front of your car.

You turn the radio back on. The voice is singing now, some kind of old shanty. The radio static giving the tune a creepy tilt, like you’ve accessed a transmission from the distant past.

Me and a cat named Banjo

On an old leaky rowboat

Suckin’ down the water

Suckin’ down the water

The voice is making up the tune as it goes, how it sounds to you.

You switch to a different channel, silence. The handset is in your lap, right hand fiddling with the frequency. You linger on the emergency band, have a sobering thought: this is not an emergency.

Back to the stranger’s band. He’s still singing.

Got the trucker’s jitters

Up to the next channel. “Breaker, breaker—Lapdog here. Anybody got their ears on? Anybody know where I can get some fuel? Or do I gotta wait for Eighty?”

You pull your foot slightly off the gas. Only the toe of your boot presses down. You hang the handset up. Minutes pass.

Is it the full moon? The voice confirms, by cadence and timbre, that he’s the same as before.

“How much per carton?”

Depends on what you look like. Who you are.

“How much for a person like me?” you ask.

No response. Eventually: I don’t know you stranger. How could I say.

Flash your lights, you whisper down your shirt, eyes stuck to the mirror. The lights flash for you.

You slam on the breaks, skid into a dirt lot on the side of the road, get out of the car. All this in one fluid motion. Turn and face the oncoming lights in the gathered dust. A car drives by, some car, its red tail lights rapidly receding down the road. From the open driver’s door, you can hear the stranger continuing to sing:

Find me bangin’ on the devil’s door

I don’t want to live my life no more

Andrew P. Heath is a writer living and working in Oakland, CA, though he has lived all over the country, coast to coast. His work is forthcoming in the Tahoma Literary Review, and has been published in 580 split, and various zines throughout the pacific northwest.