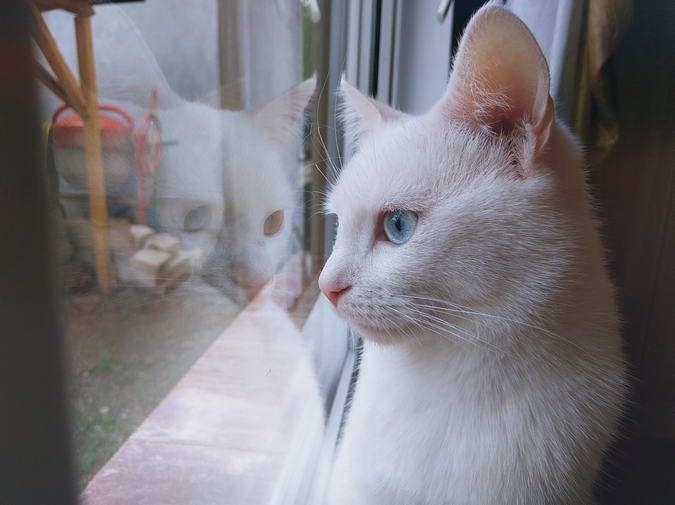 Dixie stood on his neighbors’ front porch, drunk and staring down at his bloody hands. He’d tried knocking with his foot for awhile but couldn’t keep his balance and nobody came when he hollered. He was winded after just a few minutes, his head feeling like a bobber on rough waters. Dixie leaned against the door, feeling the blood rush to one side before pounding it against the wood.

Frank had been hoping Dixie would go away. He’d been standing there, casting a shadow behind the blinds, not hurting anything, but when the knocking started, the cat had the good sense to hop down and head for the back. Frank wasn’t far behind.

Ralph is perched on the window unit. Beyond him is the ideal view of Dixie’s porch scattered with lawn chairs and coolers that doubled as lawn chairs and a set of tower speakers stacked under the bay window. Dixie didn’t work, so he drank and sat up all night with twenty-year old’s who’d yet to sober up enough to realize how sad it was for forty-year-old to live the way Dixie did. They blared Colt Ford and Jason Aldean into the darkness beyond the streetlights while they all laughed and talked about the good old days those kids were still living and Dixie was trying desperately to get back to. His pits would bark when the bass rattled the windows and he’d scream at them, all while every bit of it funneled through my window.

Frank turns to find Dixie standing in the door mouth, his eyes swelling and wild, looking more bowed up than a cripple coon.

Frank steps around Dixie, leading him back out the door.

“Why are you stopping?” Dixie asks.

“Cause I don’t want you bleeding in my house,” Frank says while stepping back inside the doorway.

“Wasn’t planning on it.”

“Dixie, you tied piece of bologna to my cat and let the dogs chase him. They are already going to chase him. He’s a cat and you are just making it worse. You could have come to my door with no hands and I wouldn’t have cared.”

“You called the police though. We’re even.”

“That’s cause it’s a cat and they thought it was funny too,” Dixie shrugs. “Wasn’t nobody gunna let your stupid cat get hurt, bud. He’s quick.”

“I don’t even let Ralph outside anymore, so I’m stuck in here with a cat that don’t know how to use the litterbox cause all your stupid ass dogs want to do is tree him.”

Dixie was unremarkable, to the point that his only reason for getting sober was to remember why he needed to drink in the first place, a point that Frank always had to keep in mind. There was no sense in arguing with him and in that moment, Frank just wanted him off his porch.

“What happened to your hands?”

Dixie held his mangled hands up to Frank, his fingers balling in towards his palms like a spider that’d been hit with a fly swatter. “Melanie broke this one with the door and I punched the wall with this one.”

He never made any inkling as to which hand suffered what, but Frank guessed that it didn’t matter. “Jesus Christ, man.”

“Do you need a ride to the hospital?”

Dixie turns, ignoring him, and starts wandering down into the yard, back towards his house.

Frank thinks about going back in but he’s already too invested. Besides, Melanie seemed to have her shit together, unlike the usual lot lizards who’d steal from him, young girls with daddy issues that’d leave him tied to the bed for days, or that carny girl with the squirrel’s nest wig, dark make up, and shower of shooting stars tattooed across her face. At least Melanie had a job.

The house smells like beer and tastes like cheap wine and the dogs start barking immediately. There is shit thrown everywhere, his futon up turned, and sure enough, a hole in the wall next to a clock with It’s Miller Time labeled where the numbers should be.

“You and Melanie do this?”

Dixie slings a pizza box off a poker table and pulls a sheet out from under it, cussing before tossing it back on the floor. He looks like he’s about to cry again when he starts waving one of those wrecked hands at me.

“I don’t have your number.”

“Shit.” He starts to pace the room, his palms on his temples. “It’s probably off, anyway.”

We search his bedroom which holds the bare minimum needed for male survival. I kick at the piles of clothes and food containers while he overturns everything like an addict who’d lost his next fix.

My foot gets caught in a balled-up towel in the bathroom and his phone comes skidding out. I holler for him and he bolts in, dropping to his knees to pick it up.

“Are you calling someone to come take care of you?” Frank asks.

“Hey, can you please come back and let’s talk about this?”

“No,” Dixie lets out a sigh. “She’s drunk too. She took five hundred out of the safe and went to Texas.”

Maybe Frank was wrong about her.

He’s using both hands to hold his phone. “Yeah, what makes you say that?”

Jesus, Frank mutters. “You sure you do need to go to the hospital?”

There is a quiet second that makes Frank regret asking because he sure didn’t want to spend his Sunday in the ER.

When he got back to his house, he locked the door.

Kyle Summerall is the author of Juke (Thuglit: Last Writes, 2016), as well as What Came Before (Good Works Review, 2018), What If We Were Strangers (What Would Elvis Think?) Mud Bottom (The Flash Fiction Magazine, 2016), Summerall lives on the Gulf Coast while his writing focuses more on central Mississippi where he's from. He hopes to follow in the foot falls of those who've also called the south home, like Larry Brown, Ron Rash, William Gay, David Joy, Barry Hannah, and Michael Farris Smith.