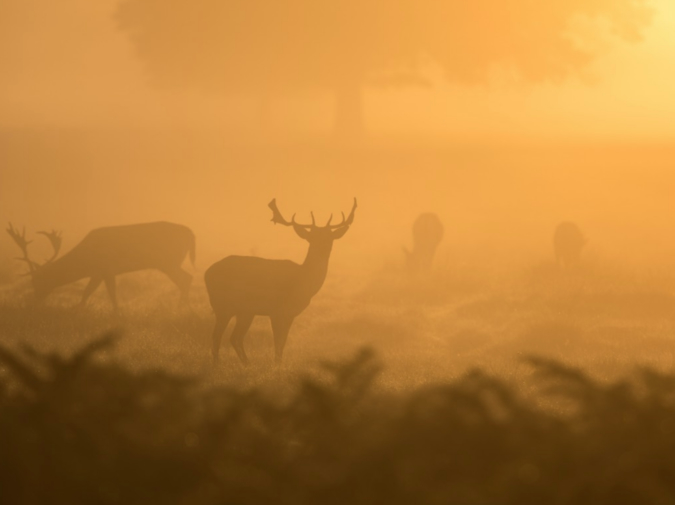 The sky was grapefruit, blood orange, and the dew lifted off the fields neighboring the highway like a lake with steam-fog. I drove in the fabric dinosaur costume he gave me years ago, messed up real good but doing not half bad. The horizon kept tumbling in on itself, origami folds where sunrise met tree line. I waited for the pines to catch fire, to burn the forest where the three winds meet. Do us in quick, I begged, do me easy. I couldn’t see well through the holes of my oversized, plush T-Rex mask. My breath collected in pockets near the jaw like lukewarm pee spots in dirty water; I reeked of cantaloupe gone rotten and the aftertaste of his tobacco still caught down my throat with the rest of him. The cassette tape skipped every few words of Dylan’s Freewheelin’ and I punched the fucking thing like I always do, leaving my knuckles blue-black like a common myrtle berry.

In his backyard the night before I sat in a beach chair with rubber strips, pale-colored and stale with age. The telephone lines rippled like sound waves. The air smelled of spoiled swamp fish, and I imagined my feet were stuck in slits of salmon belly. I kept telling him this: that my fish slippers would not come off, my heels too deep in stomach-guts. He laughed and laughed, taking drags of a cigarette.

I’ve missed you, he said. He put his forehead against my neck, smelled of sweet sawdust and another woman’s floral perfume, and I felt where he had fractured me everywhere.

I jerked my legs up and down, my feet melting into the moist insides of the salmon.

I still love you and I can’t anymore, I tried to tell him but the soured smell of something long dead had me gagging towards my ankles, looking the fish right in the eye.

I was at Bob’s Diner before seeing him, an easy stop off the main drag. The place was lit up in Christmas lights though it was July. I sat at the counter with a man older than my father and he complained that his glass was stuck to the surface because of the syrup, crystallized from age. We don’t have syrup here, the waitress kept saying in a stoic manner. I recognized her as the mortician from my grandmother’s funeral but she assured me she was not. The man older than my father kept filling the miniature jukebox with quarters and playing “In The Summertime” on repeat, and for the rest of the night every time I spoke I swore the words came out like Roger Miller’s scat singing. My tongue was twisted, tied tight, and corkscrewed.

What does that mean, the man older than my father asked when I said I’d been feeling recently as though there were holes in my vision, as though the world in front of me was wrinkled.

I didn’t explain any further. Instead I kept stabbing my straw into the ice at the bottom of my diner cup and sucking up nothing, a habit I never outgrew. The song started over again — “You can stretch right up and touch the sky” — and the man older than my father smiled with a sort of psychotic satisfaction, so I put my fingers in my ears like I did as a child. I don’t want your goddamn love Roger Miller; I’m lonely enough as it is, stop spitting on me.

Before the diner I had walked into a hoedown at what used to be an abandoned warehouse next to the railroad tracks. I stood against the wall and watched the couples twirl each other into nausea. I was a biased observer at these events, as they reminded me that my body only moves in three directions: forwards, backwards, and sometimes I take an overzealous header into whatever is beneath me.

Austin stood with me on the sidelines, an old high school lover, the type that suddenly has nice arms when it’s too late. He was trying to get rid of a turtle because the commitment was so overwhelming.

But he is nice, he said.

He held Sheldon on either side of his shell and showed him to me, as if looking at the turtle’s face would be reason enough, explanation enough.

I explained to him that I kept planting succulents and killing them again and again. The one that had died most recently made me cry because what’s anything worth anyways if my abilities sum up to being able to walk forwards, backwards, and sometimes downward because I am head-heavy.

Austin told me about the woman he was seeing and that he no longer wanted to see her anymore, though he loved her still.

They all are, he said, everyone I’ve ever loved.

He asked how I was doing and I told him I was dealing with a severe condition of backseat driver and I kept getting carsick. Someone came over to us and asked if they could pet the turtle.

Before the hoedown I sat in the chair at the salon, getting my haircut like I do every four weeks, throwing my money away to good looks, but I don’t think I’ve got them yet. They tell me I’m in danger of growing a mullet around week five, a threat that’s constantly lingering. Images of Billy Ray Cyrus flood my mind whenever I raise my head and feel the long strands tickle the back of my neck. Achey Breaky Heart, Jesus, kill the goddamn man.

I told my hairdresser I needed something stylish. Make me look like Jean Seberg, I said

A woman, hair done up in something awful, sat in the chair next to me reading an article titled “Five Eye-Opening Secrets Your Boyfriend Is Hiding From You.”

I hit a point in my mid-teens where I no longer trusted men to kill my spiders. That is when my skepticism was conceived.

You have a strong jawline, the woman searching for secrets told me. I took it as a compliment.

Thanks, I said. Yours too. It’s strong.

I was at the grocery store beforehand, pasty-faced by fluorescent lights, and even still, with all the passing of time, I found myself in the gluten free aisle shopping for him, thinking god I bet he’d like these buns, these must be new, and contemplating buying the rice-flour bread to leave on his doorstep with a note that says “thinking about you.”

Do you need help finding anything? a man in a green vest, face covered in acne, asked me.

Does it look like I need help? I said, grabbing every box from the shelf and throwing it into my cart with a sort of vigor I didn’t think I had in me.

I stood in the aisle with all of my soon-to-be purchases, watching the tiled floor come up on me from beneath as the ceiling slowly began to flatten. The grocery shoppers hissed an electrical noise and with each swallow I thought my uvula went down with it. John Hartford played over the intercom, the lyrics parroting back and forth in my head like a yoyo that can’t seem to stop getting momentum, dear god.

Excuse me ma’am, are you alright? You’re looking flushed, said the acne-man.

The cassette in the car was skipping entire verses and my knuckles were too swollen to punch it. I hit the power and drove in silence. My foot was numb on the pedal, bare and poking out from the leg of my dinosaur costume. The plush head trapped my breath as it settled clammy on my skin. It came fast, the deer. I saw its tail first, standing alongside the yellow line, looking for something in a field of nothing. How beautiful, I thought, in the early sunrise. Its body was small: fragile and lean. It walked with hesitancy down the line the way one does when intoxicated. The sun was finally above the stretch of trees, pale pink clouds spread wide across the sky. The fawn’s fur looked almost lavender.

Carling Berkhout is a writer and musician based out of Southern Vermont. Her work has appeared in Quail Bell Magazine, Porridge Magazine, Anti-Heroin Chic, and Fretboard Journal.