UFC 168 Will Bring Our Family Together 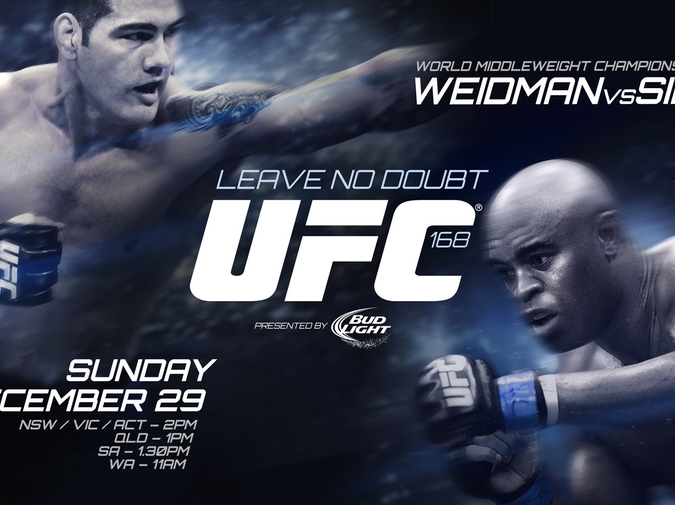 Mom. Dad. Where have you been? Everyone else is already here. You missed the first prelim bout. I'll catch you up: Siyar Bahadurzada won by tap out in the second due to rear-naked choke. What? No, ancient Greece has nothing to do with it, mom.

Well come on in, don't just stand there in the door—you're letting the cold in and Gammy's hogging the space heater. Mom, is that your famous heart of palm dip? Mmmm. You shouldn't have. Let me take that for you. There's Corn Nuts and Red Bull on the TV tray by the futon. Gammy brought the cheese ball. What's that, mom? Well, there's a bottle in the freezer but maybe you should eat something first.

Listen, before you two get settled, I just want to say how glad I am you decided in the end to come. It means a lot. I know we've sort of drifted apart since I moved out the last time, but having the family over and reconnecting has always been at the top of the to-do list. It's just that things have been so hectic. First there was that bogus lawsuit, then the wedding—mom don't start. We didn't invite her family either. I told you, it happened so fast and Velga was really self-conscious about her English. From what little I could make out, she wanted to keep it small. Anyways, there was the wedding, then the divorce, and suddenly here I am, thirty-six years old and still haven't had the family over.

So when I saw UFC 168 was coming up smack-dab between Christmas and New Years it was like bam! This would be perfect for—just a second. I hear Aunty Dot. What's that, Aunty Dot? No, the man on the TV said omoplata. OH-MO-PLAH-TAH! It's a type of shoulder lock. Turn up your hearing aid.

Where was I? Oh yeah. This just felt so right. Christmas is always at Gammy's, Thanksgiving's at your place and Uncle Roy does the Super Bowl. So, since the UFC always puts on a big year-end event, I thought why not make that my thing? You feeling okay, dad? You haven't said a word since you got here. The bathroom? Sure, it's over there in the living-slash-dining area. The latch on the door's broken. You have to kind of hold it shut with your foot. Anyways mom, I thought we could make the UFC my thing, you know? Oh, before I forget, your share of the pay-per-view comes to eleven bucks. You're covering Gammy.

What's that, Gammy? No, I was just telling mom how I couldn't wait to get my hands on that gorgeous cheese ball.

So, like I was saying, mom, the UFC could be my—what? Oh. Sure, we can talk later. You do look tired. Probably all that driving. Have a seat. There's plenty of room for one more on the bean bag next to the twins. You won't want to miss the analysts break down the next matchup. See the pissed-looking guy on the right? He really knows his MMA. Yes mom, it is the same gentleman who made people eat bugs for money. The bug thing was just to pay the bills. His real passion is cage fighting. Or maybe bawdy stand-up comedy. One of the two. But not the bugs, for sure. I think he's been trying to get out from under that. I don't judge him for it.

Oh, hi dad. What's wrong? The toilet? No, it always does that. Just lift the top off, reach in and jiggle the chain. There's a bar of soap in the shower and a towel by the stove if you want to wash up after.

Aunty Dot. Aunty Dot. AUNTY DOT! Could you get the twins to simmer down? Apparently my sister stepped out for some air and I'm trying to talk to dad. Yes Aunty Dot, I can see they're crying. Kids their age cry all the time. What? Of course I can see that man's arm is broken, but children these days aren't as sensitive as they were when you were young. They're probably crying because their blood sugar's low or something. Get them each a Red Bull.

So dad. Before you get all tied up with the toilet, hear me out. Like I was trying to tell mom, the UFC could be my—wow, dad...are those tears? It's okay, you don't have to hide it. I know it must be hard; you look away for a few years, look back and presto, you're little man's all grown up. Just let it out.