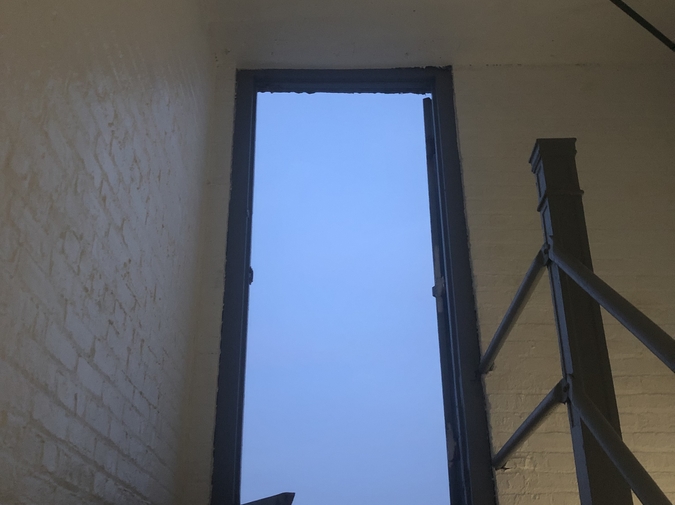 Now you’re in Prospect Park, wearing a halo of insects. Can the sun change its spots? Like how freckles are just skin damage rewritten as poetry. Then you’re a college radio DJ spinning “Boys of Summer” into “I’m Goin’ Down.” Milling through a botanic garden, smiling at every flower. All that yellow yelling hello.

Now you’re remembering a pregnant moment; a spoon from last August with someone who once read a Frank O’Hara poem to you out loud on the phone, while you sat in the dark on a couch that has since been removed from your home. A person you still dream about, maybe. But past seasons are past lives.

Now you’re learning in the museum, coming to terms with how ultramarine means from beyond the sea, the sole song that ever made you cry. Then you’re in the towering golden library, deep in a photo book, realizing you only ever see flamingos immobile. Though an image of something is not the thing itself.

Now you’re climbing the stairs into azure space. Then you’re on a roof in Williamsburg Brooklyn studying the whole tableau of the sunset evolving, admiring the parts where God took a highlighter to the horizon, snapping a shot of her taking a picture of it all; a tall, beautiful bite mark cut into too much cotton candy.

Now the celebrations are laughing their machine-gun stars in the fabric, zinging at you from all angles, one nation under competing fireworks displays. Then you’re sitting on the edge, petting a black and brown math equation. Two rotties; one barking, the other stoic; eighteen thousand Instagram followers.

Now there are children in cages to the south and the cop at the border said he liked your arrowhead T and everything everywhere is flags, and the sky is very patriotic, over-the-top with its three distinct colours, and in the presence of Americans you feel like a stingray’s skeleton, naked, brittle and fanned out.

Now another one goes off to the west, and a stranger hands you weed. This one ends with a dapple effect, drops of light sprinkling into the pond of the night. Then you’re thinking of the one man you’ve ever kissed, somewhere in Manhattan. Maybe watching his own version of the same mechanical explosions.

O search engine: What is a universal basic income? What does

full communism now mean, and does it fit with my aesthetic?

I saw a fat puppy on a leash on my way to a social setting.

Was it a good omen fit between reality's other puzzle pieces?

O search engine: What is identity? And who am I? The walls

of my apartment are white as bone. It’s a privilege to live

minimally, I saw someone say on the time line. Decluttering

is a luxury. Now here, let me arrange these flowers. Let me rotate

this vase so the light catches it a certain way for the gram. Every

thing is content. O search engine: What is a gilded cage? All I want

is a white marble countertop, a cracked teacup interstitched with gold,

a pithy canvas tote full of everything I feel. The sky has been so pale

and empty lately. Can you imagine anything bleaker than a white

person? Every one is discontent. If you read enough you realize

every search engine query is a prayer to a lidless god. Is nuclear

war exciting? How would you rate peak oil? How many people

have reviewed a wet bulb temperature of thirty five centigrade?

day evening picnic on the mountain; a bottle of white, a fresh baguette,

whatever’s left of the baba ganoush? Who will read the poetry we left

behind? Their black-and-white covers, their line breaks. O search engine:

Alex Manley is a Montreal/Tiohtià:ke-based poet whose writing has appeared in Powder Keg, Peach Mag, and the Academy of American Poets' Poem-a-Day feature, and whose debut poetry collection, We Are All Just Animals & Plants, was published by Metatron Press in 2016.