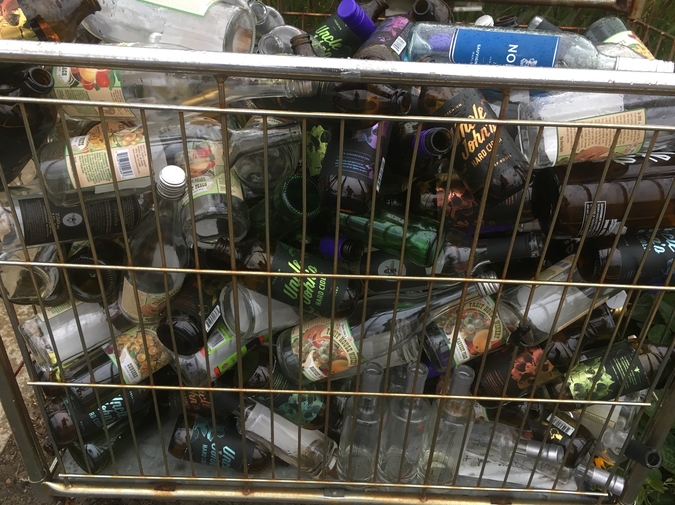 Jordan flicks the lighter on with a big roughened thumb. He waves the tepid flame around until it goes flat.

Nah, he says. Just making light of a shit situation.

Oh ho, says Mina, taking over three seats. Making light. You’re a punster, Jordy. She brushes my knee as she sprawls even farther and it’s all I can do not to yelp. Last night’s wax peeled off more than hair. No pain, no gain—Mina slapped her pink thighs like an athlete. I was proud of our silent winces, just as we’d borne our navel piercings in high school without a squeal. Mina going on to get her nose done, the nape of her neck, her tongue. They’re long gone now. The holes grow in.

At least we’re together, I say. Not trapped, like, with some crazy guy. Some murderer. We’re lucky.

Who says there’s no crazy guys here? Jordan crosses his eyes, smiling big and wild with his Jim Carrey underbite.

No murderers, says Mina, kicking him with her sandal, and Jordan opens his mouth again, considers whether the joke’s worth extending. Decides it’s not. Pats her foot. His breath still smells of weed.

I tell them my elevator story, how we jerked floor by floor from basement to penthouse, jabbing buttons helplessly. How the little Filipino boy said Mommy, I don’t want to die!

I say, this isn’t half as bad. At least we’re underground.

He waits for me to laugh, pick a side. He’s in Britt’s parents’ bathroom helping Mina gets her jeans on, puffed up with chivalry and lust. He’s thinking, remember how good it was to be in charge for once? I could have driven us forever, taking side streets to avoid the cops, Mina’s head out the window for the third time in one block. Her bumpy white back in the rear-view.

Yeah, but we’re adults now, there’s no pride in a driver’s license. We have not even brushed our teeth. Mina sticks her tongue out as though to prove the point, slides stupid-low across her seats, a Homer Simpson stance. If she were fat, if even she were my size, she could never get away with it: the uncombed hair, the bare feet on public property. She sees me thinking this, concedes. Indeed, life’s not fair. What do you want me to do about it?

I want sunlight, I say, splaying my hands across the filthy windows. I want thirty degrees and bees at my ankles. And one of those five-dollar ice cream sandwiches.

They’re six dollars now. Jordan’s scrolling through his phone, pulling up a picture. Craggy chocolate, a pool of black-flecked vanilla filling. You see? Check out the size of that thing. I bet it’s like twelve thousand calories.

Yeah, ‘cause you really care about calories.

Maybe he does. Mina looks solemn. You know one in ten eating disorder cases are for men. And that’s reported.

Ninety-eight percent of all statistics are made up, Jordan says around another popcorn twist.

I pull out my own phone, hoping for bars, finding, of course, No Service. No matter, there’s story enough here already, thousands of green bubbles tracing our slow drift. We opted for separate apartments. Why sully things with dishes and thermostats, grocery bills and laundry? Why not go out instead, squander paychecks on pints and poutine and keep our friendship suspended in the gaze of jealous strangers? Recall the taste of each other’s breath, midnight walks to 7-11 for Slurpees in the snow. Those hoodies we wore like monks’ robes, men’s size large with fraying thumbholes, washed only at parents’ insistence. The first time I saw Mina, she wrote my name in Wite-Out on our desk at the back of the math room. The smell of Wite-Out, gluey and potent. Jordan was a dentist’s kid with two-hundred dollar shoes. Hey Kanye! we called across the cafeteria, and because he grinned instead of glaring, we offered him a seat.

I thought I would be a doctor, says Jordan. He moves Mina’s leg with careful brusqueness, takes up the space with his own. One-up the old man. Pathetic.

Never too late, Mina sing-songs, which is worse than just agreeing.

No one tells kids real jobs, I say. It’s all Richard Scarry stuff. Doctor. Mailman. When I grow up, I want to be a business development assistant. I want to be a regional purchasing coordinator.

More fun playing doctor anyway, I say, and this sends both of them silent. The popcorn bag unfurls next to Jordan’s foot like some hardy urban plant he promptly kicks into submission. He’s sixteen again, yanking leaves off bushes as Mina rollerblades ahead of us. It was too cold out for those skimpy shorts but she’d nicked the camo jacket from his closet weeks before. A flash of prickled arm as he reached for the next branch. I almost smacked it down—Just take your coat back, dammit! But soon enough he was running, his big hand snatching Mina’s collar, the two of us laughing as she shrieked, a fistful of green down her back. We never meant for her to fall. But really, what did she expect?

I miss your piercings, Mina, I say.

Me too. Jordan brightens. You looked like a suicide girl. It was hot.

Spare me the hipster bullshit. She picks at her bloody cuticles. You want to be a doctor, be a doctor. You’re smart. You’re rich. You’re in your twenties, for god’s sakes, why do you act like your life is over?

The subway car lurches and we flail around more wildly than merited, relieved not to have to continue this thread. Already all three of us have our phones out and we trade sheepish looks.

Why don’t you take a video, Jordy, we don’t need internet for that. Mina’s back to her girly voice, the lip-biting way she talked around the guys at the party last night. Jordan, still smarting from this familiar blow, holds his phone in front of her boobs.

Sorry, he says, that’s not what you meant?

Ask him, he’s the expert.

We look out the window, phones flat on our laps like tired children. I think: I am the spineless one. Amorphous, amoebic, the glue between two pieces that were never meant to fit. All the pleading and comforting, all the agonized maneuvering over a border that won’t stay put. And imagine if they did get together: What then? Rinsed away like last night’s lube. Not that I would know.

That guy on the fire escape last night, trying to make an apple bong with a ballpoint pen. He was just on the verge of too old for that party, one of those tousled cool dad types everyone secretly pities. But when the pen exploded he swore in something throaty and old world, flicking his soiled fingers like he was casting a spell. The apple was dripping all over the stairs, it would look like a murder scene in the morning. I pictured fingerprints smeared on my thighs.

That’s some Snow White shit right there, I said. Then, in a rush of embarrassment: My friends have a pipe if you need one.

The subway car moves again, whole meters this time. We straighten in our seats. A collective loosening when it stops: Good, we won’t end on this note. Our eyes slide over each other’s feet like kids’ on the first day of school.

Forget it, I don’t want to anymore.

Cheese? I say. For a video?

Mozzarella, Jordan cedes, and switches the phone to mirror mode. Our faces a water color blur as his arm snakes over our shoulders. Bristle of pit hair at my neck, wet blot on soft cotton. I could pick this smell out of a lineup, no boyfriend’s musk could replace it.

It’s mooz-a-rella, you plebe, says Mina. Moo-za. Like a cow.

You’re like a cow. Jordan yelps as her fingernails dig into his knee. Already his face is shifting but he keeps the phone steady, turning it sideways so the three of us fit more cleanly into the frame.

I say, We should have taken a cab.

Cost you an arm and a leg, says Jordan, and Mina and I groan. We’re lumped together in last night’s taxi, on our way to the party. Mina reaching over Jordan’s lap to stroke my shin.

And of course he obeyed, he’s never said no to Mina in his life. The fluff of his wrist at my calf. Bollywood music ramping up—stupid kids, drown out whatever lurid nonsense—but Jordan can’t resist a dance tune, he moved to shimmy—

He jerked back down. Gave his arm a quick, assessing wiggle.

Don’t worry. He grunted with the helpless resolve of men the world over. Just like tearing a Band-Aid off.

But of course it wasn’t so simple. In the end Mina had to unglue us one hair at a time. The three of us laughing until our heads fizzed, racking up a fee so high we used up all our booze money. Spilling from the frigid cab like being born in reverse, the summer air snug as a womb, grass licking our ankles.

Who needs booze, said Mina, skipping ahead. Who needs parties.

Beneath us, the world rumbles, and we crane our heads for sunlight.

Justina Elias holds an MFA in fiction from the University of Guelph. Her writing has appeared in Room, The Puritan, Under the Gum Tree, and elsewhere.