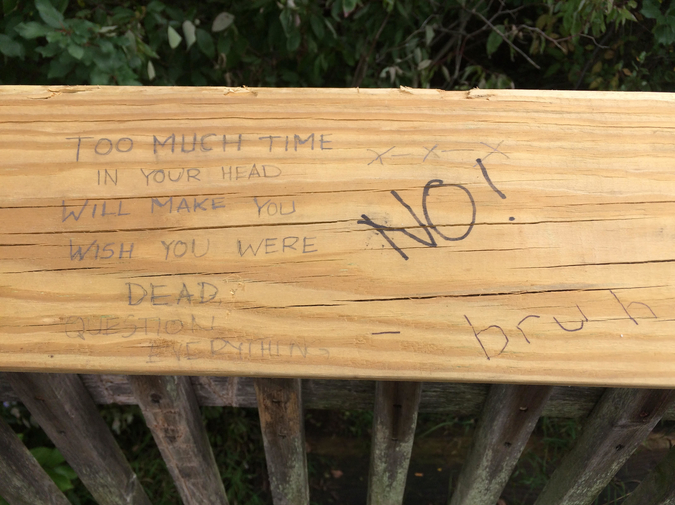 My students were never so captivated as when I held my hand, gun-shaped, against my head and mimed shooting myself. For once, I seemed relatable to those 17-year-old boys training to be auto technicians, whom I would one day pay to change the oil in my Subaru.

I sent a text to my father, telling him I saw three coyotes. My father is an admirer of the natural world. I sent another text about a nearby house that had been abandoned. I'd noticed the word “SATAN” scrawled across the front door with blue paint that morning. I said, “Do you think it’s a sign of the apocalypse?” My father is a conspiracy theorist. His favorite movie is Soylent Green. When I was little, we would reference the movie constantly, shouting, “Soylent Green is people!” as we stabbed the kale on our dinner plates.

He finally responded, “U been drinking?”

There had been a recent lapse in my mental health. He was taking me so seriously.

Then I texted “I'm serious,” and opened a bottle of wine.

After years of exploring adulthood: marriage and career, I needed a social life. I joined a book club. I reached out to old friends. I was happy to discover one friend, who knew me in my past life, still lived in town. We met up on my birthday and reminisced. In two weeks, she told me, she was moving to a monastery to become a Buddhist nun. She now goes by Rinnyi.

Shannon McLeod is the author of the essay chapbook PATHETIC (Etchings Press). Her writing has appeared in Necessary Fiction, Hobart, The Billfold, Cheap Pop, and Word Riot, among other publications. She teaches high school English in Southeast Michigan. You can find Shannon on twitter @OcqueocSAM or on her website at www.shannon-mcleod.com.