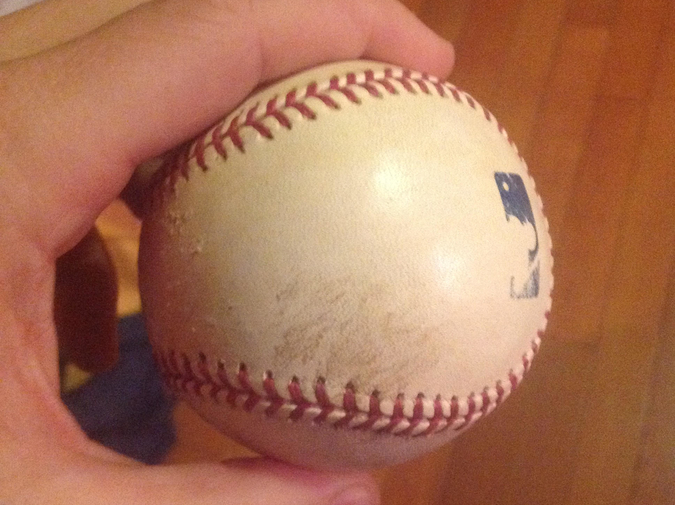 I’ve never been closer. I am in the last row of Shea Stadium’s field level thanks to a cousin’s access to corporate box tickets. My infrequent trips to Flushing as a kid were spent exclusively in the most upper reaches of Shea’s titanic topmost level and now I’m sitting just to the first base side of home plate. I am as close to the action as I can get without a uniform. Said action is a game involving the 2004 Mets which would appear as dull dishwater on TV but at this proximity the players are a thousand feet tall and the grass is greener than an Irish Spring ad and it is all nothing but magic.

Bottom of the fourth. Mike Piazza strides to the plate. He is not the Piazza of old to be sure but he is still an impressive figure as he takes his time approaching the batter’s box. He swings at the first pitch with the power of a thousand suns and hits it a mile high over the protective screen behind home plate. The ball arcs in a tight parabola and I soon realize its trajectory will bring it right to me. As a kid I brought a glove with me to every game hopeful I would have a chance to catch a foul ball even as I sat at upper deck heights that would scare off Sherpas. I never came with in a mile of a foul ball and now one is ticketed for my lap. Every atom in my body bursts with joy.

Except: Because I am no longer 10 years old I have not brought a glove with me to this game. Also: By virtue of being hit by Mike Piazza this foul pop is traveling at a fantastic rate of speed. I don’t know what else to do but cup my hands and hold them before me as if I was awaiting a shake from an open bag of M&Ms and not a baseball falling at terminal velocity.

As the ball hurtles toward earth it bends back every finger on my left hand. Any faster and it would have gone through them. The ball caroms off the concrete floor beneath my feet, pinballs against the undercarriage of my seat, and rolls through a tiny space between the field and loge levels that opens out into the concession area. It is gone.

I look through the gap that claimed the ball. The exact nanosecond it rolls out of the stands a dozen fans run down the ramp into the concession area in a mad dash to find the souvenir that wounded and eluded me. One sprints straight into a men’s bathroom directly in back of my seat.

I trudge down the ramp like a condemned man. My bruised and swelling fingers demand that I make some kind of effort to find this ball even though I don’t hold out much hope of succeeding. But once I am in the concession area with its soggy grill-smoke air I notice a clue that escaped the notice of the other souvenir seekers. In the area immediately beneath my seat sits a garbage can.

This garbage can would be familiar to any New York City subway rider. It is enormous and covered in innumerable layers of goopy pockmarked black paint and it is filled with four innings’ worth of discarded beer cups and ketchup-soaked cardboard trays and half-eaten hot dogs that have been fermenting in 90 degree heat. The smell billowing from the opening at the top is almost visible.

I quickly perform two mental calculations in succession. The first estimates the probability that Piazza’s foul ball rolled into the garbage can at better than 0 percent. The second calculates how much dignity I can afford to lose in pursuit of this ball. I draw the conclusion that dispensing whatever dignity I may possess at this point in my life is a small price to retrieve this memento.

And so I take a leap of faith into a baptismal fount of trash. The can is so large I have to tilt it on an angle to loop an arm through the opening. I cannot see its contents because they are buried deep inside and enveloped by a black hole of stench. The can weighs roughly 9000 pounds and soon wears a divot into my sternum as I struggle to keep it at a 45 degree angle and also keep it from crushing me.

I wind my arm through the can in a circular motion with the back of my hand facing outward and skirt past anything that doesn’t feel like a baseball. Most things in the can do not feel like anything but half soggy sponges and wadded used coffee filters.

Before long other fans slow their travels through the concession area to stop and stare. I tell each of them THERE’S A BALL IN HERE in a breathless bleat. My thought is this will satisfy their curiosity and they will move on. Instead this explanation only prompts more passers by to glare at me with a combination of wonder and incredulity.

I have been to many games at Shea Stadium and I know that this facility’s bar for unacceptable behavior is extremely low. I have seen a blind drunk mook take a header down a flight of stairs and draw no one’s attention but mine. I have seen gangs of cops and fireman (not in uniform but declaring their allegiances) fistfight their way down the exit ramps and go unnoticed.

And yet here I am rooting around in garbage for a foul ball that almost broke my hand and I am drawing a crowd. I concede that dumpster diving was far more entertaining than the Art Howe-era Mets. The throng gathering to watch me includes several roving vendors. These people must keep moving throughout the park selling beer and hot dogs or else they will make no money this afternoon. But they are taking precious time from their schedules to gawk at my dumpster dive.

One vendor keeps a running commentary of how stupid I am to dig through garbage. “I work here man,” he says. “You know what kinda shit goes in them cans? You don’t even wanna know man.” He shouts these lines to me and then shares them with his fellow vendors in case they didn’t grasp the gist of his argument the first time.

With a crowd cheering and heckling me in equal measure I make another calculation. The ball was traveling quite fast when it rolled away from me. The ball is much heavier than mushy french fries and souvenir Mr. Met cups. Ergo: The ball must be at the very bottom of this can. My arms are not long enough to reach the bottom of this can. But I pull up the garbage bag inside the can and bring the bottom to me.

Meanwhile the vendor who won’t shut up has hit a real streak. “You give up now and maybe you won’t stink so bad,” he says.

I pull up the bag with my left hand and grasp for the bottom with my right and as the bottom gets close enough to touch I feel something round and stitched.

“Give up man,” the vendor says. “You're gonna dig in that nasty shit forever and you ain't gonna find shit.”

The second these words leave his lips I grab the ball with my right hand and pull it out of the can spraying soda and mustard everywhere and hold it over my head like it’s the decapitated head of my enemy. The entire crowd who gathered to watch me gasps OH SHIT in unison. I have never succeeded so decisively before and I suspect I never will again but in this moment I feel like a god. Even if I am a deity who was just elbow deep in other people’s lunch.

Once I have scrubbed up in the bathroom and stored the Piazza foul ball in the safest pocket of my cargo shorts I ask a field level usher if there’s any chance the man himself might sign it. The median age for Shea ushers is 70 and they tend to have a jaundiced view of life.

This usher is no exception and he snorts when I pose the question. “Piazza don’t do that kinda shit,” he says. It’s just as well. At least I won’t have to tell the greatest slugger in Mets history to sign beneath the ketchup stains.

Matthew Callan is the author of the novel Hang A Crooked Number and a former writer for the Mets blog Amazin' Avenue. His short fiction has appeared in the Newtown Literary Journal and Nimrod International Journal, and his essays have appeared at Baseball Prospectus, The Classical, The Awl, and the Onion AV Club.