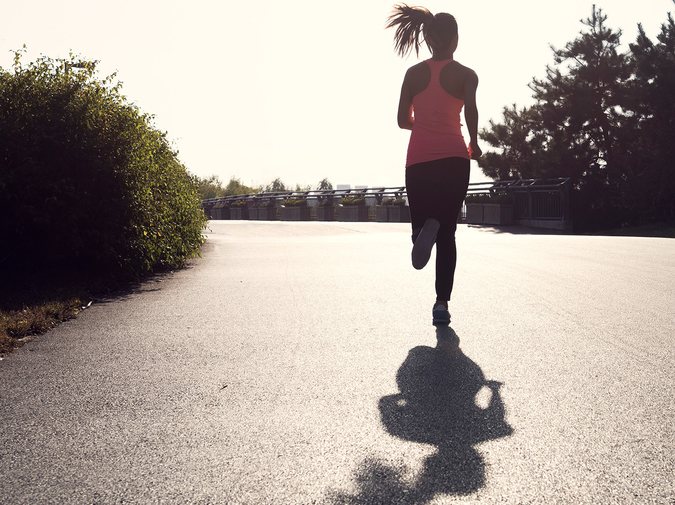 In order to make my appointment on time, I need to pass the woman in the WATERBOARD HER t-shirt. You’d think she would have retired such a garment (if worthy of that title) after that November, but here it is—hot pink with white lettering, neckline aptly darkened with sweat, cap sleeves neatly tailored to cradle the owner’s deltoids. She leans against the concrete facade of the post office, pulls out her earbuds and taps off the stopwatch on her smartphone screen, tries to catch her breath as WATERBOARD pulses with the gentle rise and fall of her chest. The shirt has served its purpose and she’s taking it on runs now.

This woman can’t be much older than me. She is blonde with a ponytail and terrycloth headband that collects sweat from her forehead. She has muscular arms with hands that look like they could sucker punch the patriarchy. She wears yoga pants exploding with lime and purple fireworks.

I could cross the street to the opposite side to avoid her, walk up a block, and loop back around to get to the office. I could approach her and say what an interesting shirt! I could casually suggest that she read a book from time to time. I could ask if she’s involved in some kind of dare. I could feign asking directions. I could walk by her like she doesn’t exist.

I could ask if she ever bullied someone as a kid, if she’s poured vinegar in another girl’s orange juice, if she’s thrown salt on a slug in the dumpster, if she’s walked down the hallway with her brother’s hair in between her fingers, banging his head against the walls with each step. I could ask if the pain she inflicted on others helped evaporate her own, if the daily pain experienced by those unlike herself makes her feel light.

I could ask what she got on her SATs, how she likes to eat her eggs. I could ask if she sets one alarm in the morning or sets one to sound every ten minutes an hour before she has to be up. I can ask what she watches on Youtube, Netflix, if she thinks it’s funny to see people fall down.

I have coffee in my cup. I could toss the hot liquid on her and rush through the revolving door to my appointment, make her the slug. I could then walk calmly into my therapist’s office and ask his stone face why are we all so bad? But I fear that in doing this, I’ll never figure out exactly what she’s running from.

Noelle Rose is from Connecticut, and received an MFA in Writing from The School of the Art Institute of Chicago, where she was awarded a Graduate Fellowship. Her first chapbook, 'Floor Plan,' was recently published with Dancing Girl Press and can be purchased at dancinggirlpress.com. She lives and works in Chicago.