The First Rule is: Don't Speak 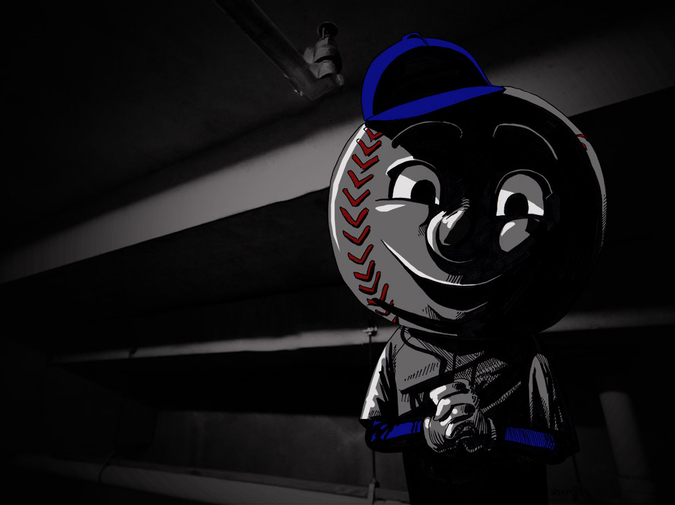 Nobody could be quite certain where it started, but Mr. Met was the first anyone noticed. One of the Citi Field clubhouse attendants--Jimmy Phelfas, from Hoboken, according to the Daily News--was in the park late, picking up used towels that the ballplayers had thrown any old place, instead of into the big cloth hamper like they were supposed to, they never, ever learned--anyway, Jimmy Phelfas was there after everyone else had gone home, ferreting into all the corners after dirty laundry, when he stumbled into a room with Mr. Met in it.

This might not have been so odd, in and of itself, because the Mr. Met suit lived in the stadium, with its own special room and everything. But this wasn't that room. And Mr. Met was occupied--meaning, there was a guy in the suit, the body filled out and the head on the body, instead of in its specially-made box, and the guy was doing something. He was sitting on a low stool, and he was rubbing his hands, his big puffy Mr. Met gloves, against the sides of his giant Mr. Met baseball head. He had some kind of dirt on his hands, which he was working into the dense plush.

These must have been the assumptions that Jimmy was making, anyway. About the guy.

For the guy to still be in the suit this late, with almost everyone else long gone home, was odd. Jimmy didn't know the guy or his schedule or anything, but he had a general idea of mascot hours, just from being around the ballpark so much, because he really did love baseball, that was why he'd taken the job in the first place, he loved baseball so much that he was almost always willing to work extra hours and to do things like pick up the sweaty leavings of the team without even any gloves unless he thought to bring his own from home--this all reported by the Daily News in almost gleeful detail--this specific late post-game hour was not a time when the mascot suit would normally be occupied.

And there was never a time when Mr. Met was supposed to be rubbing rich brown dirt into his head. Mr. Met's head was a pristine white. Mr. Met could only be spot-cleaned with a special cleaning solution, which was a real pain in the ass for the clubhouse attendants.

So when he saw Mr. Met suited up and rubbing dirt into his head--messing up his uniform gloves too, in the process--Jimmy got bold and stepped right on in and spoke up. Told him to knock it off right away. Right away, buddy, or he'd call their boss and there'd be hell to pay, you'd better believe it.

Mr. Met turned to look at him. He didn't say anything, which Jimmy might not have thought to question, because Mr. Met normally didn't speak, no more than any other professional mascot ever did. Just turned and smiled that sharp, black void of a smile.

They found all this out from the clubhouse security cameras. The Daily News probably filled in a lot of the more personal, sensational details on their own. After the fact, as it were.

The horrific thing wasn't what happened to Jimmy, 'though you'd think it would be. The horrific thing came after, when security came running and they got Mr. Met in a corner and someone held back his big gloved mitts and someone else went to get the head off, and the head wouldn't come. Off, that is. In fact there wasn't any kind of division where you'd expect it, just that white short-pile plush going down into the jersey, with Mets in script across the front and two big blocky zeroes right under.

Baseballs are rubbed in dirt before they're ready for use in a game. This is just a fact.

With the resulting media frenzy in New York, it almost went unremarked when a high fly ball hit one of the roof rafters in Toronto and knocked down a small bundle of ripped up programs. Stadium workers went to investigate and found a huge nest, nearly the diameter of the pitcher's mound. Inside was a beautiful, pale greenish egg, speckled with dark gray.

An ornithologist was found and retained. He puzzled over the egg, which was the size of an ostrich egg, or thereabouts. But an ostrich would never build its nest up off the ground--and whoever heard of an ostrich running wild in Toronto? The color was all wrong, too: ostrich eggs are whitish. This was more like, well. A blue jay's egg. But much too large. Much too large.

All this was in the first and only official report the ornithologist submitted to the team, even though the they had contracted for a follow-up report, meant to contain his professional recommendations on how to proceed with environmentally sound nest removal practices.

Blue jays are very territorial birds. They are particularly touchy about their nests. This is just a fact of nature.

In Boston, something lurked in a tall green wall, eyes glowing, its outline rippling, uncertain, like a badly remembered nightmare. A sleek phocine body slid into the water of San Francisco bay. A groundskeeper was found gored to death on the field in Colorado, three puncture wounds clear through his torso. The newspapers refused to even report on what happened in Philadelphia, although some garbled versions of the events managed to make their way onto the internet.

And in Detroit, Paws lifted his muzzle from his post-game meal. The white fur of his chin was stained. His mouth opened, and everyone in the clubhouse froze--with fear, certainly, they could all agree on that later, the ones who were around later--but also with a kind of terrible breathless anticipation, waiting to see if there was, would be--could be--a roar.

Samara Pearlstein is an artist with a BFA from the University of Michigan and an MFA from the School of the Museum of Fine Arts, Boston/Tufts University. She draws, teaches art in Boston, writes/cartoons about the Detroit Tigers at Roar of the Tigers, and tweets at@RoarTigers. She would like to one day meet the Phillie Phanatic (she has already encountered Mr. Met).