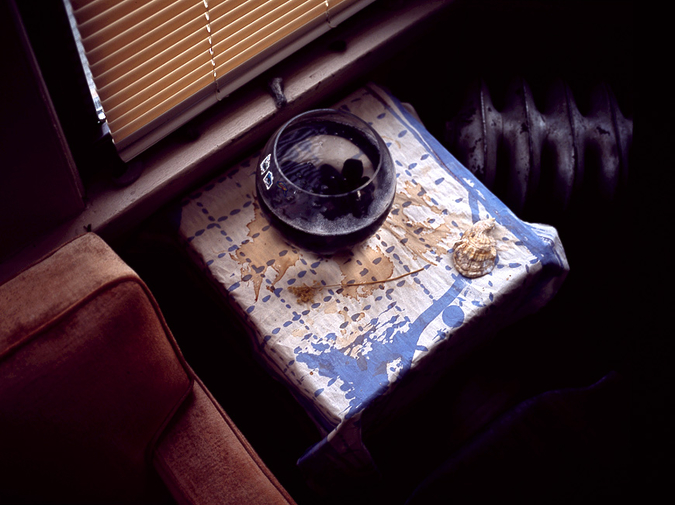 Ivan told me that the minute you step off the plane in America they hand you money. I keep waiting for someone to hand me money. No one has handed me money.

The subway entrance is a tiled hole with a black iron railing with steps leading into the ground. Not nearly as grand as in Almaty, this entryway into the city’s intestines, but far busier.

As I descend the air becomes hotter and hotter. The man in the booth at the bottom of the stairs is sweating. I fan myself with the letter Ivan has given me. Everyone is sweating down here. Sweating and waiting.

“Does this subway go to Brooklyn?” an older woman with a purple feather brooch asks me. She has an accent where certain consonants sprinkle their sentences like powdered sugar. I nod and the woman gives me a half smile as if unsure she should ask someone else or trust me.

Trains rush by. They each have numbers or letters and are stuffed with passengers. Travelers trapped in these dark tunnels. I watch their eyes, noses, mouths all speed by, difference given to movement.

One snowy day, Ivan showed me a picture of his ex-girlfriend who moved to America, coming so close that his utility belt bumped my ribs, his breath smelling faintly of cucumber and canned fish. He showed me a yellowed picture of a woman, a woman posing near the window of Saks Fifth Avenue and another of her standing next to a cream-colored Porsche. She had blonde hair and her black roots showed like soil under potted daisies.

“Halina is very rich now,” Ivan said. “She tells my mother that she makes hundreds of thousands, but she cannot send it here because our government will steal it.”

Ivan always kept Halina’s photo in his top jacket pocket. On the inside. On the right side of his chest, in a huge green wool jacket that hung down to his knees and hid the tops of his shiny black boots.

“Everyone has money in America,” Ivan told me one night as I was stirring two huge pots of soup for New Years breakfast. Pieces of sweet-smelling horse-meat surfaced only to be sunk in the whirlpool made by my spoon. He peeled an onion then chewed on the skin. “Halina has five fur coats and, I think, three cars, and a television in every room.” Then he would whistle through his front teeth. “We loved each other until we lost our boy.”

Now, I get off at my subway stop and head toward the house number on the letter that I have been fanning myself with. There is a billboard on the subway for cosmetic surgery. It reads, “Be Who You’ve Always Wanted To Be.” The streets are filled with black men huddled around cars, black children chasing each other, black women laughing about black men.

The minute I get out off the subway, I light a cigarette. Ivan smoked and would give me three hand-rolled cigarettes a day. He would lean against the grate and light his cigarette with his lima bean-shaped mittens, the flame flashing under his black hat. I am flicking the flint, but my lighter doesn’t work. People are pouring around me like water over a toothbrush. A man in a business suit stops, reaches into his pocket, pulls out a gold lighter, a lighter so hypnotizing that it drowns out the grayness of the cloudy sky and the gray pillars of steel and glass and concrete rising above or sinking below… and he lights my cigarette. I forget to thank him because I’m so surprised.

I begin to walk again. Smoking. There is a mattress lying on the curb. There are tags still attached and its threads shine. I remember how, once in winter, when the snow had crusted the foothills of the Alatau, Ivan came to my door, put a single finger to his lips, and handed me a blanket with bloodstains.

Brooklyn reminds me of home, in a way. Everything here works and there are far more cars, but the buildings where people live are barely holding their own against the city’s forces. There are bars on the windows, chains and locks around everything, and a film of dirt that reminds you that the air you breath is shared by many.

Soon, I am on Halina’s steps. I knock on the door before I realize that there is a series of buzzers. I search the scribbled names and see Burden, Franklin, Leahy. I press the white button grayed by many different fingers over time. Then I wait, feeling exposed, watching the black people milling around, so free in their emotions.

There is no answer.

There is a buzzing sound. I press against the door and it swings open. The entryway is dark, narrow, confining, and I instantly feel more comfortable. I push open a second set of doors and ascend up cement steps. Inside the doors on the first floor I hear a television and on the second floor a blender and nothing on the third floor, but I am still thinking about how many people are in this place… How many people, so close to each other, live here and never have to talk to one another because in America they do not need each other…

Halina is waiting for me on the fourth floor, peering down the steps. Her hair is a deep red, which is not like the picture of her standing in front of Saks Fifth Avenue. Her posture is very straight and her eyes are black like the candied Iranian figs that Ivan would bring me on my birthday.

“Please come in,” she says in English.

We shake hands and I walk through a narrow doorway, following her slender figure. It opens up into a wide living room where there is very little furniture, a fraying rug and a white and black spotted cat on the windowsill. There are lots of plants hanging near three tall windows, which are in the shape of coffins.

The kitchen opens into the living room and a pot of soup is cooking and I can see lentils rolling over one another and steam rising into an overhead vent. There is a book in Polish on the scratched table and a gray-haired man on the television talking about Guiliani and traffic jams and street vendors.

I tell her my name, but she does not seem interested. Just before I sit, I hand Halina the letter that I have been fanning myself with on the hot subway. She takes it, reads her name aloud and, with her index finger, slides her pink colored nail under the seam. The paper rips easily. She removes the letter and begins to read, her lips mouthing the Russian words. I was educated in Kazakh, Tajik, and English. The only Russian I know is from what I learned from television. I wait and stare at the cat that is staring at the black people on the street who are staring at everyone who pass.

When Halina finishes reading, she looks at me with wet eyes. I ask her what is in the letter and she tells me that Ivan has cancer. The doctors will not help Ivan unless there is money up front. Then she is quiet for some time.

“Do you like it here?” she asks with such suddenness and doubt that I stumble for words.

“What are you going to do now?” she says distractedly, pouring herself a glass of Armenian cognac. She does not offer any to me.

She smiles and sips her cognac. Her eyes never leave her glass. Halina does not ask me what kind of work because she knows a Tajik arriving to America for the first time can not have real work.

Eventually, she gets up and walks out of the room. I wonder where she is going. She is gone for nearly ten minutes. I think I hear her crying, but I cannot be sure. I watch the cat fall asleep. A clock in the hallway begins to chime. It reminds me of the church outside my apartment window in Almaty. Every morning I awoke to the clear pitches of each bell.

“Here,” Halina says, emerging from the hallway. She approaches and drops four clipped one hundred dollar bills into my lap. “That money is not enough to treat Ivan.”

I look at the four hundred dollars in my lap and then set it on the table. It feels as if an air-bag is bursting inside my chest. After everything Ivan did for me, I cannot take his money. I tell myself that while four-hundred dollars is not enough for betrayal, Halina will not send the money to him, that she has never him sent money, that his hope was her and her hope is that I will go away. The only hope there has ever been is a passing of pretense.

I quickly stand and say I must go, that I have an appointment. But, the truth is, I don’t have an appointment. The sun is coming in through the old glass windows, the black people outside are being very loud. Still sitting, Halina grabs my arm with one hand. Her nails are the same color my sister used to paint her nails, a deep velvet red. In the other hand, Halina has the four-hundred dollars. She holds the money out for me again and in her eyes I see Ivan’s eyes, the same eyes that seemed to come alive when he talked about how in America, they handed you money the moment you stepped off the plane.

Erik Raschke lives in Amsterdam with his family. You can see more of his writing at www.erikraschke.com