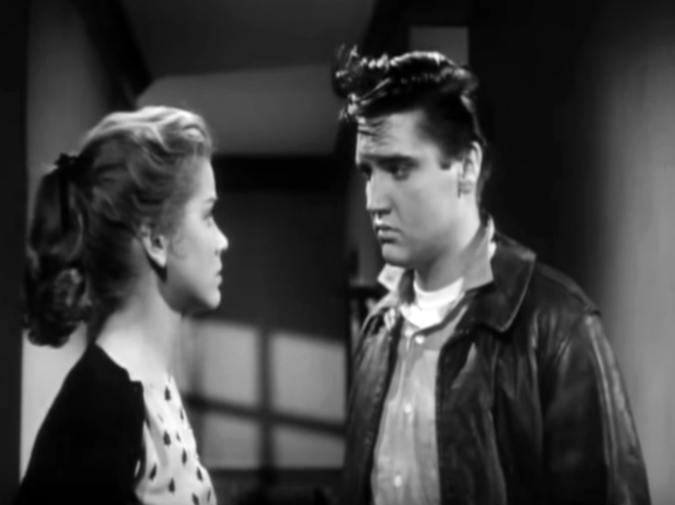 I’m a strictly heads-down girl at the gym, eyes diverted, earbuds in. Maybe I’ll watch my form in the mirror while I’m doing bicep curls — I always lift at least fifteen-pound dumbbells, because my main goal is to out-butch all the other women. When I’m done lifting, I jog a sloppy mile on the treadmill, stretch my legs out while pretending to watch the TV, and fill my water at the cooler with all the other bros.

By this I mean: it wasn’t my fault we started talking. It was your typical meet-cute, except instead of bumping into each other and spilling an armful of papers, I dropped a free weight on his foot. After he stopped screaming he asked me out. I must admit his quick recovery impressed me. It turned out we had the same taste in movies — strictly horror — and there was a director’s cut of The Exorcist showing at the indie theater downtown. I said sure. He picked me up at eight in a dusty black Dodge Challenger, wearing an old leather jacket with the collar turned up to the bottom of his earlobes. There were crumpled receipts and Starbucks cups on the floor. I asked him if he loved coffee, and he said no, strictly refreshers and blended beverages. He told me then, right out, that he was a vampire, and that — like all vampires — his objective in dealing with humans like me was to consume them or curse them with eternal life. Then he said he was strapped and I’d have to pay for our movie tickets.

But the thing is: he had this smile. Bright, shiny, big-enough-but-not-too-big teeth lined by full-but-not-too-full lips. And he had this thick, blond hair. And this broad back. And these muscular legs.  His eyes were entrancing. He put his arm around my shoulder and I leaned my head on his chest, sniffing his leather jacket. When we got to the part where the girl spiderwalks backward down the staircase, we both burst into laughter.

It was one of those things where I didn’t want to tell my friends about him. I knew what they would say: they’re all the same, you know he won’t change, he’s a vampire, for fuck’s sake. And, well, maybe I’m wired for bad love, I would say. Why not embrace self-acceptance? True strength comes from within, they would say, and I would sigh and acknowledge their wisdom while knowing I would do it anyway.

I didn’t see him at the gym again for days. I listened to throwback jams and did those hip-trust things on a mat on the floor. I rocked my pelvis in time with the beat and when old men passed by I smiled at them and thought: pervert. Finally he showed up again, talked to me briefly, and then disappeared into the shadows of the cycling room. I thought we’d had a great time. I texted a friend, who told me she was getting tired of my shit. He’s supposed to want me! I wrote. Here I am, living, breathing!

At the drugstore, I bought an eight-dollar bottle of body spray that smelled like sea salt and cherries. I hoped it would make him thirsty the next time he walked by. It worked. While I was on the elliptical, he came over, smoothed back his hair, and invited me to his place to watch The Shining on Saturday night. He told me to bring beer and ingredients to make nachos. Then he asked me to spot him a few bucks for one of the power bars they sold at the front desk. I only had a ten, so I gave it to him. I stared at his ass as he walked away.

When we got to the part where Jack Nicholson busts through the door to the bathroom with a hatchet, I told him I was immune to fear. That I’d worked so long at it I didn’t even respond to threats anymore. That I could kill giant spiders without flinching. That a mob of men with hatchets could show up at my door, and I would tell myself they were just neighbors who’d had a few too many while out chopping firewood. My vampire snuggled me and breathed down my neck.

You know how the rest of the story goes: we watched a few more movies. I bought him a new leather jacket. He tormented me by telling me stories about his ex-girlfriends and then stood me up at my birthday party. I cried and texted my friends. I texted him and waited for him to respond. Finally, he didn’t. I kept my head down at the gym, my earbuds in. I lifted fifteen-pound dumbbells.

I out-butched all the other women.

Emily Howorth has fiction forthcoming in Carve Magazine and has published stories in Boulevard, Washington Square Review, PANK, Midwestern Gothic, The Southeast Review, and other journals. She was a W. Morgan and Lou Claire Rose Fellow at Texas State University and currently lives in Oxford, Miss.