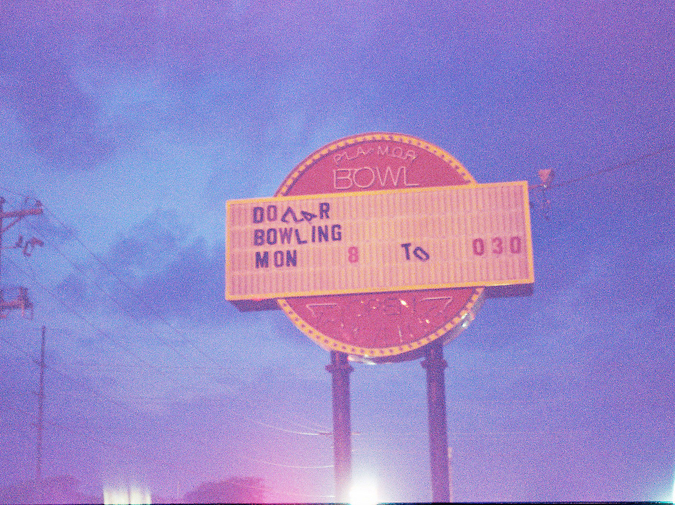 The deal that sent me from Texas to Ohio was brokered behind my back. Dad had torn his bicep at WrestleFest in March, and he was in a pain-pills stupor when we got the phone call about my mom. He was in the same stupor for the funeral. Larry Buffo, a.k.a. West Texas Wild Man, who was my Dad’s tag team partner in the eighties and my school teacher when we were on the road, he drove us down from Fort Worth to Houston for the services.

Larry’s truck had a racy mural airbrushed on the tailgate that wasn’t funeral appropriate, so we took Dad’s Bronco. Dad slept in the backseat in his suit, and Larry played what I guess he thought of as his grief mixtape—country songs and power ballads about dudes made sad by women.

Larry didn’t try to talk to me, but whenever the silence got too thick, he would squeeze my knee or knead my shoulder. I was pretty fucked up on cold medicine, and it felt like he was grabbing a hold of my bones. I imagined a giant blade extending from the passenger door like the wing of god itself, cutting down the windmills and fences and billboards and everything we passed.

Graveside were several Texas wrestling luminaries, dudes too tan and huge and hairy to be wearing suits, a couple gone-to-seed women from my mom’s ring-girl days, and the skeleton crew of my dad’s entourage. My grandma had come alone and brought her luggage. She was sitting in a folding chair playing solitaire on her lap. When my dad introduced us, she stood, pulled my hand out of my pocket, and shook it. I was twice her size.

“It’s nice to meet you, Tycho,” she said. She talked slow and loud, like I was a savage she was trying to convert. “I’m your mother’s mother.”

It was July in Texas, so everybody was sweating behind their sunglasses.

Every summer in Texas I had crazy allergies, sneezing till my stomach was sore.  While Dad was recovering from his injury, I’d learned by accident that if I ate six Tylenol Cold and Sinus pills at once, thirty minutes later I would be floating through the world like a ghost, walking without moving my legs. I would bump into shit and knock things over, but my body felt helium-light. If I ate twelve, the whole package, my joints would tingle and every time I yawned I would lose feeling in my limbs and a wave of electric numbness would wash over me with the consistency of olive oil. I got to where I enjoyed the mild hallucinations, neon clots of bacteria raining across my screen. The pills made it take forever to jerk off, but when I came it was like being fucking baptized. This I also learned by accident. For the funeral, I’d taken sixteen and I don’t think I blinked the whole time.

During the talking, I glared so hard at the picture of my mom that her bangs fell off. They lay there on the ground while we waited for the preacher to hurry up and get to the ashes and dust part. The wrestlers and the ladies tried to pretend they weren’t staring at me as I spilled over my chair. How come Sweet Dave Valentine’s son is so fat? Why’s he so big and doughy when his dad is the perfect specimen of man? I couldn’t blame them. Fourteen and nearly six feet tall, but in the places my dad was lean and hard and tan, I was obese and pale. I was strong, but it didn’t show.

Back when I was still in real school, before Dad took me on the road with him, I got invited to a birthday party by some kid whose parents made him invite the whole grade. It was a swimming party, and when I took my shirt off, a girl asked what happened to me. She meant what were those things that looked like scars wrapped around my sides where my belly lumped over my swimsuit waistband. What kind of accident had I been in? She wasn’t trying to be rude.

Later, I thought up all kinds of shit I could’ve told her. The truth was weirder—that they weren’t there and then one day they were. And maybe one day they would go away.

After the preacher finished and everybody shook my hand or hugged me, I was told to wait on a bench dedicated to a guy named Steve who was probably buried nearby. The cemetary was dotted with weeping willows like sulking Muppets. In the parking lot, yellow smoke tufted from both sides of the Bronco. I could only see my grandma, smoking in the passenger seat, but not my dad. He liked to argue from a reclined position. I bent my head back against the bench and looked at the cemetery trees upside down. Three weeks later, I was sitting behind my grandma’s flea market booth in Columbus, listening to her explain why she didn’t take checks or money orders for her merchandise. She asked me how tall I was and if I was strong, if I considered myself to be a tough guy, because she could use one of those.

Tyler Sones is an MFA candidate at Ohio State University, where he serves as fiction editor for The Journal. His work has appeared in Washington Square Review, Pacifica, Barely South, and elsewhere.