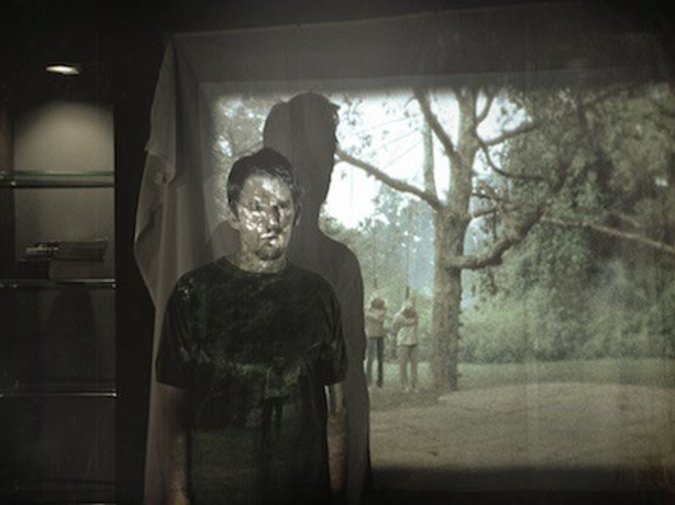 I literally can’t even warn you about what it feels like to see Sinister, other than that it makes you feel like you’re watching a real murder. At the beginning of the film it had the makings of a traditionally average, jumpy-scary but not that great, horror movie, and I almost completely wrote it off after the first ten minutes. I mean, the dialogue could have used some work if we’re being honest. However, soon after that I found myself watching a Super 8 film reel of the horribly graphic serial murders of several families. The movie follows crime writer, Ellison Oswalt (Ethan Hawke) and his family as they move into the house where a family was murdered and one of the children was abducted, and never found, so he could investigate everything that the police might have missed. On move in day, he happens to stumble across a box in the attic with several film reels along with (conveniently!) an accompanying projector. (I should add that I had recently watched Dead Poets Society for the first time, and it was strange to see Ethan Hawke in such a different role after watching him be the preppy, boarding school boy. But hey, versatility is never a bad thing.)

Although I did feel kind of strange while watching it, scary movies don’t normally get to me, so it was a pleasant surprise actually. The old film used for the murder tapes made it look extremely real, and I found it hard to watch at times. But, in retrospect, knowing that the movie could make it seem that intense and real is pretty awesome. Also, the way normal scenes were shot added to the suspenseful, panicky feel of the movie. The camera would cut between different angles rapidly during the times when Oswalt was having his most intense moments of discovery and horror, making me feel a lot more into it than I would have been, because there was so much to look at and keep up with. It did happen to be slightly predictable - the foreshadowing was nowhere near as subtle as it needed to be - but the creepy factor definitely overshadowed that completely.

One thing that I was glad this movie didn’t do was overanalyze or explain what was happening for the last twenty minutes of the film, when they could be having some crazy shit happening. Enough was explained to figure it out and be like “what the fuck”, but they also had a gruesomely wonderful couple of end scenes to go with it, so it wasn’t all stuck in the main character realizing what’s happening. I also liked how this movie didn’t slide down into the ditch of “defeating the forces of evil” for the ending, as so many do. It didn’t lose any momentum in the ending. If you’re a fan of horror movies, then this is definitely one you can’t miss. It might feel a little fucked up, but it’s pretty great that somebody’s out there that can still make a crazy scary movie. >:D