My First Pair of Converse 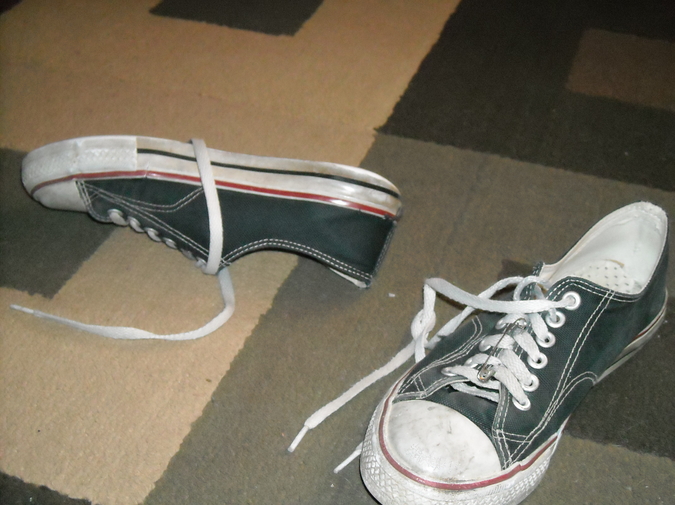 My first pair of Converse sneakers weren’t actually Converse at all. They were a knock-off brand called Emergency Exit, buried at the bottom of a stack of clearance shoes at Target. They were boys’ size fours, which meant they were too small to fit a real fourteen-year-old boy but might fit a fourteen-year-old girl who would wear a six the rest of her life.

Mom didn’t want me to get a pair of Converse. Apparently, they weren’t good for my feet. They would make me flat-footed. As a girl constantly questioned about playing sports (to make me more social), and told she was a natural athlete (and was wasting her abilities), I was looking forward to ruining my chances of being able to run or march anywhere.

All of my heroes at the time wore Converse. Until I wrenched those knock-off black and red beauties from the bargain bin, I had no other way of connecting to the leggy punk rockers who spent their days trudging through New York City, Oakland, or London in those canvas shoes that looked so good on them. I was too afraid to wear eyeliner like Billie Joe Armstrong. I’d tried it before with disastrous, messy results. The first time I cut holes in my jeans like Dee Dee Ramone my mother went ballistic. I couldn’t shave my hair into that beautiful mohawk like Combat Rock-era Joe Strummer because my grandma would cry and I was also afraid the shape of my skull would freak me out. But I wanted to be punk, goddammit. I wanted to connect with people who told me ugly truths and made me feel better about myself. I wanted to be cooler, prettier (in my own way), and self-confident. So I spent twenty dollars of babysitting money for those shoes.

They were so cheap the laces in the right shoe started to fray immediately, so I stuck a safety pin in them to hold them together and to my delight, it worked. I wore them all four years of high school. They turned a lovely disgusting shade of grey. Still, the effect they had was enough for me to keep them functional, glue them when the soles started to break off the heels, and ignore friends when they asked when I was going to buy new shoes. These knock off Converse were the armor that protected me from self-doubt. They were totems that linked me to the people I admired most. I looked down at them and saw my feet planted in the cobbled streets of Camden Town, a rainbow oil puddle in Queens, a sun-drenched orange slice of concrete on Gilman Street.

They were on my feet when I went to the infant ICU to visit my youngest niece, Paige, for the first time. She’d inhaled amniotic fluid and had trouble breathing shortly after birth. Before I saw her, I had to wash my hands thoroughly, for five minutes. I remember tapping my foot against the side of the stainless steel sink to keep my knees from knocking. I had to feel nothing as I walked into that room, surrounded by the stricken faces of parents holding their preemies in mounds of blankets, sitting in old rocking chairs. I stared at my feet, thinking of Billie Joe’s kohl-rimmed eyes, Debbie Harry’s radiant look in the Heart of Glass video, and Joe Strummer’s quick, goofy laugh in the middle of (White Man) In Hammersmith Palais.

My niece was a beautiful yet very small newborn. Her button nose was barely visible over the pacifier in her mouth and the breathing tubes in her nostrils. I couldn’t hold her, so I put my hand through a hole in the plastic box and touched her little belly. She was very much warm and alive, with a strong heartbeat I could feel under my fingers. I had cried so much before visiting her, worried she was close to dying. I stayed in my room and all I did was listen to music until I decided I wanted to see her and my sister at the hospital. And right then, with her heartbeat thumping, looking into her wide blue eyes following me as I moved, I knew she was going to make it. She was going to be feisty. She was going to be trouble. She was going to be such a punk that it would be hard for me to get mad at her because I remembered her like this, so tiny and warm. Now, thirteen years later, when I see Converse on her little teenage feet, I know it all to be true.

Elena M. Aponte is convinced her Puerto Rican/Irish heritage is responsible for her love of all things witty and gritty. Her creative work has appeared in Barrelhouse, Jellyfish Review, Cheap Pop, and Matchbook Lit. Her non-fiction has appeared with Anime Feminist and Women Write About Comics. She is also the editor of Boricua en la Luna: An Anthology of Puerto Rican Voices, due in mid-2019. Check it out on Twitter @BoricuaEn. You can check her out on Twitter, too, @EMHilts.