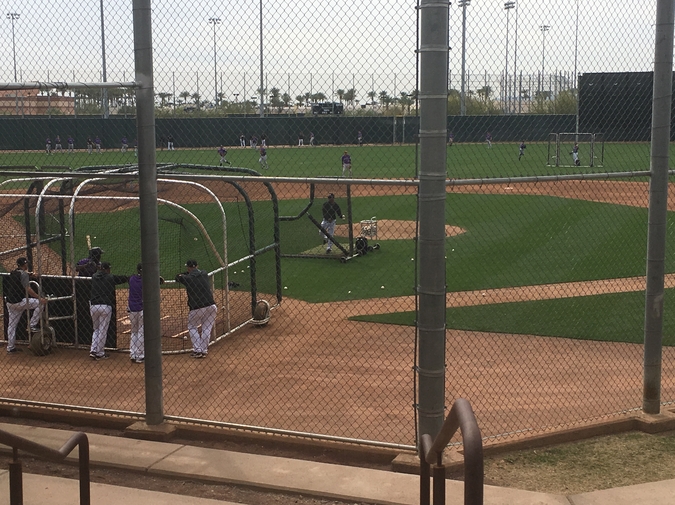 I hated Michael Thompson. But standing at the back door, watching Dillon playing ball in the yard, I couldn’t do it. I couldn’t tell him that his hero was a cheater.

For the third day in a row, Dillon wore his faded black T-shirt with 18 on the back and THOMPSON across the shoulders. The same player whose posters lined his bedroom walls, whose baseball cards sat in plastic cases beside his bed. At breakfast this morning, Dillon spouted all kinds of Thompson statistics. League-leading .346 batting average. A .640 slugging percentage. Most home runs in May. He said that Thompson could be the fastest to hit five hundred, a first ballot Hall of Famer, but I just nodded and sipped my coffee.

In his announcer voice, Dillon introduced the next batter, cupping his hands so the roar of the crowd could project farther through the yard. He scraped his back foot into the worn dirt patch beside the rotted tree stump then tossed the wiffleball up and swung. His bat met the ball with a thud of compounded plastic, and the ball sailed through the air, bouncing into the wire of the split-rail fence. Dillon raced across the lawn, touched the trunk of the oak tree, rounded the clothesline pole, ducking Thompson bedsheets, and stopped by grabbing the branches of the blooming rhododendron. White flowers trickled to the ground and nestled on top of the grass to the sound of simulated cheers.

The back door creaked when I opened it and when I let go of the handle, it crashed back into the frame. Dillon glared at me as if I were the one who just got accused of using PEDs.

He mumbled a hi.

“You see SportsCenter when you got home?”

Dillon said no, then, remembering the game, said we had to leave and rushed past me as if I were one of his ghost-runners, the smell of a deli counter lingering in his wake. The door whined open then slammed shut.

I listened to the vibrating hinges and tried to remember the last time I had inspired that kind of reaction. Two, maybe three years. Before Thompson or B.T. as I called it, I was sure of that. By the fourth horn, I changed into a pair of slacks and a collared shirt with tips that curled like wings and when I reached the driveway, Dillon was waving a gloved hand out the window and telling me to hurry up. He’d been waiting for this game for three months. Thompson only came to Philadelphia once a year.

The car sputtered to a start but checking the fuel pump could wait. I switched from sports talk to the news and once we reached the street, the warm air swirled through the open windows, drowning out the traffic reporter’s excited monotone. The neighborhood streets were empty. No stickball, no wireball, not even kick-the-can. His friends were probably inside working on their change-ups and curveballs using the A-B buttons and arrows. Dillon pounded his fist into his glove, emitting an odor of worn leather, oil, and dirt that blended with pollen and honeysuckles. A baseball smell that reminded me of trips to the Vet with my grandfather.

’93 had been different. The way that Phillies team busted up the Braves dynasty of the NL East. Game Six of the World Series, I was talking to my girlfriend, Jenny Santangelo, on the house phone, stretching the cord across the table so I could watch the bottom of the ninth over the half-wall between the kitchen and the living room. Wild Thing threw the ball like he’d fallen off a stool, and Joe Carter swiped it over the left-field fence. The cameras zoomed in as Carter jumped around the bases, his helmet falling off his head, fist pumps in the air. The mound stomp, the beat-down at home plate. It was like a gut punch every time they showed the replay. I don’t remember how long the phone beeped in my ear. The automated operator voice told me that if I’d like to make a call, to please hang up and try again. I couldn’t call Jenny back. Not after that. Instead, I left the phone off the hook and saved the tears for my pillow in the dark.

That was when I consumed baseball the way Dillon did. My dad, who spent six days a week in his body shop, scoffed at how much it interfered with more important things in life. Looking back at the way the era had changed the game, it was hard to argue. A pinched rotator cuff and a lingering meniscus tear were the only reminders of a promising career that ended in Class A. At least now I’d moved up from a cube to an exterior office and earned a reputation as the neighborhood mechanic. Saved Joe McGinnis close to three grand when I replaced his alternator last month.

I took a deep breath, inhaling the highway exhaust and blown tires on the shoulder as we passed the run-down factories with their popped-out windows. Pitching practice for the neighborhood kids. Dillon stared at the line of red brake lights ahead. His fists to the glove became more forceful. I had to tell him something. I’d held out long enough.

“Did you know my pop-pop grew up near Shibe Park?”

“I thought they played in Oakland.”

I adjusted my strap and cracked the windows, gripped by an eagerness that I hadn’t felt in years. I told Dillon how my grandfather used to jostle with his friends for the knotholes in the right field wall so he could steal glimpses of Ruth and Gehrig. Home run balls were a sign of respect. He and his friends had their own shift for the power hitters, Somerset for Jimmie Foxx and Al Simmons and 20th Street for just about any left-handed hitter. The Babe once hit one over the row homes beyond right field. My grandfather and his friends scattered after it, rumbling in the alley for minutes until Micky Callaghan emerged with the prized possession.

He watched the ’29 Series from his neighbor’s house on 20th street because he sold hotdogs to the guests on their rooftop seats. He could buy them from the street vendor for a nickel and sell them for a dime. In ’32, he saw Double X finish two home runs short of Ruth’s single season record. In ’41, he sat in the stands for DiMaggio’s streak and for the final games of Ted Williams’ .406 season. The summer before they all enlisted. My grandfather said he’d follow any of those guys to war.

I’d been talking with such vigor that I didn’t notice Dillon leaning toward the speaker, his face as white as Opening Day chalk lines.

He pointed at the radio, and I listened while the sports talk host berated his hero. The next caller said Thompson was a fraud, that he should be banned for life. I could feel Dillon’s reverence seeping out the window, my fatherhood duty along with it.

We pulled off the Broad Street Exit and passed a guy selling a fan of tickets on the street, another selling 2008 World Series T-shirts from his bulging pant leg. I parked in my grandfather’s favorite lot where JFK once stood, across from Citizen’s Bank Park. Beside us, a group of teenagers lounged on coolers and beach chairs behind a pick-up truck as a pile of their empty Natty Light cans rolled away in the breeze.

Greg Oldfield is physical education teacher and coach from the Philadelphia area. He received his M.F.A. in Creative Writing from Arcadia University, and his fiction has appeared in Barrelhouse, The Broadkill Review, and Soft Cartel. Greg was a finalist in Mythic Picnic's first Tweet Story Prize, and this past January he covered the Florida Cup. Twitter @GregOldfield21.